A is for Alphabet Book 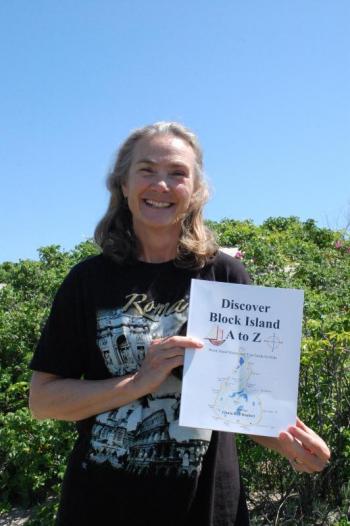 Hall Daubert took time out from setting up the bar at Winfield’s to show us her book. Signed copies are available at Island Bound now. Photo by Kari Curtis

To those who know her primarily as the longtime (29 years and counting) bartender at Winfield’s, the news come as a bit of a surprise. But the truth is she’s been pondering the book almost as long as she’s worked at Winfield’s.

“It’s a bucket list thing,” says Daubert, adding that she’s thought about doing it ever since her son Jesse, now 26 and a computer technician in Attleboro, Mass., was a little boy and played the game that inspired “Discover Block Island A to Z: Block Island History and Tour Guide for Kids.”

“Jess and I played Block Island ABC all the time when he was little,” says Gloria, explaining the concept of the book, which uses the alphabet to explore island geology, nature, history, and more. It’s not your standard A is for Apple alphabet book, however. Each letter, and each corresponding two pages in the book, has at least 4 or 5 subjects, and each is illuminated in a tone that’s child-friendly but full of information. It’s a fun book to read to a toddler, but also one that an 8- or even 14-year-old would enjoy reading on their own.

T is not just for Town Hall, but also Turtle, Terminal moraine and Taxi. The T tidbits come with political, geologic, environmental and tourist information. We learn, for instance, that Block Island is governed by a first and second warden and three council members and that you can research your island relatives at Town Hall to find out where they were born, who they married and what property they’ve owned. Daubert informs us, among other things, that you can find four types of turtles on the island: painted, spotted, snapping and, occasionally, leatherbacks, and that the reason the island is so rocky is that it is a terminal moraine, meaning it was deposited here by a glacier during the last Ice Age. And we learn that it would be fun to take a taxi tour of the island.

You don’t have to dig too deep to find out why this Winfield’s bartender was, in fact, perfectly suited to write such a book. For starters, her own family heritage goes all the way back to Settlers’ Rock (Trustrum Dodge is related to her through her grandfather on her mom’s side, so she’s that rare breed of true islander). Daubert grew up out here, graduating a year early from the Block Island School to attend Rhode Island College, where she majored in English literature and minored in technical writing. She worked for 11 years as a learning support aid in the elementary school system in Pennsylvania, where she and husband Rob Daubert spend winters. Finally her island day job is at Island Bound bookstore (yes, I is for Island Bound). Owner Cindy Lasser encouraged Daubert to get this off her bucket list sooner than later.

“For years I’ve listened to Cindy say we need a kids B.I. book to fill that niche,” says Daubert, adding that Lasser was a great help throughout, from urging her on to reading the manuscript to helping her find a publisher.

The real inspiration, though, was Jesse. Her son had gone back to school this winter for computer programming after getting an archaeology degree from URI and working in that field for a few years. “He came home at Christmas,” says Daubert, “and I  said hook me up on the computer — I’m going to pull out all those little slips of paper.”

When Gloria insists she’s a luddite you know she’s telling the truth when she informs you she still has a landline — and no cell phone. She really did need Jesse to “hook her up.”

The little slips of paper were the island ABC ideas she and her son had been coming up with for 20-plus years. Many of the items that ended up in the book are from those slips of paper and that long-ago bedtime ritual (R is for rebecca, Q is for quahog), some are added because they are such integral pieces of island history or culture (N is for Nature Conservancy; H is for Historical Society), while others simply needed to be part of any child’s island tour (I is for Isaac’s Corner; A is for Abrams Animal Farm). And then are those that were admittedly “a bit of a stretch,” because you can’t just leave out letters of the alphabet. The biggest challenge there was ‘X,’  says Daubert, who gave herself some creative license and let the letter appear in the middle of words.

“I had JaiXen of course,” she said, referring to her great grandfather George W. Jaixen, who was one of the island’s WWI veterans and was known for painting distinctive signs here, such as the one still hanging outside the Narragansett and the “Shore Dinners” sign in the dining room there. “I got lucky with Thomas Faxson, though,” admits Daubert, whose research turned up a Faxson on Settler’s Rock.

Even more difficult than finding words for X and Z, she said, was coming up with — and drawing — illustrations for each page. Daubert began with the text, finishing that pretty quickly. She spent all of January and February drawing. “I had never had an art lesson in my life,” she says, “but when I decide to do something I’m like a dog with a bone. I don’t stop. Some days I was at it literally all day long breakfast to bedtime.”

She ended up having fun with the pictures, adding in little extras so kids could hunt for all the things beginning with a particular letter. (Is that a tiny violin Verrazzano is playing?)

Her favorite picture is the one of Jesse on the dedication page. She drew him with their dog fishing off the dock, catching “Gus.”

“Gus lived under the dock and Jess must have caught him 100 times,” says Daubert, noting again how Jesse’s embracing of island life as a child was the inspiration for this book she hopes will inspire other children living on and visiting the island.

“Jess’s curious, scientific mind was so amazing to me. I had never even heard of a pipefish, for instance. Jesse would go out snorkeling under Dunn’s Bridge and tell me about all the things he had seen.” That night P would be for pipefish, as it is in the book.

Daubert sent her manuscript off to the printer in March and then checked off another bucket list item — heading off to Italy for 10 days with her husband and another couple.

“I don’t know. Italy was so much fun, I’m going back!” And she might return to book writing, too. “I’m thinking about a traditional ABC board book,” says Daubert. Block Island style, of course.

Hall Daubert will be signing copies of her book at Island Bound bookstore near the Post Office at 1 p.m on Saturday May 31st as part of the Taste of Block Island weekend.