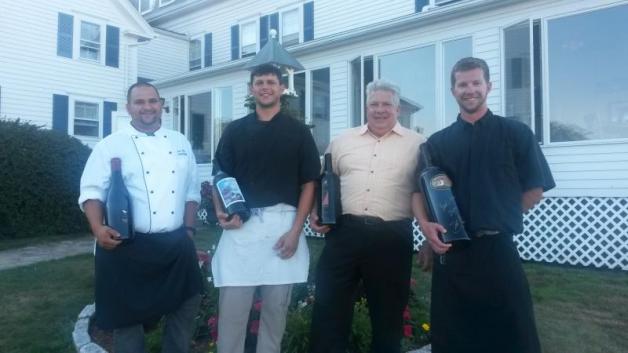 It’s evident as he excitedly gushes about the wine list at the Atlantic Inn, the island hotel he and his wife Anne own and manage. It’s evident, too, why the Inn and its restaurant, Restaurant 1879, have once again won a Wine Spectator award. In fact, they’ve won an award 14 years in a row.

Wine Spectator is a magazine that bestows three different types of awards on deserving restaurants: the Award of Excellence, the Best of Award of Excellence, and the Grand Award. According to its website, “Wine Spectator’s Restaurant Wine List Awards recognize restaurants whose wine lists offer interesting selections, are appropriate to their cuisine and appeal to a wide range of wine lovers.” The lists are scrutinized, down to presentation and grammar.

The Atlantic won the Award of Excellence from 2001-2008, and has won the Best of Award of Excellence each year since. The latter of these awards is presented to restaurants with lists that offer 400 or more selections, with either vintage depth or breadth across several wine regions.

According to Marthens, the Atlantic offers this breadth, and offers wines from all over the world, as well as from U.S. regions that aren’t typically thought of in terms of wine production, like Connecticut and New York.

The Atlantic Inn/Restaurant 1879 is one of only five restaurants in the state to receive what Marthens called “a big honor,” and the only restaurant on Block Island to receive it as well.

Over the last 20 years, when the couple first moved to the island, the Marthens have built a robust wine list. Marthens said he’d always been a wine enthusiast, but didn’t know the finer details. His staff at the time educated him, he said, and he and Anne, as well as several of the Inn’s staff members, traveled to vineyards, met the distributors and conducted lots of tastings. They still do all of these things, eager to improve.

“It requires a passion for wine, and investment in the product,” Marthens said of a diverse list.

The Marthens also encouraged the chefs at Restaurant 1879 to create menu items that would pair well with the wine offerings.

“It takes a lot of effort for the chefs to design a menu to complement the wine,” Marthens said.

They seem to have figured it out, though, as Marthens can tell a customer which wine would be best with his or her order at the drop of a hat.

If ordering the Smoked Pork Tenderloin or the Grilled New York Strip Steak, he’d recommend a Diamond Creek Vintage Cabernet. For the Lobster Ramen, a nice Chardonnay or Sauvignon Blanc will do. The perfect pairing creates an “explosion of flavor,” Marthens said, and enhances the taste of both the food and the wine.

Though he’s a wine expert, Marthens is not a wine snob.

Restaurant 1879 offers plenty of opportunities for curious tasters to find out what’s “good” for them. There are hundreds of bottle selections available, of which the Inn sells an “inordinate amount,” according to Marthens. There are 14 varieties available by the glass, seven red and seven white, that sell well, too.

The best way to find the perfect wine might just be to head over to the Atlantic Inn and sample one. Or two or three.

From the Block Island Times and the September 2014 Summer Times