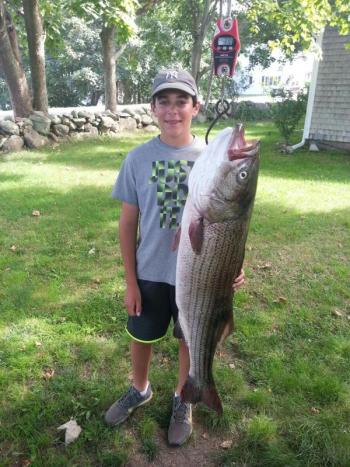 August is a month for slight changes in fishing around the island. The warmer water temperatures change the patterns for baitfish, which in turn changes the patterns for the bigger fish. For example, to find larger fluke in August, you typically need to fish deeper waters than you would earlier in the season. From shore, it's pretty much business as usual, with the addition of a few key species...
What a lot of people get the most excited about in August, is the arrival of the bonito and false albacore (albies). These small tuna typically arrive in the second or third week of August and stay through most of September. The main reason that they are so highly anticipated is due to how hard these little fish fight. If you’re lucky enough to hook one, they have the speed and power to completely strip your reel clean before you have a chance to react! If you’re fishing from shore, keep an eye out for the fast moving pods right on the surface. The best place to catch them from shore is at the Coast Guard channel using thin metal lures such as deadly dicks.
Striped bass fishing changes a little as well in August. Beach goers see more and more "schoolie" bass right along the shore in broad daylight. They can be tough to entice, but if you want to try, use something bright or shiny to catch their attention better. Night time when the water cools down is definitely better for larger bass from shore. From boat, August starts to slow down a little before picking back up again in late September.
In addition to the fish, squidding can be a lot of fun to try out. The warm temps are perfect for the squid, and on any given night you’re bound to do well off one of the piers in New Harbor. You can take your squid and use it as bait for the bigger fish as well!
August fishing on the island can be tricky, but rewarding. Go give it a cast!