B. I. Embraces the Food Truck Trend 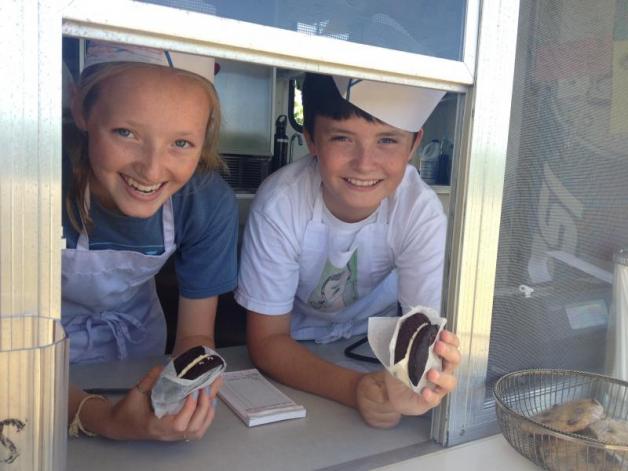 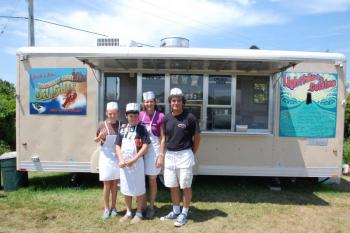 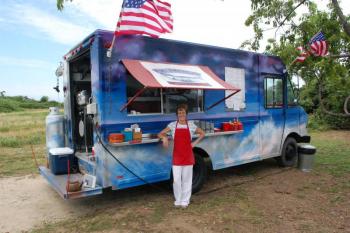 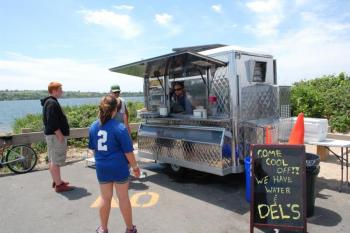 This summer, three food trucks have opened around the island after the town rewrote an ordinance to add more licenses. In previous years, there had been one Hawkers and Peddlers license, for a food cart at Settlers’ Rock. In August last year the Town Council voted 4 to 1 to allow up to three of the trucks and subsequently, according to Town Clerk Molly Fitzpatrick, approved the first three viable applications: Pots & Kettles across from Legion Hall, Southeast Light Delights at the Southeast Light, and the cart at Settlers’ Rock near the North Light.

Southeast Light Delights, run by André Boudreau and his family, serves classic New England food to tourists visiting the iconic red brick lighthouse atop the bluffs. The fare is proving so tasty and affordable, however, that there’s also a loyal island-resident following that is heading up Spring Street for lunch on the lawn of the lighthouse.

Boudreau has lived on the island year-round for decades. He owns a house-painting business that slows down in the summer and, with his son getting older (Jacques is 12), had been thinking it was the perfect time to start a family business.

When the town announced the addition of these licenses, Boudreau and his family immediately knew the Southeast Lighthouse was the perfect location for one. They live next to the lighthouse because Boudreau’s wife, Lisa Nolan, is the executive director of the Southeast Lighthouse Foundation. Every summer tourists knock on their door looking for water, information and more. The lighthouse is one of the most popular tourist attractions on the island and, as it’s a one-and-a-half-mile mostly-uphill walk from town and on the way to the Mohegan Bluffs, André and Lisa knew a food truck would answer many a visitor’s desire to grab some lunch or snacks on the run without having to return to town.

Boudreau’s menu speaks to his memories of growing up on the New England coast with seafood, sandwiches and hot dogs. “The inspiration was nostalgia, when you go to visit the seashore as a kid,” Boudreau said. The menu includes cold and hot lobster rolls, grilled cheeses, caprese rolls and some signature dishes: lobster grilled cheese and the Upper Crustacean, a cold lobster roll with crispy bacon and melted Manchego cheese. All the food is made to order.

For dessert there are old-fashioned Good Humor ice cream bars, Del’s lemonade, and whoopie pies, made by Kate Musso from Sugar Rush B.I., which are rapidly developing a cult following.

“I’m selling things I like,” says Boudreau, “and hoping other people like it, too. But if they don’t, you can change your menu any time, that’s the beauty of a food truck.” In the coming weeks, Boudreau plans to add a chow mein sandwich to his menu, an item made famous in Fall River,  Mass., right over the Rhode Island border.

Boudreau plans to stay open in the off-season as well, at least through the fall and maybe beyond. “Living here year round… I see a day where we’re pulling this thing up to the ice-skating pond,” he says.

Check out his facebook page for menus and more at www.facebook.com/seldelights.

Pots & Kettles, Cindy Kelly’s food truck at the start of the West Side near the Legion Hall, offers fresh, seasonal, from-scratch, healthy and affordable dishes that she plans to serve year round.

Kelly began cooking during college when she and her roommate decided to eat healthier and realized that in order to do so, they had to make the food themselves. After many years working in construction on Block Island, she was inspired to provide other islanders with healthier, quicker options during the offseason. “I’ve been aware that it’s a challenge to get good food when you’re working really hard in the winter, it’s limited, I think there are more people wanting to eat out than there are food options,” Kelly says.

When the town announced in the fall that the ordinance was to be rewritten to include licenses for up to three food trucks, Kelly decided it was the perfect opportunity to start her food business. After a long application process in which she had to create a business plan and mission statement, she received one of the licenses and got right to work. “Cindy wanted to do everything from scratch. She wanted it to be affordable, healthy, something people could eat all year round,” says Pots and Kettles Employee Angus Gracey.

The process leading up the truck’s opening included finding and painting the truck, creating a menu and picking a location. Although it was targeted toward islanders during the off season, by the time Kelly finally opened up, it was almost summer. So, Kelly realized she had to adjust her menu for the summer crowd. “The whole concept of this truck is offseason, I didn’t really think about the summer until it was here,” says Kelly.

The current menu is filled with fresh, organic options including grilled cheese sandwiches, quinoa salad and many delicious desserts including frozen bananas dipped in chocolate then rolled in peanuts or coconut. (Oh, and if you happen to be there when the oatmeal chocolate chip cookies come out of the oven, you have to treat yourself.)

Additionally, there are daily specials and gluten free options. Some customer favorites are the sweet potato and black bean taco that’s topped with roasted kale and the bratwurst sandwich, with bratwurst that’s been simmered in stout beer with onions and jalapenos and then grilled on rye bread with melted swiss cheese and served with grainy mustard.

The bratwurst was added at the request of Cindy’s  husband Gene Hall and it’s the only thing on the menu that contains processed ingredients. Other than the bratwurst, everything is made from scratch daily by Kelly and Lisa Sprague. Word has traveled fast about the good food at this truck and there seems to have been a steady line since it opened in June.

Although some may view running a food truck as an easy task, it certainly is not for Kelly, who works 18-hour days for the business. “I feel strongly about it being something that’s going to work with the community, it’s not just a quick-buck thing, it’s a real passion for me to have a business that feels rewarding and has a purpose,” she says. Kelly will start to add hotter items to the menu for the winter months and also plans to serve more takeaway meals in the winter so customers can easily grab them and go.

Check out her facebook page for menus and more at www.facebook.com/pages/Pots-and-Kettles.

The food truck at Settlers’ Rock, the parking lot of the North Light, serves up delicious grilled sausages and hot dogs.

Owner Ben Edwards, who grew up on the island, had been watching the recent popularity of food trucks, so when it was announced that up to three licenses were available, he knew it was something he wanted to be a part of. “It’s a movement that’s so trendy, that’s doing really well right now and it seemed like it would be worthwhile doing it here,” says Edwards.

Edwards also sells water and Del’s lemonade. A lot of water and Del’s — which isn’t a surprise when you consider the location at the very end of Corn Neck Road, four miles from town.

Many tourists simply want to cool off after the long bike to the lighthouse, says Edwards. He decided to start with a simple menu. “I would like to expand the menu but for now we want to execute what we can, and learn and add as we go forward,” says Edwards. So far, he says, no one item has stood out as the most popular, and each day differs in terms of what sells best. But customers do seem to be loving the Rhode Island hot dogs, which come with many toppings, including red onions, caramelized onions and relish.