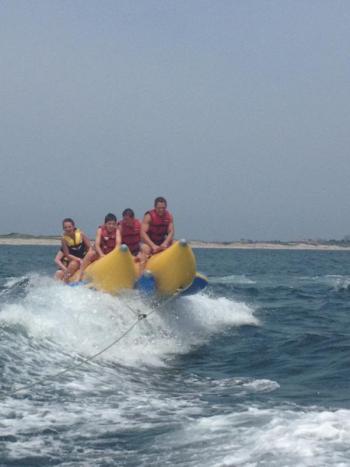 The author and fellow banana boaters discover the thrill of speed, flip turns, and falling off. That's her, in black tee and yellow life jacket, on board and in the water below. Photos by Mason Littlefield 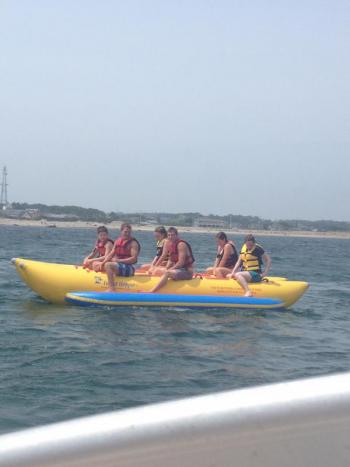 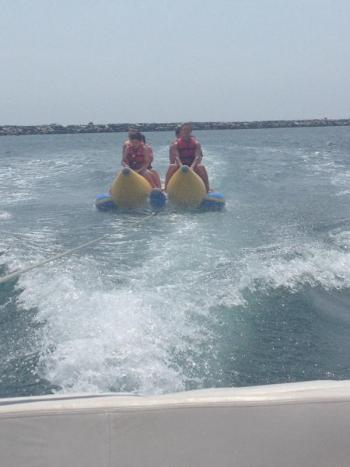 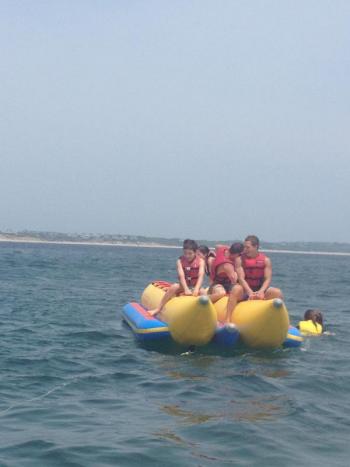 From a distance, I have often watched the banana boats serpentine through the harbor. With great curiosity, I would listen to the shrill cries of the people aboard these absurd canary yellow, banana-shaped tubes as they tore through the water with accelerating speed. I would watch them send a few waves back to shore, leaving behind a wake large enough to resonate with the beachgoers. Today, I am not an observer. I do not look upon these riders with envious eyes. Today I ride.

As we suit up in the armor of our large, puffy life jackets, the five other future banana boaters and I exchange words of excitement and anxiety. I learn that the two teenage boys are from Connecticut, and that one has a summer house on Block Island. The family of two teenage sisters and their younger brother happen to also live in Connecticut, just one town over from the teenage boys. I think of how the world can feel so small, so secure in its familiarity and happy coincidences as we make our way from the dock at Old Harbor onto the white, cushioned banana boat platform below. In doing so, we turn our backs to the harbor, grabbing hold of the rungs of the small, makeshift ladder.

Once aboard, we receive instructions from the man at the helm of the boat that will tow us for the 30-minute ride. He tells us to look out for one another if someone happens to fall into the water. He gives us the sign that tells him to stop the boat: running your hand under your neck. Finally, we board the boat. I climb onto the back, tightly gripping the handholds. We ripple through the water, watching the dance of boats pulling in and out of the marina.

As we accelerate out to sea, mist and the undulation of waves embrace us. Some of the boaters dip their toes into the water. Others free their hands from the holds, reaching toward the sky. I think tranquil thoughts, enjoying the speed and freedom of being on the water. The sea is smooth. Suddenly, the boat towing us makes a sharp “doughnut” turn and all of the people in the back, including me, are thrown into the depths.

Someone still on the banana boat signals that we have fallen off and the tow boat abruptly stops. Those of us who have fallen off swim into a group and, together, slowly make our way to the boat. As we tread, the crest of a large wave pulls us momentarily under the surface. The swim toward our floating banana in the sea feels almost Sisyphean, but we eventually climb onto the boat, drenched, exhausted and laughing.

I soon realize that the excitement of banana boating is akin to that of watching a psychological thriller film. You hold on tight, fully aware that you’re going to be thrown off, but not really believing in the inevitability of your expulsion into the void until it happens, making each period of calm at once both suspenseful and relaxing.

After 30 minutes of doughnut turns, eerie calm and treading water, we start to head back. I am exhausted and relieved to see the familiar face of Old Harbor. I’m also happy to be surrounded by my fellow banana boaters’ smiling faces and their cheery chorus of “can we do it again, please?” Banana boating is a thrill and a real bonding experience. On the water, you can see a group of people, many of whom previously were unknown to one another, help the sea-fallen back into the boat. You can witness — and participate in — people coming to one another’s aid, protecting them from the fathoms. It’s one wild ride. But be prepared: you will get wet (and you may lose a shoe)!