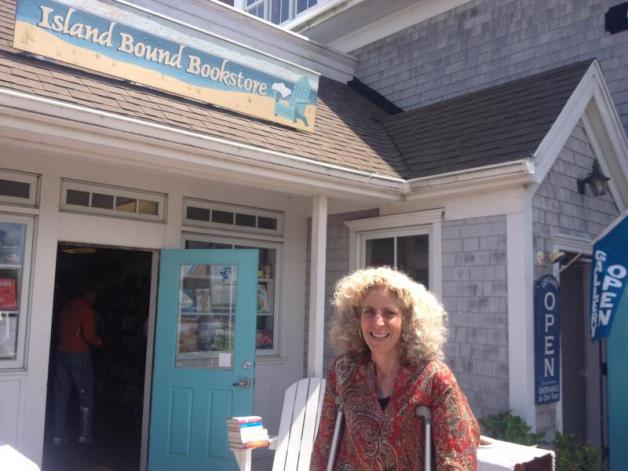 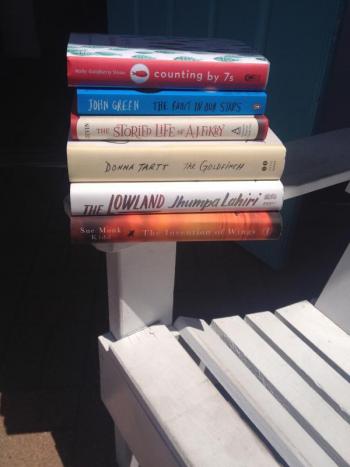 Cindy Lasser, owner of Island Bound bookstore, shares a few books she thinks would be perfect for your summer beach bags.

The Storied Life of A. J. Fikry
by Gabrielle Zevin

A charming and quick read about selling books and finding love, this novel takes place in an adorable independent bookstore called Island Books on a small island that could be Nantucket. The curmudgeonly bookseller, A. J. Fikry, has recently lost his wife and is spiraling downhill fast due to alcohol and depression — until a series of events begins to change his life. It’s fun to watch the entire island community become involved with this man who was once so hands-off. And the many fun references for book lovers, such as titles, author events and book clubs, make it a very likable literary love story.

The Goldfinch
by Donna Tartt

This is the winner of the 2014 Pulitzer Prize for fiction and what a terrific book it is. It even prompted me to drag my husband to New York to see the famous 1654 Goldfinch painting by Dutch artist Carel Fabritius that the book is titled after. The plot revolves around a terrorist bombing in the Metropolitan Museum of Art that turns 14-year-old Theo Decker’s life upside down.

His mother is killed and, without thinking, the traumatized Theo snatches her favorite painting, The Goldfinch, from the wreckage. The theft, coupled with the derailment of his life, plunges Theo into a morass of drug addiction, alcoholism and art fraud.

The book is chock full of fabulous characters: Theo’s degenerate father; an antique dealer named Hobie who takes Theo under his wing; a dangerous high school friend named Boris whose access to drugs and violence practically destroys Theo; the wealthy Park Avenue clan that takes Theo in; and finally Pippa, whom Theo is utterly obsessed with. The novel takes us from New York to Las Vegas to Amsterdam.

The Lowland
by Jhumpa Lahiri

Jhumpa Lahiri’s novel involves the Indian-American immigrant experience. It is beautifully written; she never disappoints in that area. The story spans 70 years, opening with two brothers in Calcutta. The two are very close, though vastly different. Subhash, the older, is cautious and reserved while the younger, Udayan, is a charming risk-taker. Udayan becomes involved in Indian radical militancy. Subhash, who does not share his brother’s political passion, heads to the University of Rhode Island to do research. Those of us who know Rhode Island well will love the familiar places he visits.

The story returns to India when Udayan meets a tragic end and Subhash goes back to the lowland outside their  home hoping to pick up the pieces of a shattered family, and to heal the wounds Udayan left behind.

The Invention of Wings
by Sue Monk Kidd

A ten year old slave Hetty “Handful” Grimke is given to Sarah Grimke (a real-life figure) on Sarah’s 11th birthday. They become fast friends — in secret of course. Sarah breaks the law by secretly teaching Handful to read and write. When they are caught, Handful receives a lashing, while Sarah is banned from her father’s library and all the books she loves. Sarah eventually leaves her wealthy Charleston family to join the abolitionist and women’s rights movements. Meanwhile Handful is physically imprisoned by Sarah’s cruel slave-owning family. Told in first person, the chapters alternate between the two main characters’ perspectives, as we follow their unlikely friendship from childhood to middle age.

Willow looks forward to a fresh start at Sequoia Middle School, where she hopes to fit in better than she had at former schools. Her new best friend is a Vietnamese girl named Mai Nguyen who has a surly brother, Quang-ha. Willow begins to teach herself Vietnamese and is feeling great about having some friends. Then her parents are both killed in a car accident and Mai Nguyen takes her home to her mom, Pattie nee Dung, proprietor of Happy Polish Nails. Willow’s new friends are determined to protect her and will do anything to make sure she is not sent to a foster home. This is a feel-good book with a wonderful message about family not necessarily having to do with blood.

The Fault in Our Stars
by John Green

Hazel Grace Lancaster, a three-year, stage IV cancer survivor, is depressed. To help her deal with this, her doctor sends her to a weekly support group where she meets Augustus Waters, a fellow cancer survivor. They soon fall in love, although both know that their time is limited. Hazel fixates on how her death will eventually hurt her parents and Augustus obsesses about how he will be remembered. Hazel has to lug a portable oxygen tank with her wherever she goes, and Gus has a prosthetic leg. This is a not-to-be-missed novel about two teenagers who fall in love and are forced to submit to unfathomable physical and emotional challenges. Yet somehow the story manages to be uplifting.