Cindy at Island Bound bookstore (the crutches are due to a knee injury) and some of the books she recommends reading this summer. 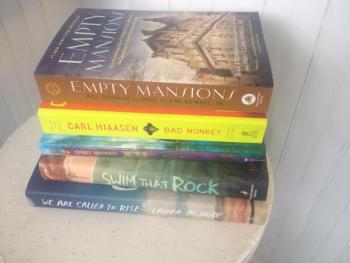 A look at some of this summer’s most popular reads, fiction and non-fiction, adult and young adult, from Cindy Lasser, owner of Island Bound Bookstore.

We are Called to Rise

This is my favorite book of the summer. Four narrators tell a story set in residential Las Vegas. Avis is facing the unexpected end of her marriage and the fact that her son has returned from Iraq broken and abusive. Roberta is a court-appointed child advocate. Bashkim, 8 years old, lives with his Baba and Nene, Albanian refugees who run an ice cream truck. Finally, there’s Specialist Luis Rodriguez-Reyes, who wakes up in Walter Reed hospital, injured and traumatized after losing his best friend in Afghanistan. This is an incredible story about four people from different backgrounds and circumstances who collide in unimaginable ways.

If you haven’t read Carl Hiaasen, it’s time; he is very funny. Hiaasen is a Floridian who is an investigative reporter and columnist for the Miami Herald, so he is never at a loss for inspiration. Here, a Key West tourist snags a human arm while fishing and, through a series of odd circumstances, suspended cop Andrew Yancy ends up storing it in his freezer while investigating what he suspects is a murder. Soon he stumbles, in true Hiaasen style, into massive Medicare fraud, tourist hustles — and a voodoo witch.

The true story of the very unusual life of Huguette Clark, who was born during the Gilded Age and who, at 16, inherited nearly 300 million dollars from her father. She had few friends; even the doorman that worked in her building had not seen her in 20 years. The last known photo of her was from 1928. She spent millions on dolls and priceless works of art.

When she died in 2011 at age 104, she owned palatial homes in California, New York, and Connecticut, but had never lived in any of them. While still in excellent health she chose to live in the Beth Israel Hospital in New York instead of her Fifth Avenue Mansion, and that’s where she spent the final 20 years of her life.

Philbrick takes real stories and writes them so compellingly they seem like fiction. This one is about the Boston battle that ignited the American Revolution and the ordinary citizens who became invaluable in the effort to fight the British. He traces the roots of the war and makes it easy for the reader to understand the events and the people who made them happen, illuminating the Boston Tea Party, the Battle of Bunker Hill, and much more.

For Kids and Teens

This first book in a seven-volume series takes place in the world of Erdas, where every child who comes of age must drink a special Nectar to discover if they have a spirit animal, a rare bond between human and beast that bestows great powers to both. Along with these Great Beasts they must defend the world from the Devourer, an evil enemy who has returned to Erdas.

“Swim that Rock” takes place right in Narragansett Bay and the waters off Rhode Island, including Block Island. Because his widowed mother is in jeopardy of losing her diner, Jake goes to work as a quahogger on the Bay (his father had ben a quahogger). This is a fast-paced coming-of-age story, filled with great characters including fishermen, clammers and a scrappy boat captain, that illustrates how challenging an occupation commercial fishing can be.

*Island Bound and the Island Free Library are sponsoring a talk and booksigning with Jay Primanio on Thursday, August 7, at 7 p.m. at the library.