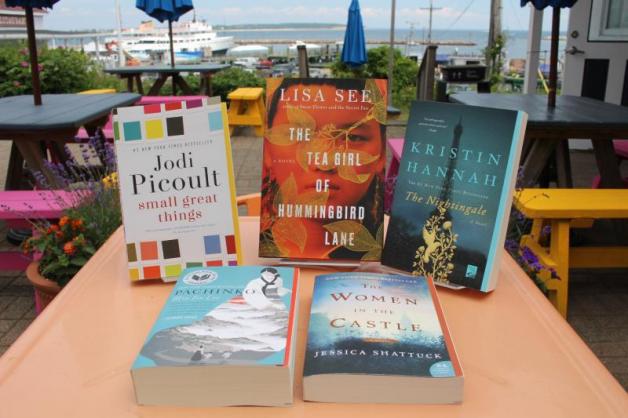 “Small Great Things” by Jodi Picoult
Based on a true event, a nurse, who is a woman of color, with years of experience in the obstetrics unit of a hospital in a small town in Connecticut is told by a white supremacist man that she cannot provide medical care to his wife or his newborn son. The crisis that results causes her to confront her lifetime of beliefs about herself as a woman of color in the United States. Piccoult forces us to consider how individuals from different backgrounds — or even the same backgrounds — think about and act upon their beliefs about race. “Picoult says this novel represents her grappling, as someone ‘white and class-privileged,’ with issues of racism, both individual and institutional. ‘I was writing to my own community — white people — who can very easily point to a neo-Nazi skinhead and say he’s a racist . . . but who can’t recognize racism in themselves.’” (The Washington Post) This book forces the reader to think deeply about herself or himself. It is a gripping read and it stays with you for days.

“Women in the Castle” by Jessica Shattuck
A story involving three widows whose lives and fates become intertwined, ‘Women in the Castle’ takes place at the end of World War II. An affecting, shocking, and ultimately redemptive novel, Shattuck combines piercing social insight and vivid historical atmosphere, offering a dramatic portrait of war and its repercussions that explores what it means to survive, love, and ultimately, to forgive in the wake of unimaginable hardship. A New York Times bestseller, “Women in the Castle” was a GoodReads Choice Awards Semifinalist.

“The Nightingale” by Kristin Hannah

A New York Times bestseller, Wall Street Journal Best Book of the Year, and soon to be a motion picture, “The Nightingale” is set in France during World War II and is the story of two sisters separated by age, experience, and life paths, who are confronted with impossible choices in order to survive. It is a heartbreakingly beautiful novel that celebrates the resilience of the human spirit and the durability of women. A novel for everyone.

“Pachinko” by Min Jin Lee
“Pachinko” chronicles four generations of an ethnic Korean family, first in Japanese-occupied Korea in the early 20th century, then in Japan itself from the years before World War II to the late 1980s. Pachinko, the slot-machine-like game ubiquitous throughout Japan, is the metaphor for how chance determines so much of fate. This is a vivid, immersive multigenerational saga about life for Koreans in Japan as well as a tale of resilience and poignant emotional conflict that also explores issues of identity, homeland and belonging. “Much of the novel’s authority is derived from its weight of research, which brings to life everything from the fishing village on the coast of the East Sea in early 20th-century Korea to the sights and smells of the shabby Korean township of Ikaino in Osaka – the intimate, humanizing details of a people striving to carve out a place for themselves in the world.” (The Guardian) A great read with women as the main characters who shape their lives even as they push the restrictions of a paternalistic culture!