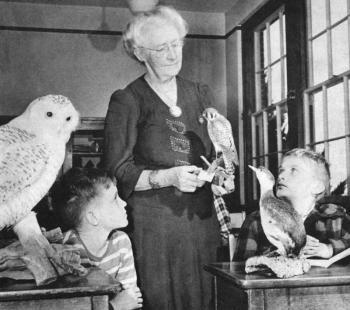 In 1948 a Providence Sunday Journal article pictured Miss Dickens displaying a sparrow hawk to Larry Rose and Lester Littlefield. On the left is a mounted snowy owl, on the right a horned grebe.

Kim Gaffett and the Ocean View Foundation’s bird walks and bird banding demonstrations are two of many island traditions that are born of a rich legacy, that of Miss Elizabeth Dickens. Historian Robert Downie wrote about that legacy for the weekly Block Island Times and Edie Blane added her own childhood remembrances:

One Robin
by Robert Downie
Fifty-one years ago, on June 12, 1963. Elizabeth Dickens, an 85-year-old lifelong islander, entered the temperature in her diary as “55” degrees, followed as usual by the birds she had seen on her sweeping farmland near Southwest Point: “1 Barn Owl, 1 Crow, 1 Pheasant, 6 Barn Swallows, 5 Redwings, 2 Song Sparrows, 1 Northern Yellow Throat, and 1 Robin.”

Presumably, that “Robin” was the last bird she ever recorded on a piece of paper, capping 50 years of daily written accounts of her bird sightings.

Passing through her years like a steady vessel at sea, Elizabeth Dickens had emerged in the last half of her life as the Block Island’s ship-of-state — the most well-known, beloved, written-about person of her lifetime on the island — all because of birds. Due to her, binoculars replaced on Block Island the gun barrels of turn-of-the-century bird hunters, and the island’s fame as a welcoming mat for both the birds and their watchers spread.

Living at the end of a dirt road, facing the sea and the setting sun, Elizabeth Dickens must have led one of the last pure island lives. Surrounded by silence — cut off by that rutted lane from the noises of cars and trucks, and by time from the din of planes and mopeds — her world was the sound of wind changes, barnyard animals, and the singsong of a bird or the whoosh of an entire flight.

In the fields around her, she could bask in the sun’s warmth on a cool fall day. No soap opera on TV in the afternoon for her. No romance novel or courtroom paperback filled her time. Outside, the book of nature was spread open, its pages turning magically by themselves — from morning to evening, from winter to summer. And she recorded that world by listing her observations on the empty pages of notebooks: each bird sighted on each day, each book comprising five years’ worth of days.

She started her bird diaries in 1912 at the late age of 34. Two years later she began teaching classes in bird lore to the island’s school children. Both endeavors would last some 50 years.

By the fateful month of June in 1963, the living room of Elizabeth Dickens’ small family homestead was stacked with piles of her diaries, and with binoculars and other bird-related items lying nearby. Among them were articles that had been written about her in newspapers, ornithology journals, and popular nationwide magazines such as Life and The Saturday Evening Post.

She was visited by friends the next morning, having been missed at the High School graduation she annually attended. As described in Herbert Whitman’s biography “Elizabeth Dickens, the bird lady of Block Island,” published in 1982:

“They found her lying in the long grass between her house and the barn with a soup can in her hand. The back door of the house was open and the lamps, their chimneys standing beside them, were ready to be lit … Elizabeth was barely alive. Her arm was broken.”

She was hardly able to talk. The next day, after transportation to Westerly on the mainland, Miss Dickens died. Islanders would no longer hear her familiar phone call: “Run to the window and look at the sunset!”

As the woman who taught generations of island children to appreciate not only birds but all of nature, her stature has only grown since her death. In the 1986 book “A World of Watchers” by Joseph Kastner, she dominates a chapter titled “The Imbuers: Elizabeth Dickens and the Woman Writers.” Her literary company in that book would have pleased her: from Audubon to Forbush to Roger Tory Peterson.

If you look past the many modern summer homes, you can see much of what Miss Dickens saw. And a large portion of her former farmland is now preserved as the Lewis-Dickens Nature Preserve, with a public path stretching toward the sea.

Remembering Miss Dickens
by Edith Blane
When I opened the June 16 issue of the Block Island Times I was pleased to see the article about Miss Elizabeth Dickens written by Bob Downie (one of his best articles). It brought back many memories of my school days and our monthly bird study classes. I was fortunate to have them with Miss Dickens from first grade in 1935 to graduation in 1947.

Miss Dickens had very piercing blue eyes, white hair drawn up on top of her head and was always very neatly dressed. I think she suffered from bad feet for she wore black high top sneakers in winter and white ones in summer.

From time to time Miss Dickens would invite one or two girls in the 8th or 9th grades to come to her house for dinner. I remember going with Barbara (Dodge) Hall and Ann Moran. We went on the school bus to the road we now know as Southwest Point Road. We cut off on Dickens Road, following the winding laneway through four or five gates, shut to keep cattle and livestock on their home meadows.

We arrived in the late afternoon very excited to be at Miss Dickens’ home. She met us at the door, binoculars in hand, and told us we were to go on a bird walk before dinner. What a treat it was to walk over the meadows, having a chance to look through the binoculars and to have her tell us how to recognize the birds, their plumage and their calls. There were no nearby houses and I felt as if I was walking over the moors. We could see and hear the ocean from Miss Dickens’ small house.

We arrived back at the house and our grand treat of dinner out awaited us. I can only remember having cold, home canned turkey and a very tart condiment. I am sure we had vegetables and potatoes (it would not have been a Block Island meal without potatoes) but I cannot remember. But I can still recall the condiment. It was a clear, golden brown color with bits of some fruit or melon in it. I wish I had asked what it was but I was shy and so overcome by dining out that all other things went out of my mind. The turkey had been canned in glass jars by Miss Dickens; she raised turkeys. For dessert we had a layer cake with whipped cream. I was so excited I could scarcely eat.

Because we had long walks to get back home, the dinner was served early. It was late spring with plenty of light, so we could get home before dark. Barbara and Ann lived on Connecticut Avenue and High street respectively, but I had to walk all the way down the Neck. Believe me, that was a long trek, but we thought nothing of it for we all walked wherever we needed to go. Not many folks had cars.

As an adult I realized how the classes and bird walks with Miss Dickens enriched my life. To be able to hear a bird call when in my house and recognize the bird is all due to her teaching. For instance, I remember what she said about the little goldfinch — that he wears his little black beret and is one of the few birds that sings in flight, saying “two and twenty.”

For years I had tried to find a dead bird that was in good enough condition to be stuffed, mounted and added to the bird collection. Finally, at age 14, I found a piping plover that Miss Dickens said was in fine condition to be stuffed. So my bird is in the collection, with the date I found it and my name then — Edith Littlefield — written on the small tag in Miss Dickens’ distinctive hand writing.

It seems like such a small thing now, but to me in those days, it was a big deal.

Want to see and know more about Miss Dickens and the birds of Block Island? Visit the Elizabeth Dickens Room on the first floor of the Block Island Historical Society; you can even arrange a special tour that includes a trip to the school to see the bird cases by calling the Society at (401) 466-2481.