The Block Island Oyster Company and Raw Bar at the Beachead 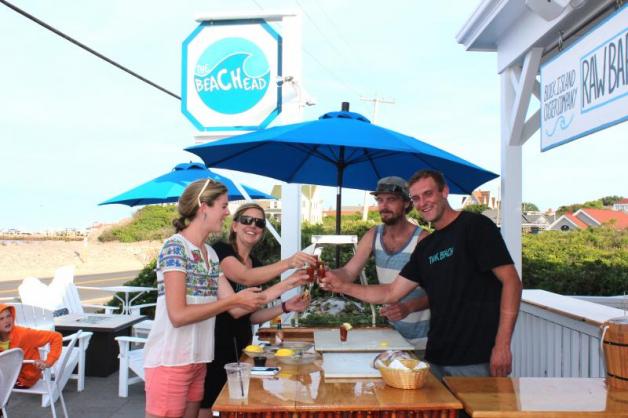 Above: The author, in red shorts, and a friend test some shooters with the boys. Below: Perry Phillips at the helm of The Flow with first mate Ahi; Dave Deffley shucking at The Beachead, which is conveniently located on the Great Salt Pond, meaning that the Oyster Company haul does not have far to go to get to the Raw Bar, and the oysters you get — on the shell or in a shooter — are as fresh as can be. Dave and Perry collect, sift and cull in preparation for the afternoon’s Raw Bar. All photos by Sara Dunleavy Berge

I watch oyster farmer and entrepreneur Dave Deffley swim out to his boat; while I take photos from the dry shoreline my sense of adventure pales in comparison. He swings around the back pond and picks me up at the Hog Pen, camera and note pad in tow. Once aboard, I find a place to perch amidst tubs of fishing line where I think I’ll be steady enough to jot some notes. It’s Tuesday of July Fourth week and the harbor is the fullest it’s been this season, yet that magic hour around dusk has left the pond hushed. Maybe everyone’s at dinner. If they’re lucky they’ve made their way to the Beachead to discover The Block Island Oyster Company Raw Bar.

Enter Dave Deffley and Perry Phillips. They’re young, they’re Rhode Islanders (Deffley hails from various mainland locales, and Phillips from Block Island), they know a thing or two about oysters, and trust me, you won’t mind the view while they’re shucking. The first words out of Dave’s mouth after I climb aboard their red vessel are, “I think I’m having a battery problem,” followed by a long pause. My heart sinks a little as I prepare for our cruise around New Harbor and the oyster farm to be postponed. “The radio battery, which is a big problem in my book.” I’m just happy to be tooling around, but reggae is a priority for these boys. Dave jerry-rigs some tunes as we cut the still water toward the back pond.

Their lease in the Great Salt Pond came through last spring from Block Island Maritime Institute (BIMI). “We wouldn’t be where we are today without BIMI,” they both echo. As part of their lease agreement they provide educational programming for inner-city youth who visit in the summer. You can see in their eyes that it’s not just part of the job. These two are passionate about their craft and they enjoy giving anyone a tour of the farm, particularly “newbies” and kids, they tell me. Now standing waist deep in waders, they pull up bags of their precious cargo for me to examine. I can imagine the thrill of sharing this with someone who’s never been on the water before.

But don’t be fooled, Deffley and Phillips are hardly just cruising the pond admiring their ever-growing crustaceans, which will number more than 250,000 by September. This farm-to-table operation requires a fast turn-around to ensure ultimate freshness. It’s lucky for them that their plot backs up to the Beachead, where the fruits of B.I. Oyster Co. are reaped. A raw bar on the Beachead patio (which also boasts an inviting fire pit) means Deffley and Phillips are not only farming, but working the restaurant end of things as well. In order to keep those “bucks for shucks,” as their tip jar reads, coming, there are times that a mid-shift run out to the farm becomes neccessary. But they are committed to every step of the process.

“We’re really excited to have them; it adds a great element to the restaurant,” says Beachead owner Becky Pappas Clark, who is particularly pleased with Dave and Perry’s participative approach with guests. When they get an order from the waitstaff, one of the boys is sure to hand deliver the oysters to the table and let people know exactly what they’re getting.

In addition to their own oysters, Deffley and Phillips are partnering with Matunuck Oyster Farm, which has a similar farm-to-table operation just across the water, and East Beach Blondes, also grown nearby in Ninigret Pond in Charlestown, to bring some variety to the Beachead. As Deffley explains, the oysters taste like the body of water they come from, making each of their tastes unique and impossible to replicate. The Block Island oysters are sweet, clean and briney (due to a higher salt content), whereas the East Beach Blondes are mild and smooth. The Matunucks, also briney, can be further described as buttery and robust. The oyster boys would recommend sampling all three!

B.I. Oyster Co. is offering some of the freshest oysters you’ll ever get your hands on. Get in line during lunch and dinner at the Beachead, and especially don’t miss Buck-a-Shuck, that’s right, one dollar oysters at happy hour, Monday to Friday, 3 to 4 p.m. The boys would be happy to shake a spicy oyster shooter for you too!