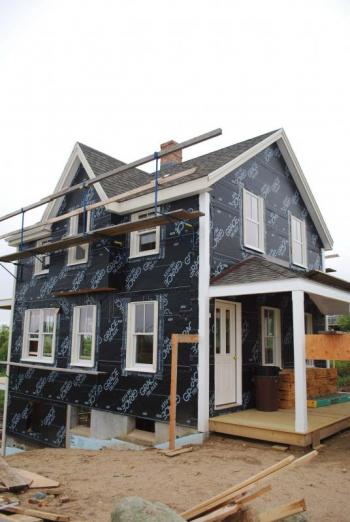 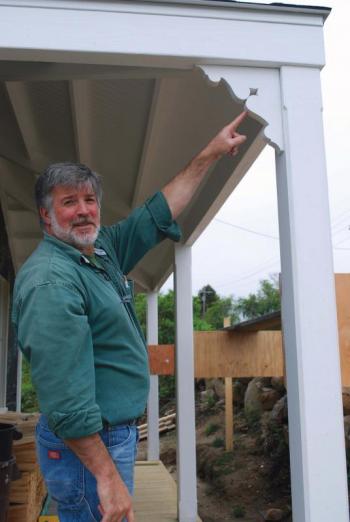 I’m standing with builder Norris Pike on a work-in-progress deck looking out over a meadow in spring bloom to the Weather Station on one side and New Harbor and Great Salt Pond on the other.

“This used to be my cousin’s lot,” says Norris. “He was a fisherman, see that’s where they tarred the nets.” Fishermen out here used to pour tar over their nets to strengthen them and, sure enough, the stone wall that divides this property to the north looks as if someone dumped black paint on it. It’s as if fishermen were working here this morning instead of half a century ago.

This house in progress on Center Road is being built by Norris and I asked him to meet me here to talk about it, because it’s so simple and yet so beautiful. Everyone who sees it comments on what a sweet little house it is. I know that sweetness is all in the details, so I want Norris to show me those details.

He’d originally intended to keep this house, to live here himself, he tells me, but ran into the financing problems everyone seems to be having these days. So he sold it to a couple with two young kids.

The floor plan is straightforward: two bedrooms, one bath up; another bed and bath with laundry in the basement; and an open kitchen and living room on the main floor. In all, it’s just about 1,000 square feet.

“It’s all the house you really need,” says Norris, with more than a trace of longing in his voice.

The simplicity and size makes sense out here says Norris, stopping to pull a birds nest from the rafters. (The baby wrens flew this morning and he wants me to give the nest to my daughter.) There’s the cost of utilities, upkeep, taxes, “the whole show,” he says. “In a big house just cleaning windows is a full time job, not to mention the lawn.” Here, he says, “you just need a pair of scissors once a year.” Which may be overstating it slightly. I’m with him on the main point though.

This is what Norris considers “a real Block Island house, a story and a half with a porch.”

From the road, the porch is one of the things you notice. Apparently what makes it so attractive, and so island-traditional are the roof hips and the purlin framing, the horizontal framing between the rafters. rafters new porches tend to be.

“That’s the way they always did it on this size house,” says Norris, whose sense of tradition stems from growing up here and taking it all in on drives with his parents. He shows me another house he’s working on that follows island tradition.

Gene Rankin’s home off Cooneymus Road burnt to the ground not long ago. It was a little house, also around 1,000 square feet, and, according to Norris, Gene was adamant that it not be enlarged. He had to live around his two pianos and told Norris that he once had 75 people in here for a piano concert. Still, he just wanted his old house back, “to the inch,” says Norris.

The house had been lived in since the early 1800s and hadn’t changed that much in rebuilds and renovations over the years. Other than “tuning up the floor plan a little bit,” it didn’t change much this time either. They added a bedroom with walls downstairs, a tiny bathroom up, and replaced the root cellar with a full basement. But they tried to build the same house, working from sketches Rankin drew from memory, right down to a little Dutch door they had to make from scratch.

One of the tricks Norris used to design the small space was bringing in furniture before building walls. The result is custom-built bedrooms: one twin fits there, the other there, he tells me.

He broke with tradition for the wiring, though, putting that underground where wind and weather can’t result in flying sparks.

Building what he calls “smaller, smarter houses” appeals to Norris. Either of these two houses would fit in a master bathroom he once built for another client, he says. No matter how many energy efficient things you put in a house that big, it’s going to use a lot of resources. A small house, he says, “that’s my idea of building green.”