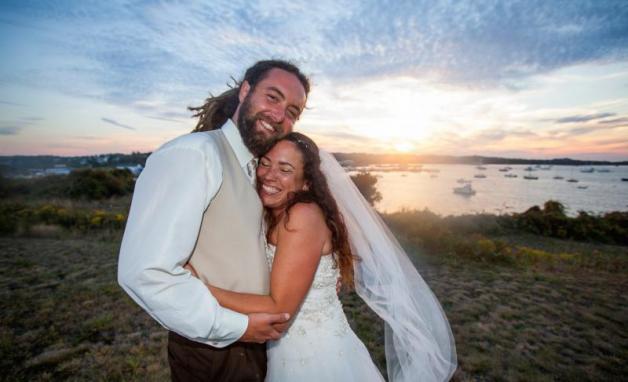 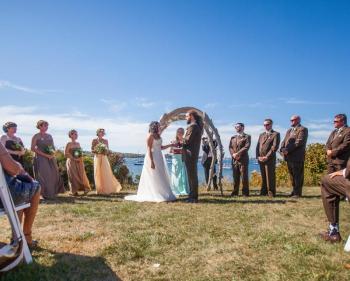 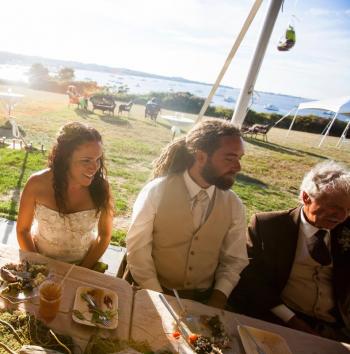 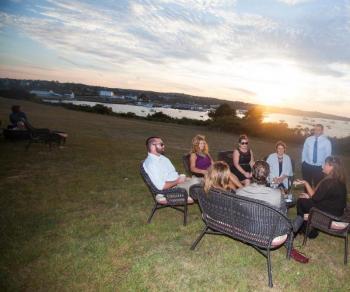 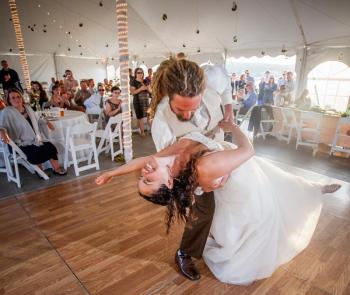 “Every aspect of our wedding was done by someone we knew, every aspect,” marvels Felicia Cinquegrana, 38, a jewelry designer who lives on Block Island year round. “It reminds me of the old days when a townsperson would get married and the town would come together and bring their skills and goods to create a special day. This community full of amazing people came together to help us throw the wedding of our dreams,  a wedding we could never have had anywhere else. Everybody here has a special skill, craft, or connection, and they all so generously donated their time and talents to make our wedding a dream.”

Felicia married woodworker and boatbuilder John Puckett, 29, on September 28 at the Sullivan House with food catered by their friends at Poor People’s Pub. Their story is Block Island all the way: They met at Captain Nicks in the summer of 2010 and John proposed last summer at  Winfield’s restaurant. “It was the night before my birthday,” says Felicia.  “He got down on one knee at the table and asked.  The whole restaurant cheered. He said he wanted to make a big spectacle out of it which, if you know him, really isn’t his style.  I loved it.”

To make their at-home wedding feel more like a destination wedding they rented a separate house for the bride and bridesmaids. “The night before the wedding all the boys went and slept at John’s and my house, leaving the girls to create flower arrangements, get mani-pedis, and have a wedding eve surrounded by women. In the morning we were all able to get ready at the house together.  It also allowed John and I to uphold the tradition of not seeing each other before the wedding,” says Felicia.

Meanwhile other friends were busy decorating the tent at the Sullivan House and preparing the food. “The food from Poor People’s Pub was outstanding,” says Felicia, “ We had passed hot apps, and a  smoked fish and cheese table during cocktail hour. Dinner was a traditional Italian antipasto, jerk chicken, pepper crusted sirloin, mashed potatoes, veggies, and pesto pasta primavera.  All of it was delicious!”

1. Use local vendors and artisans to create your perfect day —there are many amazing resources on the island.

2.  Consider an early welcome event. We had a clam bake on the beach for our rehearsal dinner.  We held it two nights before the wedding, as to not put ourselves in a bad position the day of. It was beautiful, we cooked lobsters and clams in the ground, we had a huge beachfire, and lit floating lanterns.  Everybody from both sides got to meet and know each other in a relaxed, true Block Island setting.

3. Give yourselves enough time for taking photos. I wish I had gotten myself and the bridesmaids dressed earlier, so that we could have had more time to take pictures before the ceremony.

Everybody is still talking about…

… how much they danced. And how it was a great exclamation point to our busy summer.