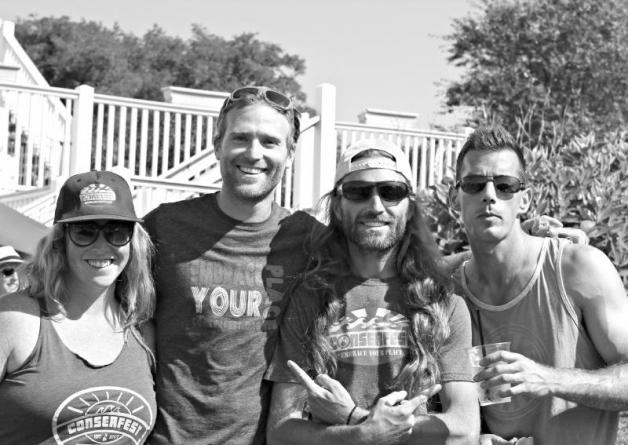 If you're looking for something fun to do that also supports the Block Island environment, then ConserFest is for you. It's two days of music all across the island and all the proceeds go to nature conservation efforts.

The idea of ConserFest came about in 2007. Board of Directors President Cameron Greenlee says he wanted to get a younger generation involved in land conservation on Block Island. He describes the island as a beacon for what conservation can do on both a large and small scale, but says that more can always be done.

Justin Lewis, also involved in conservation, was interested in the project as well. He spoke with his father, David Lewis, a founding member of the Land Trust. "He said 'Don't do anything unless you set your mind to it'," said Greenlee. "That was the best advice."

With that in mind, ConserFest went from an idea to a reality. The first ConserFest was held in 2008 and the event has grown exponentially since then. Every year it's bigger and gets more attention. "You know the effect when non-Block Islanders are reaching out and are interested," said Greenlee.

Since its inception, the money from ConserFest has gone to the Block Island Conservancy (BIC). In fact, the organization sponsored the project up until this year. Greenlee credits BIC as the inspiration behind ConserFest. The money raised from the event has gone to efforts to resist the Champlin's Marina expansion, the Adrian Mitchell campaign, and the Solvikan property. In 2013, they won the Bayberry Wreath Award for their work.

"BIC has been our reason to exist," said Greenlee.

This year will be a little different because ConserFest has become its own non-profit organization. They will still be working with and supporting some BIC projects, but they will also explore other avenues and interests. Greenlee described it as breaking away from mom and dad in order to take the organization one step further. He also noted that BIC had its hands full and that it made more sense to pursue more independent options.

Some causes being discussed by the ConserFest Board of Directors are on Block Island, such as the Mary D Fund, the Committee for the Great Salt Pond's efforts, and the Nature Conservancy. However, they're also looking at some broader causes like the Rhode Island Audubon's "Save the Bay" project that would affect Block Island as well.

This year brings some other exciting new things to ConserFest. Between 20 and 30 bands will be playing. Most are new to the event, though there are a few that have played there before. While the organizers say they don't usually repeat acts, these have been good enough to merit a second listen.

Of course, it's always important to get new bands in as well. Perhaps most exciting is Kiwi, a new reggae headliner out of the New York/New Jersey area. Other acts include Virginia Dare, Jeff Cowles, the Young Guns, the Kelly Walsh Band, Homeslice (returning after many years away), Pressure Cooker, Chachi and the International Players, and Block Island School students under the direction of "the great Megan Hennessy." About 90 percent of the musicians donate their time. Their food, accommodations, and travel expenses are donated.

"It's great to hear feedback from the musicians about the community," Greenlee said. He recounted a story of visiting one group of musicians and finding them sitting with their host in his orchard eating freshly picked fruit. "They thought that was great," he said.

Greenlee added that it was "an amazing amount of accommodations that needed to be found for the musicians" but finding them and organizing all the musicians always proves interesting.

Also this year the event has partnered with Revival Brewing Company out of Providence, RI. Sean Larkin, the company's master brewer, has created "Night Swim'ah," a beer specifically for ConserFest. It will be sold both on Block Island and on the mainland as well as during the event itself, and a portion of the proceeds will be donated to conservation. "We've had a three year partnership with them," said Vice President Tracy Finn. She also noted that this year's ConserFest logo was part of a collaboration between the two organizations.

Other money comes from merchandise, suggested donations, CDs, and art auctions. "Someone can go and buy a twenty dollar t-shirt and know that they're making a direct impact on the environment," said Greenlee.

Organizers hope to get ConserFest off on the right foot with its new non-profit status. Greenlee said he was looking to take on just the right amount in order to maintain the event at the current level and add to it. He said that since they already have a solid foundation, it should be easy to move forward and sustain the momentum.

Already this year, the ConserFest Kickstarter campaign met and exceeded its $5,000 goal, raising $7,000 instead. Local artists had donated work as incentives in the campaign. The money will be used to cover the setup costs and any extra will be put towards conservation donations raised over the course of the event.

Before ConserFest there will be a volunteer beach cleanup with Clean Ocean Access, a Newport-based company. They will also be cleaning up for Race Week and again after ConserFest ends. This helps to keep the spirit of the event going for as long as possible.

ConserFest begins on Saturday, August 1 with the pre-party at the Old Island Pub at 8 p.m. At 10 a.m. on Sunday morning, bands will play at the Town Beach pavilion. That evening at
4 p.m., the event moves to a dual venue at Captain Nick's and the Poor People's Pub, and at 9:30 p.m. music will be held at the Yellow Kittens.