Developing Block Island since 1970: Behind the lens with Malcolm Greenaway 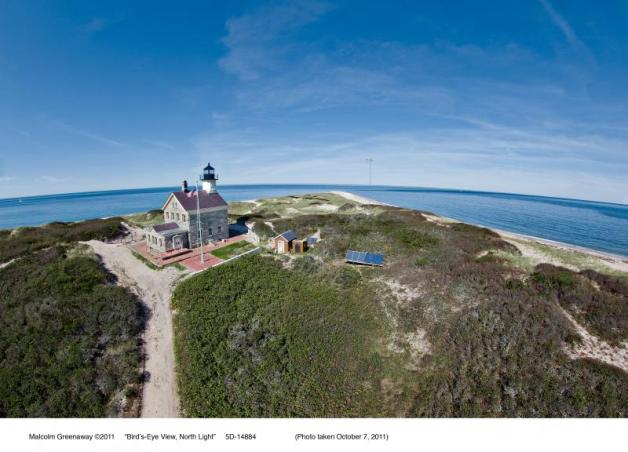 Malcolm Greenaway laughs in disbelief as he shows me a recent printout from the internet he is posting to the door, which lists Greenaway Gallery as the leading attraction of Block Island, surpassing the Mohegan Bluffs. “Who knows who writes these things,” he chuckles.    Whether ranking Malcolm’s gallery above the natural landmarks that his most cherished photography captures is ludicrous or not, Greenaway Gallery is an undeniable attraction for window shoppers and art collectors alike. Read on to hear the stories behind the making of Block Island’s most iconic images. After a short chat with Malcolm, it became very apparent that his trade is not simply a matter of being in the right place at the right time. There is a precise calculation, and certainly risk involved, but some elements are always left up to fate.

1. Bird’s eye View, North Light: This photo came about due to the recently completed restoration of North Light. Never before has such an angle been possible, but when the restoration was complete, and before the lift retreated down the beach, Malcolm was raised into the sky on three separate occasions. Malcolm describes this as a “perfect” opportunity because in typical shots of the lighthouse, you only see the building, but the relationship between a lighthouse and the water is so essential. There are currently two shots from this view on display in the gallery, although
they were captured on different days. If you’d like to go check them out for yourself, you can tell the difference because the first day there is no flag flying, but the second day Malcolm remembered the flag that he keeps in his car for such occasions, so even though it’s a little undersized, it serves its purpose to complete the scene.

2. Old Harbor from the red Jetty: People are often confused by this one and ask where it was taken from (a boat maybe?), because there’s no vis- ible path made on the jetty. What you can’t see is that the low tide allowed Malcolm to walk on the sand along the inner edge of the jetty, until he got to the very end, when he climbed up to take this shot facing town. The risky part was climbing onto the jetty from the very end because the snow was so heavy that he couldn’t tell where the spaces between the rocks were. Malcolm explained to me that in this circumstance, and others like it, his fears revolve more around breaking his precious equipment than any other injuries that could ensue.

3. Setting Sun, North Light: “This is not a fake,” reads the disclaimer posted under this piece in Malcolm’s gallery. He said he had no choice but to post a sign because no one would buy it, immediately jumping to the conclusion that this sunset image was a product of Photoshop. Malcolm was jogging one night when he realized the atmosphere had struck a perfect balance between being too hazy, so that the sunset is lost behind the clouds, and having no haze, so that the sun’s rays bleed through the sky. He rushed home, grabbed his camera, and sped down the Neck to capture this image from Settlers Rock. When he arrived there were 20 or so people gawking in amazement at the sight. His only regret is that he failed to get their names and addresses so they could serve as eyewitnesses.

4. Winter at the Surf Hotel: Here is the Surf Hotel “as you’ve never seen it before.” At first glance, there’s nothing unusual about this image, it’s just the Surf, right? Not until you walk to the corner of Water Street and try to recreate this photo, will you realize that there’s something in the way, the National Hotel. Malcolm stitched together four different pictures to achieve this fluidity. He walked up and down the porch of the National, using a wide-angle lens, since it’s impossible to get the entire building in one shot. Look closely at the seams in the road, and the inconsistent angles of the columns to uncover this optical illusion.

5. Barlow’s Point in White: This image of Bit ‘o Heaven was taken from Barlow’s Point. However, Malcolm had to reach this point from Bit ‘o Heaven. The trick was to avoid making footprints, which would disturb the serene snow scene. Malcolm has shot this view before but he knew that his usual route wouldn’t work. Instead he battled brush and thorns to not leave a trace. The arrival of snow is a rare occasion on B.I., and Malcolm takes full advantage of every blanketing. However, the biggest issue he faces in snow is that although the town workers have cleared the main roads early, many of the driveways are unplowed, since people are not living down them. Therefore, to capture many shots in snow, Malcolm parks wherever he can and walks for miles, to avoid losing his car.