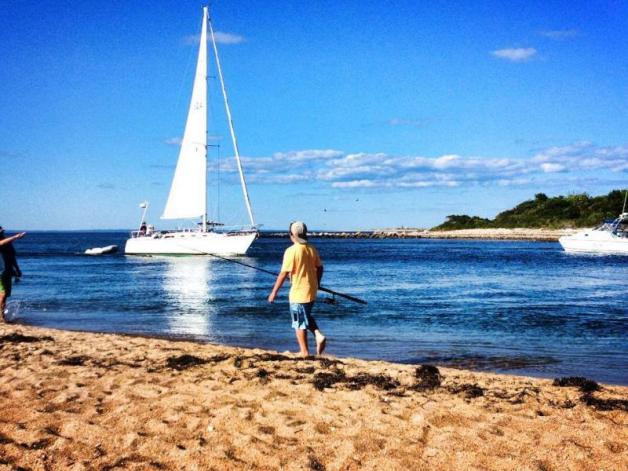 Curious about fishing on Block Island in the fall? Well don’t worry — it only gets better! As the beach crowd thins out, the fishing crowd shows up. Block Island is legendary for its fall fishing. Most fishing books that mention the island always talk about the “fall run” which is the migratory run of striped bass down south. September is all about catching the tail end of the warm summer waters, and transitioning to fall fishing which lasts well into November (sometimes December!!).
Striper fishing will start to pick back up from its late summer lull in the second half of September. The cooler nights help bring the surface temperature of the water down enough to bring the bigger fish in closer. If you prefer bait fishing, a great thing to do is head earlier in the night to one of the docks and catch some squid and then use that as bait. Mostly what you’ll find is that striper fishermen will use lures. Needlefish are the most famous lure on the island, but there are many options that work. This year we saw huge bluefish show up late in August on the west and south sides of the island and I expect they will also stick around for the fall,
One of the biggest attractions for early fall is the tuna. Last year when the bonito and albies (false albacore) showed up in late August, they stuck around through all of September. For those of you that don’t know, bonito and albies are both part of the tuna family and because of that, are known for their incredibly hard fight. These fish are typically spotted at the Coast Guard channel, and will blitz the shore periodically throughout the day(first light is great as well).To catch one, you have to use fairly light tackle and cast thin, shiny metal lures such as Deadly Dicks and retrieve them quickly. If you’re lucky enough to get one, just know that most people enjoy the taste of the bonito over the albie much more. The easiest way to tell the difference between the two is that on the albies they’ll have five spots on the side, and the bonito will have either horizontal or vertical hash marks.
Bottom fishing is still very good in September as well. One thing to note is that as of September 1, the limit for black seabass jumps from three per person to seven per person per day (15 inches). The seabass are mostly caught by boat, but fluke and scup fishing can be done from shore at either the Coast Guard channel or Charleston beach.
Many say that the fall is the most beautiful time on the island, and I would agree. Fishing out here can be such a blast this time of year. Hope you can get out there and enjoy it!