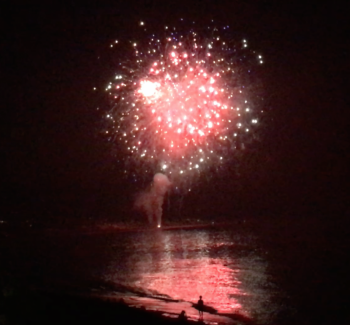 The fireworks finale explodes over the water off of the Town Beach on Monday, July 2. Photos by Cassius Shuman 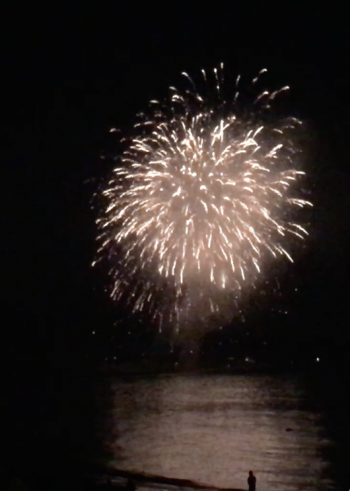 There were chants of “USA, USA, USA,” from the porch at The Surf Hotel, where a crowd assembled on Monday night (July 2, 2018) to watch Block Island’s fireworks display. The fireworks exploded in the night’s sky over the ocean off of the Town Beach, with bursts of red, white and blue, causing a shimmering reflective effect on the water’s surface.

The fireworks lasted about 25 minutes, and were launched into the night sky from a perch a few hundred yards south of the Fred Benson Beach Pavilion. The finale didn’t disappoint, lasting approximately 45 seconds, and ending with 120 Brocade Crowns, which looked like gold dust that was sprinkled down from the heavens. The golden shots faded slowly before another burst of gold lit up the night’s sky.

For the second year in a row, Block Island’s fireworks display was performed by the Jaffrey, New Hampshire-based Atlas Pyrotechnics. According to the company, the finale consisted of 360 three-inch shots, and included the gold dust effect provided by the Brocade Crown shots. Atlas Pyrotechnics has performed fireworks displays at such notable venues as Fenway Park, Gillette Stadium, and the Independence Day Celebration in Washington, D.C. (They were scheduled to perform fireworks in East Providence on July 3.)

The crew from Atlas Pyrotechnics arrived at the Beach Pavilion around 3 p.m. with a truck full of equipment, and about a dozen boxes of fireworks. A tractor transported the company’s trailer and equipment onto the beach from the parking lot, where it was assembled, and prepared for the night’s festivities. The show began around 9:15 p.m. and ended with the finale exploding over the water at about 9:40 p.m. After the last burst of color faded from the sky, applause on the porch at The Surf Hotel gave way to chants of, “USA, USA, USA!”

Video by Cassius Shuman. This video content is property of The Block Island Times.