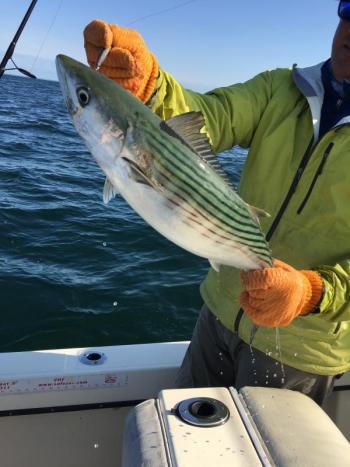 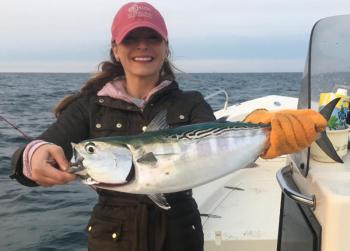 Come August, the Block Island inshore waters are graced by the presence of off shore visitors in the form of little tuna, the Atlantic bonito and the false albacore. The false albacore is also known as ‘little tunny’, and ‘albies’, is the most populous tuna in the Atlantic. They are considered a highly migratory species and can grow to an astonishing 36 pounds and 48 inches but are typically found in these waters under 15 pounds. They are not very good to eat but a tremendous amount of fun to catch and are a target species for light tackle and flyfishing enthusiast alike. A cousin of the albie, the bonito, is also a migratory species and is often mistaken for an albie. Both fish has similar shapes and behaviors but distinctive coloring. Bonito also have teeth, false albacore do not. The Atlantic bonito tastes great and eats well and can be enjoyed sashimi style or grilled. Bonito can get as big as 25 pounds and 40 inches but typically fall in the 5 to 10 pound range in New England.
Bonito usually make their presence known around the island in mid-July and are first caught by someone fishing by boat. They become accessible to shore-based anglers towards the end of July. False albacore arrive later in the summer, towards the end of August, and run late into October. Both these fish can be targeted by beach anglers at the Coast Guard Channel and Sandy Point.  They feed on sand eels, squid, and spearing/silversides making the island an ideal place for them. Lure selection for these speed-demon fish is not elaborate. They readily take shiny metal ‘tins’ or epoxy lures, as well as thin short soft-plastic lures like Sluggos, Hurleys, and RonZ. However, when flyfishing, fly selection can often be critical. Bonito tend to be less selective than albies, but they can still be a challenge. Sandeel and small squid patterns often are the key to success, provided it’s the right size and color.
Whether fishing from a boat or from shore, it takes a large degree of patience and determination to catch these fish. They can make grown adults weep with frustration as an acre of feeding fish refuse to take what is on the end of their lines. This challenge only makes the reward that much better. For the latest fishing report and advice, do not hesitate to stop in Block Island Fishworks on Ocean Ave.
Catch ‘em up!