Frozen Mudslides at The Oar 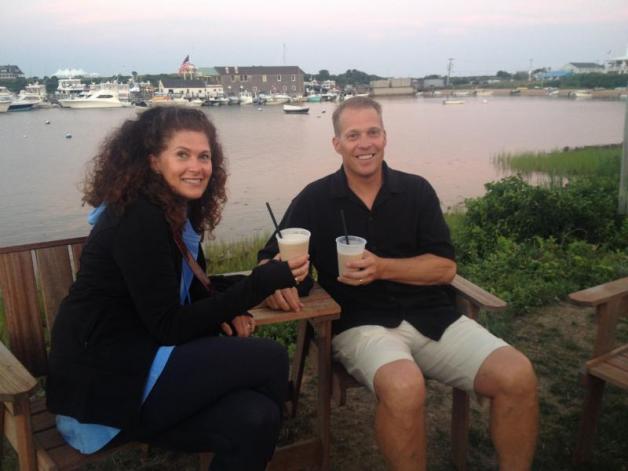 Some things are just non-negotiable. That’s the way it is with joining our friends from Indiana (Missy and Bill, in photo at top) for mudslides at The Oar. They come to the island for a week every July-into-August and one of the first things we do is plan what night we’ll have dinner at The Oar, which inevitably begins with games of cornhole toss on the lawn while sipping mudslides and watching the sunset melt over New Harbor. Sometimes we conduct taste tests between the two varieties offered: top shelf, made in the blender or those from the mudslide machine, which are lower shelf but taste like ice cream. It’s tough to decide, which is why we will need to keep testing.

You won’t get the view but you can try to make frozen mudslides a la The Oar restaurant at home. To mimic the top shelf variety (below, right), put equal parts Vesica vodka, Bailey’s Irish Cream, and Kahlua in a blender, add ice and blend. Swirl some Hershey’s chocolate syrup around in your glass before pouring in the frozen concoction. Add some whipped cream and top that with a chocolate-syrup drizzle.To make a home-version of The Oar’s machine-made variety (below, left), blend equal parts of the lower-cost (known as “well”) varieties of vodka, Irish cream, and coffee liquor with enough ice cream to make it smooth and creamy.