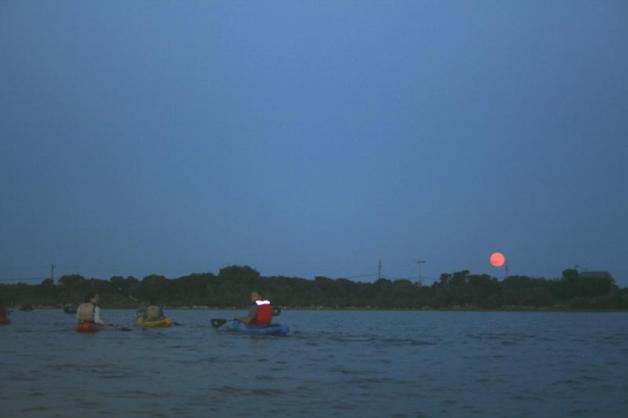 Above: Having watched the sunset from the mooring beds in the Great Salt Pond (below), the group headed up Trims Pond to watch the super moon rise from Harbor Pond. Bottom: The group readies for paddle-off; Pond and Beyond owner Corrie Heinz stops to talk with the group about the ecology of the Great Salt Pond and to point out interesting plants and animals. All photos by Brooke Hammarskjold 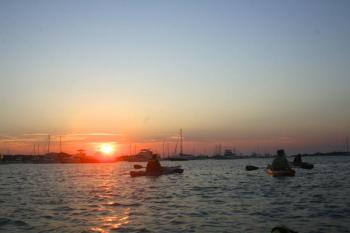 On July 12th, as many admired the super moon (a full moon that appears even larger than usual because of its closeness to the earth) from their houses, I was lucky enough to be out on the Great Salt Pond, part of a group of kayakers on a tour led by Corrie Heinz, owner of Pond and Beyond Kayak Tours.

Heinz started Pond and Beyond seven years ago and now, in the summers, she leads up to three kayak tours a day mostly to tourists and people renting houses on the island. She began the full moon kayak adventures several years ago after seeing them advertised elsewhere. At first, she says she thought they might be scary and somewhat dangerous, but was surprised at the serenity and beauty of kayaking at dusk.

“It’s a completely different experience at night, I think it’s very different than what anyone has done before,” she told me.

Tonight there are seven of us, including Heinz, a mix of island residents and tourists each paddling his or her own kayak. We leave the Pond and Beyond “office” behind Smuggler’s Cove around 7 p.m. while the sun is still out and the harsher winds that crossed the pond earlier that day have settled down.

We first head toward the former Weather Station, past Rat Island, the tiny piece of land right off the pond’s shore, and under the bridge that crosses Ocean Ave. A little further south, Heinz stops the group to discuss westerly winds and island ecology, while admiring the egrets that stand among the dunes on the edge of the pond.

As the first signs of sunset appear, we turn our kayaks around and head back toward the harbor, stopping among the boats moored near the Oar restaurant. On these full moon tours, Heinz says she often brings the group further into the pond to watch the sunset, but a somewhat heavy breeze tonight keeps us on the eastern, more protected, side of the pond. No matter, as we spend about 20 minutes watching a spectacular sunset that paints the clear night bright pink and orange, while Heinz talks about the history of the pond and development of the channel and harbor from when both Native Americans and colonists occupied the island. Afterward, Lauren Christiana, who was visiting her aunt on the island, told me she really enjoyed “all the fun facts (Heinz) gave along the way.”

As the sunset colors begin to fade, Heinz leads us up Trims Pond, where we soon spot the massive, bright super moon peeking over the island’s eastern beaches. As the moon rises, we pass under the bridge near the intersection of Corn Neck Road and Beach Avenue and make our way into Harbor Pond. This part of the tour was a favorite of several members of the group. “Watching the moon rise, especially as we went under the bridge, it was spectacular,” said island resident Gail Ballard Hall (Lauren’s aunt).

After chatting for a bit and admiring the moon some more, our group begins paddling back to Pond and Beyond. As it becomes darker, Heinz points out small fluorescent moon jellyfish glowing in the dark. They are somewhat hard to see under the shadow of the bridge, so Heinz shows us how to wave our paddles in the water to make the jellyfish come up to the surface. This spectacle turns out to be a highlight for several members of our group. “I think my favorite part was watching the phospholipid jellyfish under the rising moon,” said Emily Lindon of Washington D.C.

By the time we return to shore, it is already 9:15 pm and has quickly become dark. Although many of us are becoming cold, we are still marveling over the beauty of the night and don’t want to leave. “It’s just nice to get a different perspective, I loved the views, the nature and the relaxation,” said Emily’s daughter, Heidi Knoll.