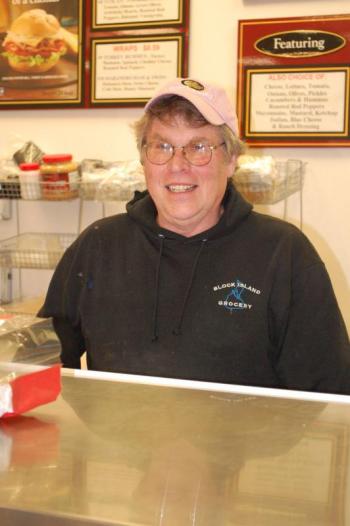 Gary Ryan behind the deli counter at the Block Island Grocery. Photo by Kari Curtis

Gary Ryan became a town councilor this past December and he’s been a member of the Rescue Squad out here for 25 years. But most of us know Gary best as the knowledgeable butcher and friendly face behind the deli counter at the Block Island Grocery store.

We caught up with him recently at the BIG after he’d just spent his lunch hour on a rescue run, flying someone off island. He was in good spirits as, after a close call, it appeared the person would pull through just fine. Clearly it’s pretty unusual for Ryan to have a bona fide day off. In fact he says it’s total dream world. But if he ever did, it might look something like this.

Yesterday’s news
He’d begin by sitting down in his living room with a cup of coffee, his first of three or four, and reading yesterday’s New York Times. Why the paper from the day before? “Because I never get around to reading it,” he says. Ryan says he’s a die-hard print guy. “I can’t do the tablet thing. I have a stack of books on the bedstand a mile high.”

As it’s an ideal day, next up for Ryan is a walk on the beach with his dog Lucy, a 13-year-old golden retriever. Ryan likes walking the beach picking up driftwood and other found objects. He used to go to the dump to troll for hidden treasure. “Of course I can’t call it the dump anymore, Sean will tell me it’s the Transfer Station.” (That would be Sean McGarry, an owner of the, ahem, Transfer Station.) He recalls the section they used to have at the dump for rummaging and how the late Herb Fisher once found him a set of Congressional Records from the 1800s there. The books are now proudly displayed on Ryan’s bookshelves. “I found the expenditure for the building of the Southeast Lighthouse in one,” he says.

These days Ryan drives past the dump and heads for West Beach, his favorite spot for finding the driftwood that he and his son Erik will make into tables. Erik’s a wedding design planner (he’s the Ryan of Ryan Designs…) and he uses the tables for his functions. Gary likes walking the stretch of sand from West Beach to the lighthouse as it’s lesstraveled and makes for better finds. Two of his favorite found objects are an intact turtle shell and a pair of large teeth. He says the teeth are molars, an inch wide but not sharp like shark’s teeth would be. He even gave them to an archaeologist once to inspect at his university lab; he brought them back with a less-than-satisfying answer — he had no idea what they were.

Lucy is getting older so Ryan’s walks are sometimes cut a bit short. The other day he says he realized she wasn’t following along and he turned around to see she’d sat down. So he went back and just sat down next to her for awhile. Then the two went home.

Honey-do list
Back from their walk on this dreamworld ideal day, Ryan says he’d next knock off a few of wife Bonnie’s projects. Screens, gardening, fixing lights perhaps. And he’d start thinking about what to make for dinner. Often that turns out to be salmon. “It’s my favorite because you can cook it a hundred ways. Last night I had it in olive oil with some roasted garlic from the night before. I dredged it in some seasoned flour and let it get crispy on each side, then added a garlic onion marmalade in time for it to melt on top.”

Dinner-planning reminds him he hasn’t had lunch. It’s an ideal day so Bonnie’s free too and the two head to Dead Eye’s to dine on the back porch overlooking New Harbor. “I like that because you can’t see the road you’re out of town away from everything looking at the harbor.” He’ll probably order fish, maybe even the fish and chips.

Back home he’d “put a dent in that pile” of books on the bedside table, he says. Right now he’s reading three: “Flags of our Fathers” by James Bradley about the flag raisers at Iwo Jima; “Embers of War” by Fredrik Logevall about the U.S. involvement in Indochina, which won a Pulitzer; and “Pursuit: The Chase, Capture, Persecution, and Surprising Release of Confederate President Jefferson Davis” by Clint Johnson. He says he’s been enjoying this last one and is grateful to Cindy Lasser at Island Bound for recommending it to him.

Pucks and puckers
However, if it’s really an ideal day, he considers: “Hockey season would still be going, the Islanders would be on, and they’d win. I might as well dream big!” Now it’s dinnertime so out comes the salmon, maybe with some spinach which he’d cream with “mascarpone, bits of bacon, and a touch of nutmeg.” He’d serve that with some type of rice or one of his “all-time favorites,” mashed potatoes, to which he’d add mascarpone, sour cream, and sautéed onions. You don’t have to be standing at the deli counter to get hungry talking to Gary! Then of course there’s the requisite glass of red wine. Even with fish, Ryan says he likes a glass of “really dry Italian red, the kind that almost makes your lips pucker.”

Continuing to dream big, Gary says next he and Bonnie would find a movie they are each equally excited to watch. Or there would be another hockey game on! Or he might decide to sit at the bar at Eli’s. “It’s always fun there with Rosemary and Emily, it’s comfortable and nice because you know everybody. Of course, there are times I try to get away from that,” he admits.

Where does he go when he doesn’t want everyone to know his name? He and Bonnie head off island to the Matunuck Oyster Bar or Turtle Soup in Narragansett opposite the Tower. “Oh and we recently discovered the Sea Goose in Westerly,” he says. “We really like that place.” No matter what, an ideal day would end the same way: Curling up in bed with a good book, of course.