Inside the Tower at the Southeast Lighthouse 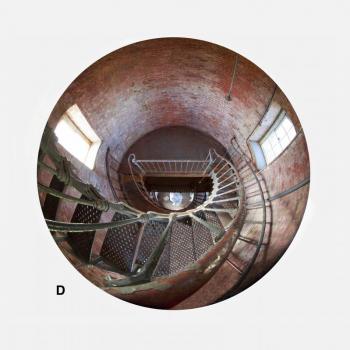 Above: Figure D shows the final, perfected image. Below, Getting there: In Figure A, a 180-degree view inside the Spring Street Gallery taken with a fisheye lens shows how the resulting circular image distorts the rectangular room; In Figure B, using the fisheye lens to capture a circular room — in this case looking up into the tower at the Southeast Lighthouse — works well; In Figure C, capturing the tower from above, however, also captures the photographer’s legs.

Photographing in tight spaces can be difficult — the photographer is unable to move far enough back to include all he or she wants in the picture.

Consider example A, a picture I took of the Spring Street Gallery: This one shot includes the entrance directly to my left, the adjacent room directly to my right, the ceiling directly above my head, the floor directly below at my feet, as well as the portion of the gallery in front of me. Unfortunately, the fisheye lens produces a circular image. Moreover, mapping a rectangular shape (the room) onto a circular field (the fisheye image space) can produce jarring distortion and incongruities as is evident in this image.

But what if the object one is photographing is itself circular? Since the object is circular and the result is circular, the two might make a pretty good fit. With that in mind, I decided to take pictures of the inside of the Southeast Light tower (a circular structure) using the fisheye lens (which generates a circular image).

I began by taking a picture of the Southeast Light tower from below looking up. (See figure B.) Not too bad— it seemed to work. The circular tower and the circular image seemed to make a good fit.

Building on my success, I proceeded up the stairs, almost to the top, to take a picture of the tower looking down. (See figure C.) Once again, there was a good fit between the circular tower and the circular fisheye image. However, a new problem arose: Since the camera is at eye level, and since pointing the fisheye lens down then captures everything below the lens, the resulting image included my shorts, my legs and my shoes.

What to do? The ideal solution would have been to get my shorts, legs and feet behind the lens. But that would have required me to suspend myself upside down with a rope, one end tied to the platform above and the other end tied around my ankles. That was not about to happen.