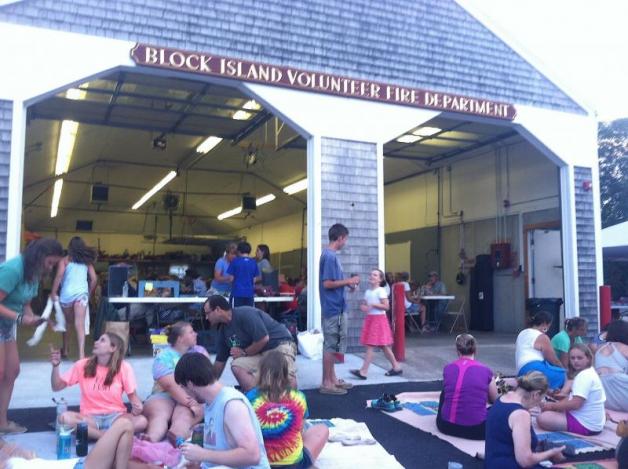 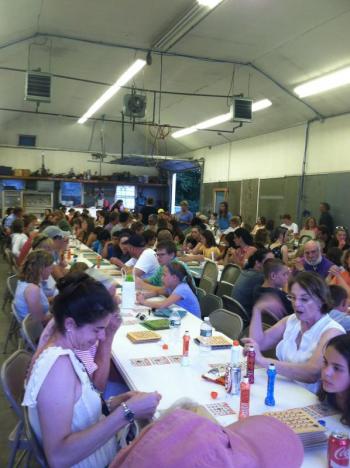 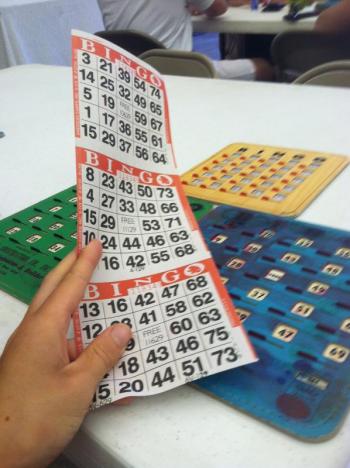 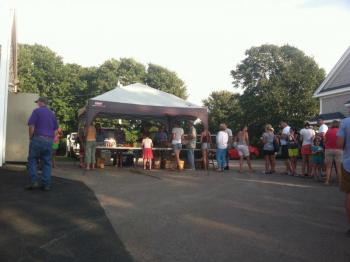 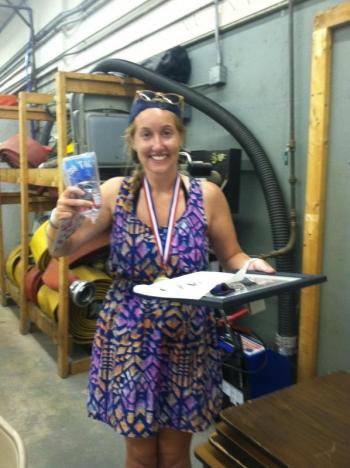 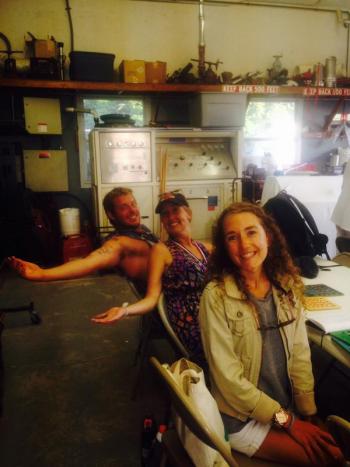 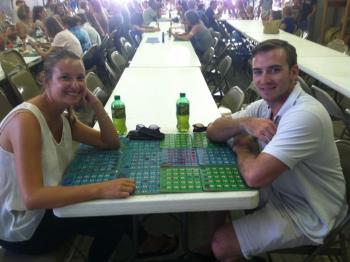 The sign normally goes up on Friday, but the anticipation for the Tuesday night Bingo held at the Fire Barn has been building for much longer. The event is held four times throughout the summer with the remaining two nights on August 4 and August 18. The line to buy boards begins at 6:30 p.m., with Bingo calling starting shortly after 7 p.m. Get there early, the line for cards is often long and grabbing a good spot is apart of making a good evening great. After a busy day of island activities, sitting back in the sunset with the chance of real winnings make many return year after year.

The event is held by the Ladies Auxiliary of the Volunteer Fire Department to raise money for the Block Island Volunteer Fire Department. It is $5 per person to play, receiving three boards each, but buy as many cards as you would like (just make sure you can handle them all). The night includes “normal rounds” which the purchased boards are used for and also “special rounds” where players can buy $1 paper cards to be used for the single “special” round. This is not your typical mainland bingo; the event draws families back year after year to participate in this island tradition. The event has become a meeting place for families, both those visiting for the summer, week or even who live on the island year-round.

Bring your own chairs, or blanket if you would like to sit outside, but the fire barn is filled with tables for plenty of seating. “B” prepared for excitement and eagerness as your card hoovers with four in a row. The joy of winning a card is not limited to the glory you have, the night congratulates winners with great prizes from local businesses, like t-shirts, tumblers, gift cards to local businesses and even a cash payout of $100 during one of the “special rounds”.

Speckled throughout the tables between smiling faces and bingo cards are the sodas and candies we all love. The candy selection is impressive and the soda is kept cold, both are available for $1.

The draw of the evening goes further than just the cards, candy and prizes. The establishment of this island tradition runs deep for many attendees. In speaking with Lisa L., who has spent the last 40 years coming to Bingo, the evening allows her the chance to see friends and spend time with family on beautiful summer evenings. Lisa takes her Bingo seriously and comes prepared with scotch tape for specials rounds, not willing to risk missing a number. The passing on of the tradition is seen with Lisa, as now her niece attends as well.

Another long time Bingo attendee, Tess Duale, enjoys the thrill of the night. This summer she introduced the activity to Brian Rogers. The two have serious strategies for Bingo playing including no nonsense attitudes.

The prizes that are awarded at Bingo are serious swag. Jay and Laurie Hubelnk have won a round-trip flight to Westerly, RI and $25 to Finn’s Restaurant in the past. The couple says “it’s a good time no matter if you win or lose.” As the caller shouts out numbers and your card becomes ever closer to Bingo, nervousness builds and excitement grows. But if someone calls "Bingo" before you, have no fear, join the crowd’s excitement for the winner, clear your board and get ready for the next round. There is no hostility in this crowd.

“It is a real sense of community” says Hope Brigham. Hope won a round and was cheered on by the entire crowd as she claimed her prize. “I was feeling down after losing in the last round, but I just stayed focused and all of the sudden looked down and had Bingo. It was a miracle." This story happens to so many that attend Bingo, that the addictive night brings many back year after year.

Point Judith fisherman Tommy Pono believed it was serendipitous that Bingo was being held on the single night he was on the island. “There is a lot of superstition that goes into Bingo night. Next time I will definitely wear my lucky socks,” says Pono.

From lucky socks, to favorite boards, traditions run deep at Bingo Night. Two nights of Bingo remain in the season. Come join the fun of the night. It is “N” your favor.