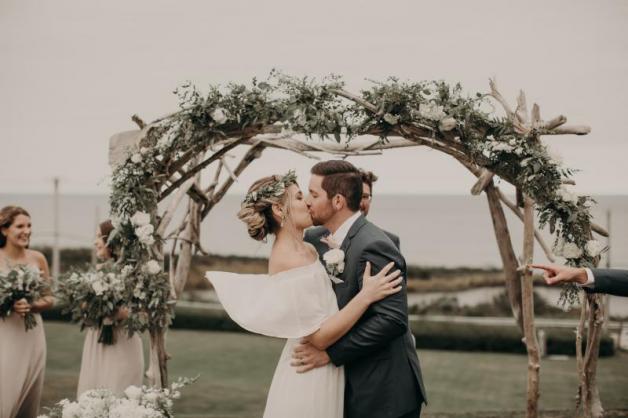 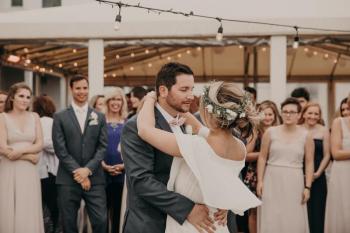 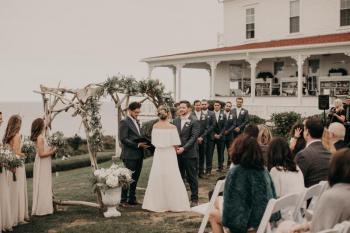 Before the Ring, and Proposal
Jordan and Kevin were both attending UMass Amherst; Kevin was in his junior year and Jordan was a sophomore. About a month into the fall semester of 2011, they bumped into each other at a party, and remember locking eyes from across the room. On a trip to the island in July of 2016, Kevin brought Jordan to the Southeast Light to see if they could spot any sharks, and suddenly Kevin was on his knee proposing. The pair celebrated alone for a little bit before family arrived to hug and celebrate.

Block Island Because......
Jordan’s family’s vacations to Block Island  started 50 years ago when her grandparents would stay at The Surf Hotel. Returning each summer since 2001, Jordan says each trip to the island has become a staple in their lives and such a special time to look forward to. The island has become their second home.

Wedding Day
The “first look” on the breakwall was both beautiful and surreal to Jordan and Kevin, a special moment alone before the ceremony. Jordan and Kevin’s best friend officiated the ceremony, personalizing the occasion and making everyone feel involved. A taco bar was unique, and a huge hit with guests. The vision was to keep it very casual. Dessert was none other than Aldo's donuts which were displayed on a DIY donuts wall. The reception was a full-on dance party on the back ocean view terrace under twinkling lights, and overlooking the ocean.

Wedding Weekend
Jordan and Kevin created a wedding website detailed with information for their guests. Kevin's father and stepmother hosted the rehearsal dinner at The National Hotel, featuring fresh Block Island lobster and swordfish, followed by a welcome bonfire at Ballard's beach, hosted by Jordan’s parents. The ceremony was held on a Friday  on the picturesque front lawn of the Spring House Hotel. Guests were invited to a "hangover" brunch the next morning that took place at The Hotel Manisses in the garden. To round out the weekend, guests were invited to The Oar for margaritas and mudslides to present the wedding oar, which also doubled as their guest book.

Top 3 pieces of advice for having an island wedding:
1. Definitely consider a long engagement! We got engaged in July 2016 and tied the knot in September 2018. Yes, two years. And it was so worth it.
2. Utilize the entire island to make the trip and experience the best it can be for your guests.
3. Make it your own. We threw traditions out the window and tailored each event to our personalities.