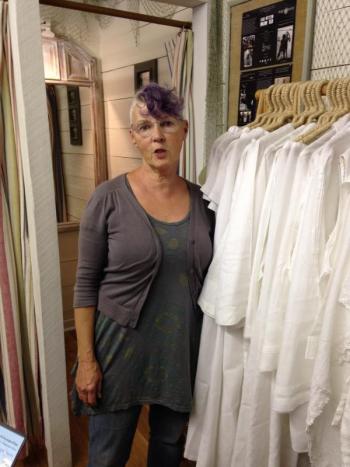 From top: Beachcomber owner Virginia talks about her Haitian clothing line, proceeds from which go to providing clean water in that country, inset is a detail from one of the pieces; one of many budhas to be had a tEast of the River Nile; the jammies Judy found at Full Moon Tide. Photos by Judy Tierney

The Not New Boutique is a signature island rummage sale event. It used to run once or twice a summer, now it is open every Wednesday through the tourist season. For weeks ahead of its opening date, we year-rounders search through our closets for clothing we no longer can use and then drop it into a blue hamper at the side door of St. Andrew’s Rectory, the summer Catholic Church whose members sponsor the sale.

The extra space in our cramped Block Island homes feels so good — but only for a little while. On the day of the sale, everyone treks down to St. Andrews to find something special to take home and voila, our closets fill up yet again.

My friend J who describes almost everything in her life in the superlative mode, calls me afterward every year to tell me what she has found there: a wonderful designer label jacket, a pair of almost-new marvelous Mary Janes. She wears her newfound clothing proudly, as we all do, congratulating ourselves for being such good shoppers. And we maintain a discreet silence when we meet a friend or neighbor dressed in one of our castoffs, inspecting to determine whether they look better than we did when those clothes were ours.

This spring I spent a lot of time on the mainland and sadly, I missed the opening of the Not New Boutique. When I returned the weather had turned warm. As I rummaged through my closet looking for summer tees and shorts, I realized that my collection was shabby and shapeless, worn out from washing and wearing over the 10 years I have lived only on Block Island. A bright red tee shirt was now a faded rose, and when I tried it on, the shoulders were snug and the hem was above my waist. Something had happened to it, and though I hate to admit it, something had also happened to me. It was time for me to buy some new clothes.

Hitting the racks
Like a gambler planning a trip to a casino, I set a limit for myself. I would carry one modest-sized shopping bag, a plastic one with a floral design sold at a major discount clothing store, and I would buy no more than the bag could hold. It was a Friday in early June. Not all the shops were open, but I had noticed as I drove down Dodge Street that the door was propped open at one of my favorites, the Beachcomber. I called my friend R who often brings me to that shop to search for Fresh Produce cottons, and she did not need to be convinced that this would be a good day to shop. I ditched my car and we walked to town together.

Virginia, the owner, greeted us by name — we’d been there many times before. She is a tiny woman with closecropped graying brown hair and one forelock. This year, for flair, she has dyed that lock purple. Now it’s really easy to find her when you need help in her store. Virginia found a pair of navy blue pedal pushers for me. They were just what I was looking for, so into my bag they went. R put a few outfits on hold. She wasn’t sure they would match clothes she already had at home. I suspect, though, she has gone back there by now to buy them.

If you want to help the people of Haiti, look through the rack of white cotton clothing in the rear of the shop made by SIMBI INC, a company that is based and manufactures in Haiti. A portion of their proceeds goes to Aqua Haiti, a nonprofit that installs water filtration systems to combat diseases caused by untreated water, such as cholera.

We took a break after examining everything in the Beachcomber to visit a friend and then I returned to my excursion alone; I’d tired R out.

I headed for Strings N’ Things, another favorite as it is often open in the winter and carries clothing and jewelry styles from the sixties that I am fond of. Christine Bassett was on the sales floor that day. She also is a tiny woman and for a few seconds, I imagined myself as also her size, before a quick try-on brought me back to my senses.

After a few false starts I found the perfect dress cut to fit me, a black tee dress with a few orange and purple string swatches across the waist. Above the hem, a dancing bear, a reminder that this is a Grateful Dead Enterprises dress. I was familiar with the tee shirts and ties that are sold mostly for guys, but a dress? I would have liked it anyway, but when I put it on I was transported back thirty or forty years to a particular concert in Springfield, Mass. when I was a dancing bear. Sold. It went into the shopping bag with the navy pants.

Beyond threads
No shopping trip is complete for me without a stop at Island Bound. Yes, I read on electronic devices, but I find they tire my eyes and I miss turning paper pages, folding down corners, seeing a stack of unread books waiting their turns on my night table. What is a household without a bookcase or two or three?

When we moved to Block Island I had to give away much of my collection, but I did keep my old favorites and one representative book of each mystery author I love. My husband asked why I found it so hard to part with the books he knew I no longer opened. Their pages were yellow, he said. But they are my friends, I replied, even if now they are largely unvisited friends. I compromised with him and gave away many of my beloved books, but I have not stopped buying new ones. I think of it as a tithe, like those of the many people I know on the island who tithe their churches to keep their doors open.

Island Bound’s owner Cindy Lasser was hobbling around her shop on crutches when I stopped in. She had dislocated her kneecap, an injury that sounds so painful I winced as she told me. I chose two books: Elizabeth Warren’s “A Fighting Chance” and Sue Monk Kidd’s “The Invention of Wings.” Cindy told me to wait a second, and she bent down to a carton of books under a display. They were leftovers from World Book Night. I had missed that this year as well as the Boutique.

On World Book Night classics of all kinds are donated and readers are asked to give them away to someone who is not a big reader, but who might enjoy them. (This year the event was sponsored by UPS.) I always grab one book for a nephew who should read but doesn’t often, I leave one in a local bar for anyone who would like it, and I find something for the great nieces in my extended family. I was glad Cindy had some left for me to distribute and took a copy of “Catch 22,” which I will give to Sara, my great niece who is an avid reader but usually prefers stories about vampires, and an Agatha Christie. After I zipped through the Christie, I left it in a condominium clubhouse that is lined with bookshelves where the older residents share their readings.

Nighty night
Four books added to my shopping bag almost filled it, but not quite, so I continued on my quest. As I left Island Bound, my friend J came tripping out of the post office. That is one of the joys of Block Island in the shoulder seasons, meeting up by chance with a friend who isn’t in any kind of a rush and has time to spare. J joined me because I told her I was going to stop in at two of our favorite shops, East of the River Nile and Full Moon Tide.

In the Nile, I was yadda-yadda-yadding with Ron Munschie about Guatemala and about his buddha collection — small big-bellied laughing buddhas, beautiful statuesque buddhas, even a yard sized stone fountain —when J took me by the arm and led me to the shelf with the felt baby slippers from Nepal. I’d forgotten about these tiny lions and bunnies and mice, all of them with ears and eyes, noses and mouths, faces that fit over tiny baby toes. When I first saw them last year, I had no little one in my family, but now I am a new grandma and my little Nora deserves a pair. Together, after great deliberation, J and I chose the white bunnies. They did not take up much room in my shopping bag.

At our final stop next door, Full Moon Tide, I caved to buy the lightest weight cotton pajama I think in existence. It is perfect for those hot steamy nights when there is company in the house and clothing is de rigueur. Ron is already calling it my ice cream suit, though those are pure white and this has teensy blue flowers running through it and splashy periwinkle blossom borders.

With this purchase my bag was full and my feet were tired so I headed home and J headed back to work. I think there is no better place to shop than Block Island, whether it’s the Not New Boutique with recycled clothing or one of the many specialty boutiques with new, trendy offerings. I shall return later in the summer to peruse new stock in other shops.