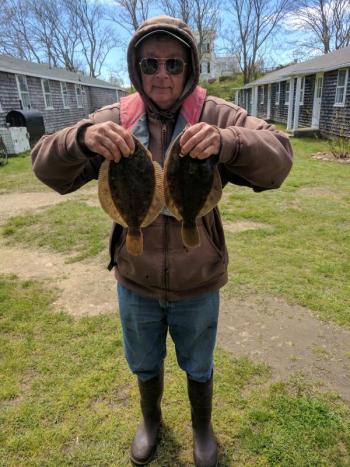 Dust off your fishing gear, folks. Fishing has already begun on Block Island! The month of June is an exciting time for anglers on Block Island. You’ve probably at one time or another seen a hopeful fisherman looking over the bridges or docks for any sign of baitfish in the water. That’s what June is all about. We anxiously anticipate the arrival of bait to our waters, and I’m happy to report they have already started showing up. Last year’s herring run was very strong, and this year has been no different. When the herring show up, you know the bigger fish are right
behind.
It’s no surprise that water temperatures are taking their time rising after the long winter, but they are. People have already started catching fish around the island from both shore and boat, but it’ll really take off once more bait shows up. June is when we see water temps rise and the baitfish population increase. What to look out for mostly are squid and sand eels around the shores. Typically, once the temperatures hit the upper 50s is when we notice the increased fish numbers.
In June, the three main species of fish that are caught around Block Island are striped bass, bluefish, and fluke. You can still catch winter flounder from either the New Harbor docks or Coast Guard channel using clams as bait, but our focus is on the big three. The good news is that there are already positive reports of fish being caught. Historically, the stripers first show up to the island from the southwest side with the bluefish mixed in as the two species often travel together. The herring in the channel everyday on the turning tide has brought in some bass.
Many are trying to catch them on the fly, but smaller shiney swimmer plugs will work as well. If scaling cliffs and lugging all your gear down the stairs at the bluffs sounds like too much work; it’s okay, because there are fish to be caught in easier spots such as the channel. Fluke like sandy bottoms, so sticking to the Coast Guard channel or Charleston beach is the safest bet. Closer to the mainland, they are already catching great fluke. So around Block Island, June is the time to see everything really pick up. Another welcomed fish has been the blackfish (tautog). There have been a few picked up already in Old Harbor on the same setup you would use for the flounder.
As you get your gear ready, you should also make sure your fishing license is up to date and that you are aware of all the regulations. Certain states do have reciprocity with Rhode Island, so if you have a license back home, you might be okay out here as well. Remember, on the striped bass, it is no longer a two fish limit per person per day. It’s 28” and only 1 fish per day.
You can find the rest of the regulations online at the RI DEM website at risaa.org/regs.
I hope you all get a chance to get out there and enjoy fishing in June on Block Island as much as I do. Here’s to a great 2017 fishing season!