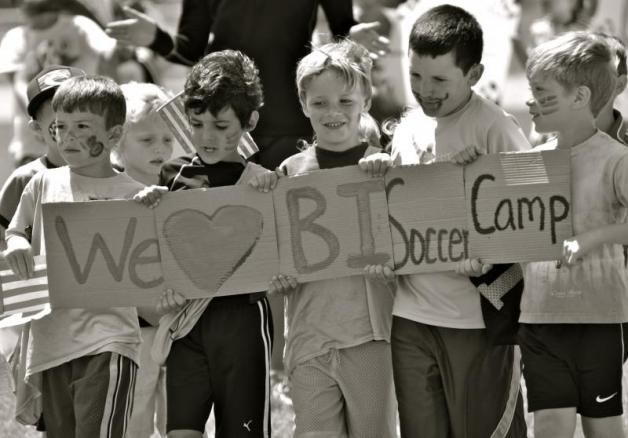 This summer, its 18th on Block Island, Norman Riker’s Soccer and Lacrosse Summer Camps had some 45 boys and girls ages 7 to 14 learning skills, playing games and perfecting technique.

Soccer and lacrosse have been shaping Norman’s life since he was a kid himself, growing up on Block Island. While he excelled more as a lacrosse player, he readily admits his first love was always soccer and he was passionate about the sport from a young age. In high school he was able to play both sports, but at Springfield College in Massachusetts, he had to make a tough choice and ended up playing lacrosse for the college, knowing he wasn’t done with soccer for good.
After graduating, Norman made a smooth transition from player to coach: “I always knew I wanted a career coaching the sports I loved.”

He found his first coaching gig in the spring of 1994 as a volunteer assistant coach with the University of Vermont men’s lacrosse team. He had to figure out a way to support himself though, so came back to the island. Prior to going to UVM, he says, “I spent the summer working and saving money out here. I mowed lawns, drove a taxi using my parents’ taxi license, and at night tended bar at the Yellow Kittens.”

After a year working as an assistant coach at UVM, Norman went to Vassar College in New York, where he became the assistant women’s soccer and men’s lacrosse coach. During his eight years at Vassar, he earned a Master’s degree from SUNY in professional studies with a focus on education. In March 2002, Riker was hired as the women’s soccer coach for Wittenberg University in Springfield, Ohio. Since May 2011, he has continued his extremely successful coaching career as the women’s head coach at Connecticut College in New London.

Through all his jobs and successes, one thing has been constant: summer camp on the island. Norman founded the camp in the summer of 1995, just before the Block Island Recreation Department was created. It was perfect timing: “I got in on the ground floor with the camp,” says Norman. “It was right before the blossoming of the rec department, which has done such great things for kids out here.”

He says he was driven to start the camp because he saw a lack of opportunity for athletically ambitious kids who, like himself, spend their childhoods here.

“Growing up on the island, there were not a lot of opportunities in terms of sports,” he says. “I was lucky enough to play at a boarding school, but as a member of this community I saw the camp as a great way to give back.” And it’s a way to share his two sport passions.

Soccer takes place in the morning between 9 and 12, while the lacrosse clinic runs each afternoon from 4 to 6. Then there’s “Mini-Kickers” a 45-minute soccer fun fest for 4- and 5-year-olds.

Norman starts each day with a “Street Soccer” session, which places kids into a game the moment they arrive. He does this “because it allows the sport to occur naturally, the way it does in countries like Brazil where the games just happen every day on the street. Allowing the kids to play in a game like this in the beginning of each day makes them eager to learn and participate in the fundamental drills that come after. The early games also relieve stress in a lot of the kids. I’ve found that in America the game isn’t happening naturally as it does in other places, so that’s the environment I try to create.”

The kids are then separated into groups that move through various fundamentals-learning stations.

Riker has seen a number of his campers go on to successful careers at the collegiate level. And a number have come back to work as camp staff. The camp allows Norman to develop his own coaching style and philosophy, as well. Lately, he’s incorporating lessons learned while getting his Master’s degree. “What I learned had a lot to do with conflict resolution, group dynamics, and helping people as a coach and an educator. It also allowed me to learn how to deal with conflicts within teams and staffs.”

Most importantly, though, Riker sees B.I. summer camp as a way to give something back to the community he calls home: “Since the beginning, it’s really all been about giving back. I wanted to give these kids the opportunities that weren’t around when I was a kid growing up here.”