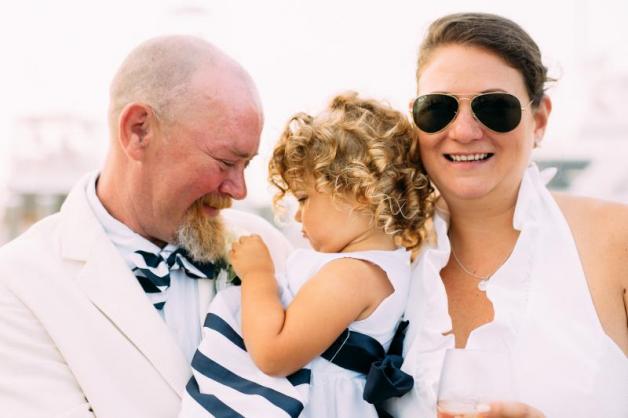 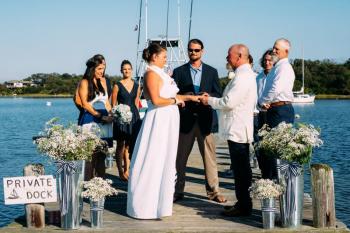 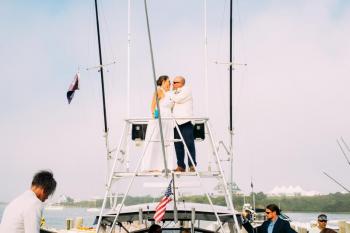 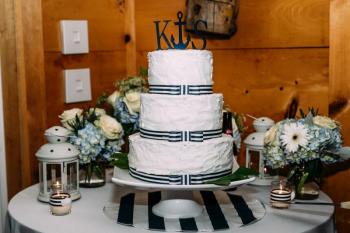 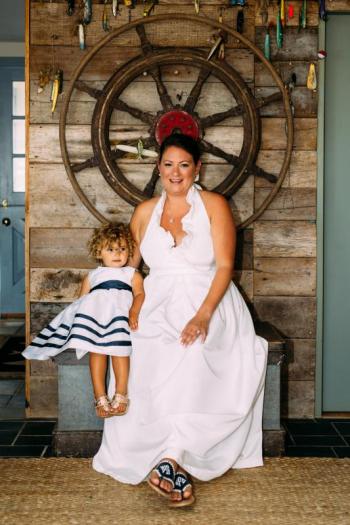 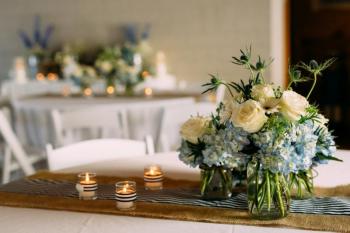 Wedding Planner, day of: Above & Beyond Event Planning

Before the Ring and Proposal
Kelly and Scott met while working on Block Island in 2007, Scott’s first summer on the island. Kelly and Scott had known each other through friends all summer, but started dating after chatting at Captain Nick’s one night at the very end of the summer. They went to Sedona, Arizona for a few days as a “baby-moon” after discovering they were expecting, and on a hike at Red Rock State Park they reached the top of one of the hills to take in the scenery, and Scott got down on one knee and proposed. Kelly never would’ve guessed he had snuck a ring out of the hotel room in his pocket all day — she was really surprised!

The Day and Design
The wedding ceremony took place on the dock at the Case home on Cormorant Cove, where friends and family gathered on the beach to watch. Kelly’s brother Charlie was the officiant and Kelly and Scott’s daughter Tallulah was the flower girl, along with family friend PJ, as the ring bearer. After a canon send off, Kelly and Scott, along with their bridal party and parents, cruised off to their reception at Payne’s Dock atop the tuna tower of Kelly’s father’s boat. As they made their grand entrance, they were welcomed by all of the boaters on the docks as they arrived as husband and wife. The reception included passed appetizers instead of a sit down dinner so that there was more time to mingle and dance — Kelly loved how casual the evening was.  The table runners were made by Scott’s mother, similar to a style Kelly liked on Etsy — burlap with navy and white stripes. Dances with Kelly’s father, Scott’s mother and the couple’s two-year-old daughter were highlights of the night.

The Wedding Weekend
As the festivities kicked off, a cocktail get together was held at Dead Eye Dick’s. The following day, the rehearsal dinner was held at Kelly’s family home, which was catered by Poor People’s Pub. Welcome bags for the guests were handed out at the rehearsal dinner as well. The day after the wedding, friends and family gathered at the Case house for Bloody Marys. Some guests had to leave early due to a storm that was forecast to hit the island, canceling the ferries.

What was the most Block Islandy thing about your wedding?
“Traveling to the reception by boat, driven by my father.”

1.     Be prepared for anything!  We were lucky a storm hit the week after the wedding.
2.     There are so many great vendors available on island, you don’t really need to hire people from off island.
3.     It’s Block Island — keep it casual, things tend to happen on island time, just go with the flow.