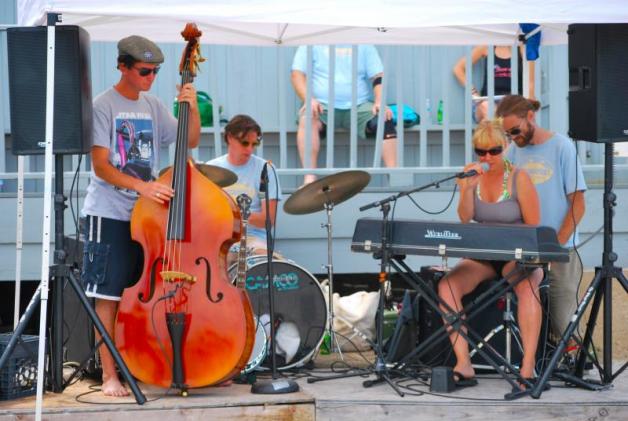 The efforts to preserve Block Island’s natural beauty — with nearly 45 percent of the island’s open space now protected — are the stuff of legend, the legacy of more than four decades of toil.

But would younger generations, those enjoying the fruits of previous efforts, carry on with the cause?

This was precisely the conversation Cameron Greenlee and Justin Lewis had one evening seven years ago with Justin’s father, David Lewis.

“My father said to us, ‘If you two are friends, and your friends care about this place, it’s time to take some ownership of it,’” Justin told the Times a few years ago.

“He mentioned that lots of people in my generation don’t know what’s gone into conservation success here. He encouraged me and others my age to join.”

It was perhaps appropriate and not wholly unexpected that the talk was initiated by a Lewis, for the Lewis family has been instrumental in Block Island conservation since its earliest days. David’s father, Capt. Rob Lewis, mounted the campaign to save Rodman’s Hollow in the early 1970s, which led to the formation of the Block Island Conservancy. Rob’s other son, Keith Lewis, played a crucial role in establishing the island’s Land Trust. (Both David and Keith are previous Bayberry Award recipients.)

That fateful conversation resulted in the creation of ConserFest — an annual gathering of musicians and artists to celebrate the beauty of the island, while also paying tribute to all the conservation work that went into preserving that beauty. The organization also strives to raise awareness about what still needs to be achieved.

This year’s festival will be the sixth and the biggest yet. Starting on August 3rd, dozens of groups will play five island venues (see box at right for more about this year’s festivities).

Play some tunes, pass the hat

The first event came about when Justin and Cameron were joined by Cameron’s brother Travis, Mary MacGill, and Ben Edwards to begin what would become ConserFest with a Homeslice concert and a passing of the hat at a cocktail party at the MacGill residence on Lewis Farm six years ago. “We had not organized ourselves or come up with a name at that moment,” Justin says.

The result was “a modest donation to Block Island Conservancy, but it started the conversation,” says Laura Michel Breunig, another core ConserFest member.

“Since I love music,” Cameron told the Times, “and everyone that’s working with ConserFest loves music, it just seemed like a cool idea to bring sort of a festival idea together to raise money and tell people what we’re trying to do; what the Block Island Conservancy’s trying to do, in particular.”

Travis adds, “We knew that if we could create a way using music to draw in the summer crowds and speak openly about caring for the island, we might have a fighting chance to protect it and assist organizations like Block Island Conservancy in meeting their own goals.”

ConserFest soon evolved into an annual musical event, with musicians and bands donating their time to play at the beach during the day in the summer, and at Yellow Kittens, and now other bars, in the evenings and at night.

Art is also part of the equation.

Laura Michel Breunig and her husband John have coordinated the silent art auctions.

“It has become a way for the younger generation of Block Island to step up and get involved... ConserFest was able to rally this age group to make a big difference.”

Since its inception, according to Justin, ConserFest organizers and participants have donated nearly $40,000 to the BIC.

It takes a village and then some

“The list of people who have given their time, energy, skills, and equipment is probably up around 100 all in all,” says Justin. They are a mixture of island natives and lifelong summer visitors. And though they may be spread out around the world in the winter months, the common denominator among all the ConserFest crew is Block Island, which, has played a formative role in their lives and worldviews.

“The island has been my most treasured environment and community since my earliest memories,” says Travis. “It is a sacred place for me and my friends, and family. It has been a place where I’ve grown up with friends, worked and then played music.”

Cameron says that ConserFest is a reflection not only of a conservation ethos, but an overall Block Island way of being.

“I feel ConserFest embodies much of what the Block Island spirit is all about. For me, it’s a more direct way to use my career in music and the music business as a way of offering thanks to the natural environment that has given me — and all of us — infinite love and inspiration.”

The property is in a particularly sensitive location — immediately north of the Beachead Restaurant on Corn Neck Road, straddling perhaps the thinnest expanse of land on the island — with the Atlantic Ocean to the east and Harbor Pond to the west. It has become a popular locale for surfers to congregate, as well as just a pleasant place to eat lunch in one’s vehicle and watch the waves break.

ConserFest organized many “Solviken Solution” events in the summer and fall. According to Justin, the Solviken Campaign chairman, around 20 people (all 35 and under) helped with them. “I personally could not have done these events without the help of the ConserFest generation,” says Justin.

Scott Michel says growing up on the island has made him all the more aware of how precious the place is. “As a teacher of science to the next generation, I am compelled to pass on my passion for nature,” he says. “I owe much of what I’ve learned and how I feel about the world to my parents, Doug and Barby. Together, they showed me what it means to love the place you call home — to protect its natural beauty, and to enjoy life on the island to its fullest.”

Travis adds: “From very early in our lives, we observed that as an island, Block Island is exceptionally vulnerable to its visitors. The mission is for ConserFest to be able to go beyond the events and become part of the cultural and social fabric for those that visit or live on Block. Visit it... celebrate it... advocate for it... protect and preserve it.”