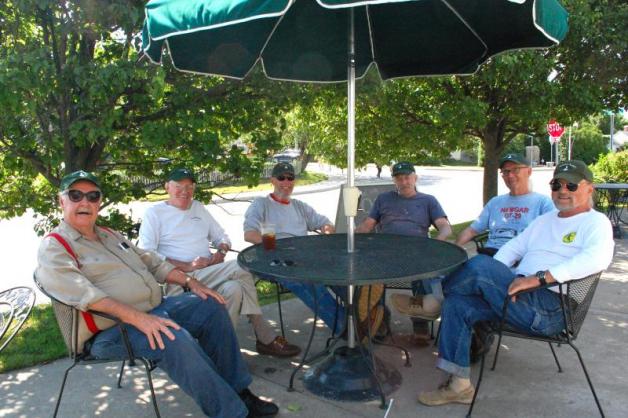 Adrian Mitchell rallies the troops with new caps and coffee at the Bagel Shop — from left are Mitchell, Dean Brown, Willie Feuer, Cliff Theve, Chuck McMellon, and Jules Craynook. Adrian was back on the trails after recovering from knee surgery and said how much he enjoys working with this group and how much he wanted to thank all the volunteers for their hard work and dedication. Photo by Kari Cutis. One of the biggest rewards of this volunteer work, says the author, is coming upon views like this one at the juncture of two Clay Head trails; ready for battle are Chris, Cathy and Nigel Joyce; as are Ray Torrey, Dean Brown, Peter Greenman, and Sochia Cohen; and Jules Craynook, Cliff Theve, Willie Feuer with houseguest Todd, and the Joyces; Peter Greenman walks along part of a Clay Head trail that has been studded with poles and ropes to keep walkers from danger and to help minimize further bluff erosion. Photos by Renée Meyer 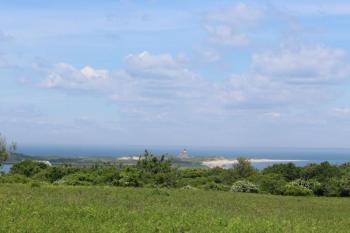 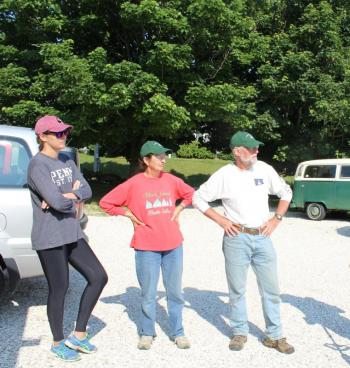 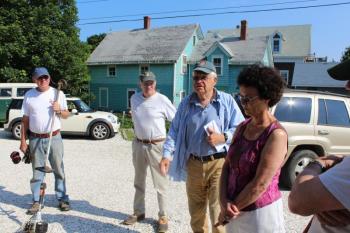 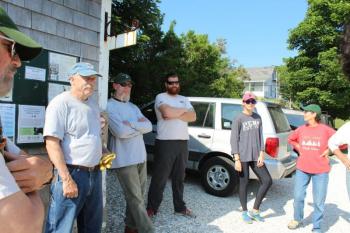 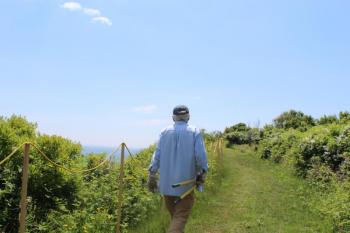 The group of volunteers meets at a most civil hour – 9 a.m. at the office of The Nature Conservancy on High Street. On this Wednesday there are a dozen. Some have done this for years, some, such as this writer are first timers. They are quite good natured for an army, and quite welcoming of the new recruits. What are they fighting? Vines, prickers and poison ivy. The suggested uniform is gloves, long-sleeved shirts and long pants. This is Adrian’s Army.

Their leader is life-long island resident Adrian Mitchell and their mission is to keep the miles of Block Island’s hiking trails clear of brush, low branches, dead trees, and in some areas clear of danger. Mitchell retired as head of Block Island’s “road crew” several years ago and, not wasting a beat, joined the staff of The Nature Conservancy in order to take on the task of maintaining its growing network of trails.

On this Wednesday Mitchell is unable to be there so Peter Greenman, his second in command, takes over. Greenman has been doing this type of work for nineteen years now, longer even than Mitchell. He estimates that between a few weeks missed for off-island appointments and weather, he does this 45 times per year. Yes, Adrian’s Army marches all year round. Magic doesn’t happen all by itself. Sometimes weather gets in their way, but not often.

The weekly nine o’clock muster starts with introductions and some banter. One of the newbies is a house guest of soldier Willie Feuer. Another is the 24 year-old daughter of Cathy and Nigel Joyce. She’s taking a two month leave from her job in Manhattan to spend the summer on the island. She loves to hike the trails and figures she might as well help maintain them.

Volunteers have brought their own weapons. From small clippers to larger loppers, everyone is armed. Ray Torrey has even brought a weed-whacker.

They compare notes on what may need to be done where on the island. One reports that the trails at Rodman’s Hollow need mowing. Greenman says he will pass that information on to Mitchell. Then he divides the group of 12 into three teams and gives them their assignments. One team is heading for the Gaffney Trail off of Lakeside Drive and the other two are heading for Clay Head. But not so fast. First there is the traditional stop at Bethany’s Airport Diner for coffee.

Robin is ready and waiting with extra coffee on hand and mugs lined up along the counter. We all sit at the picnic tables outside and soak in the sun on this, the first truly hot day of the season. Talk quickly turns to some pressing island issues, but it’s all in good fun. Then we head for the trails.

Up Corn Neck Road we go in Greenman’s old VW bus, headed for Clay Head. On the way Greenman explains that the erosion caused by Superstorm Sandy was quite severe and he wanted to show this reporter the work they had done. We turn up what seems like an impossibly narrow and steep road for the bus; fortunately we meet no one coming down. When we park at the end of the road we are quickly met by the other Clay Head team. We are at some mid-point in the Clay Head trail, and Greenman and team head south on the trail while the others head north. First we all admire the view though. In the distance below us is the North Light, Sachem Pond and the ocean beyond that.

A large schooner sails in the distance. Both Greenman and another member of Adrian’s Army say that doing this trail maintenance has led them to discover areas of the island they never knew, and opened up vistas they would otherwise never have seen. This is one of the rewards for what they do. Over the past several months the army has done a lot of work at Clay Head. In the wake of Sandy the trail along the bluffs had become dangerously close to the edge and Greenman is particularly concerned about the safety of hikers, especially children who love to run ahead of their parents on the trails.

So what have they done? They have cut new trails and blocked off old ones, either with cut brush or with sections of a split-rail fence, essentially moving the trail away from the dangerous edge. In one area they have put up posts with rope atop to warn people away from the ledge – only four feet away. Still, Greenman worries. He’s hoping that they can put up some signs to warn people of the possible dangers there.

Today we have come to give the trail a “haircut.” The goal is to clip back branches and vines that are extending into the path: anything that might snag a hiker. The work is leisurely and enjoyable. Blooming wild roses and native Arrowwood viburnum are in full bloom along parts of the trail. The scent of the roses alone is enough to have made the morning memorable but the company is just as good.

Along with Greenman the team is made up of Sochia Cohen and Dean Brown. Cohen has been doing this about once a month for several years. Brown joined a year and a half ago after retiring, although he has been active in conservation on the island since the 1960s. His son-in-law thought he needed something to do. Cohen and I work our clippers while Brown and Greenman go after the larger stuff with their loppers.

We all move up the trail, talking and clipping as we go. On this day the subject of Iraq dominates. Greenman says the discussions get particularly lively when it’s local election time. Before we know it we reach the end of the trail and turn back. When we reach the bus the haze has cleared some and the view of the North Light is even more spectacular. The other team has left a note under the VW’s windshield wipers. “The trail is clear so we headed to the Hodge Property.” Off to fight another battle.