Memories of the Mansion 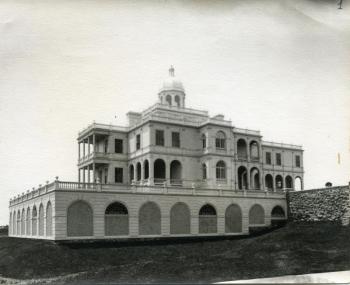 Above: The newly constructed Searles Mansion in the late 1880s. Photo courtesy BI Historical Society Below: The author in her front yard in 1953; Members of the island road crew at the site they’ve been working to clear all winter, from left: Bob Gallant, Mike Shea, Jaixen Hall, Dick Stinson, and Joe Pokraka. Photo by Kari Curtis; The old foundation visible again. Photo by Doug Gilpin 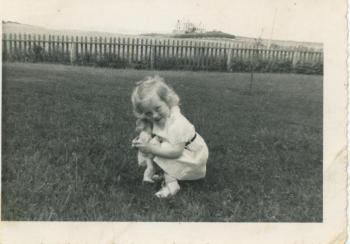 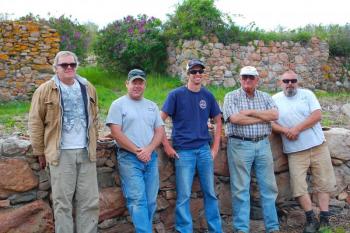 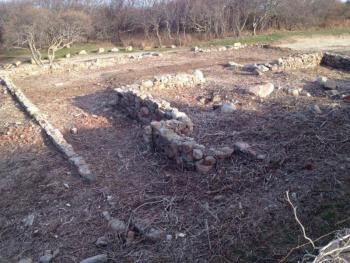 “I try to have one project every winter,” Highway Department Head Mike Shea says, quickly qualifying it with: “Of course, it’s all weather dependent.” The comment brings to mind the clean-up of superstorm Sandy, winter storm Nemo, and several blasts in-between, which consumed their time last winter and spring — and a less demanding year when Mike and his crew cleared the Sheffield Cemetery, a gem hidden west of Corn Neck Road.

This year they have been back at the old Searles Mansion site. It is a long-term project, and this latest round is a continuation of work begun more than 10 years ago with the clearing of the back kitchen, the masonry walls through which the path from the upper parking lot winds, and the stonework back foundation of the main building. Among the long buried pieces uncovered then were anchors of the flagpole that sat to the north of the building, brick and concrete blocks that secured a full-rigged ship’s mast visible in some old photos.

The retaining walls that ran in a northerly-southerly direction on either side of that fragment of foundation were cleared of masses of ivy. Contours of land long hidden emerged and already it is hard to remember that the places we walk were once covered with briar and brush. This season, before the snows came, Mike and his men tackled the most overgrown piece, the masonry outlines of the main building, for all intents and purposes untouched since the 1960s. It has long evoked “If only they could...” thoughts but the task has seemed to this frequent observer too big, too long undone.

It was a real gift to walk up from the beach into the parking lot, a way not usually taken, on Christmas Day and discover the stonework that had for so long been no more than a memory.

I grew up with the Mansion in the background; it simply was there, a once-elegant building that had been made awkward with the removal of the huge terraces that wrapped around it on three sides. It seemed to sit on a a full story of weathered, windowless gray, easy to draw in memory, difficult to explain even with photos at hand. It is in black and white snapshots taken in my front yard, a spot of white in the landscape, a half eaten wedding cake rising from old farmland.

The building was occupied only seasonally, as a boarding house, then a private residence, and in winter we would creep past, sometimes daring to go up on the porch on the south side of the kitchen and follow the steps down to what is now the lower parking lot. There was always a line of low foundation in the grass around the building, the base of that sweeping terrace taken down after the 1938 hurricane exacerbated years of deterioration.

One of my clearest childhood memories is my first view of photographs of the Mansion in its glory days. I do not remember where or why, only that these images were projected on a screen, and a bit of history given. The entrance was impossibly straight and smooth, not the windy puddled track I knew, recognizable only by the brick piers, since pulled down, and their square stone companions where gates had hung. “And they tore off the terraces!” I announced to my father over supper and he must have found it very amusing, his response was a dramatic, “They were bad men, weren’t they” and I squirmed, knowing by his voice those former owners were not at all evil. Later I realized they were just cash strapped, another in a series of owners who couldn’t quite turn the dream to reality.

Built in the late 1880s by Edward Searles and his wife, widow of railroad magnate Mark Hopkins and once described as the “richest woman in America,” the structure followed the “English Mannerist” theme. The architect, British-born Henry Vaughn, did several other commissions with and for Searles, who was also a designer. Railings on the terrace were echoed in the balustrades at the edges of the flat roof of the main building and the square belvedere atop it. Earliest photographs show a crowning domed lantern.

The surface walls of the grade level terrace were rusticated, wood treated to resemble stone. Architect Doug Gilpin, who often walks the family dogs by the site, calls attention to “the hierarchy of the Classical Orders” as the stories rise from the Terrace Level: Roman Doric, then Ionic Order, and finally Corinthian. He notes “All columns are resting on engaged plinth bases that form wainscots on the walls, and balustrades at the porches. A really nice touch, and masterfully detailed and executed. The lantern is especially delicate, and has Christopher Wren influence.”

A landmark from the day white paint was first applied, the Mansion is described in a 1890s guidebook:

“The most magnificent of these [summer cottages], and indeed, one of the finest in the world is the elegant mansion of Mr. Edward F. Searles of Methuen, Mass., who has here exhausted all the resources at command of almost fabulous wealth in the erection of a stately pile of oriental splendor. Every stranger approaching the Island asks about the imposing structure, whose noble dome glistens in the sunlight on the southern slope of the Corrugated Bluffs of the Neck.”

The dome was removed after a year of winter winds; 50 years later the Mansion had been reduced to “white house flat roof” on nautical charts.

One summer the Historical Society hosted a tea there; I remember mainly the dark wooden staircase and tall, tall windows. Long storied to be a “twin” house, it was simply symmetrical, the ground floor open to the outside walls. That grand staircase rose around a core open a full three stories to the belvedere ceiling. The clearest memory is the last, the building burning to the ground in a few hours on an April night in 1963. We stood closer to it than would ever be allowed today, watching the open wooden structure disintegrate before our eyes, embers arcing up over the pond to land on the wood shingled roofs of the Littlefield farm. The Coast Guard had arrived with their fire fighting equipment and I remember my big brother, a strong high school senior, jumping on their truck as it departed, sent off after the assessment that the Mansion was beyond saving but the farmhouse was in peril.

Another school student standing nearby remarked that it was like the short story by Poe, “Fall of the House of Usher.” It did not quite meet the story line, but there had long been a doomed feel to the place beginning with the death of the wife of the couple who built it, a year after it was completed. Ownerships changed, it went on the block at a tax sale; a brief flare of life in the ‘20s could not truly break a slow and steady decline.

After the fire, four chimneys stood, all but the one in the back-kitchen “ell,” all a full three stories high and given to swaying in the wind. The foundation was filled with twisted metal fallen onto what those gray wood walls enclosed: a great brick cistern, intriguing but deemed by all the grown-ups unsafe. The chimneys were pulled down, the cistern bulldozed in and the site largely neglected, becoming more of a challenge every year. When first purchased by the Town in 1984, the priority was public access, roads were moved and parking areas cleared; restoration of the historic component was far down on the wish list.

The foundation disappeared, overgrown with the briars and vines covering the inexplicable pieces of metal that fill untended spaces. The brush in many cases turned to small trees that this year have been cut and stacked in piles along the grass. The exposed stonework looks, as is often the case, too small to have ever supported so grand a house.

Another member of the road crew virtually lit up when this job was mentioned; this particular task, like the clearing of the Sheffield Cemetery, is more than routine maintenance, it is uncovering a story and giving it back to the community.

Today, with the foundations almost completely exposed it is easy to make sense of the photographs of the grand house that sat at the edge of the sea, that aged poorly but finally, at its end, disappeared in a blaze of long awaited glory.