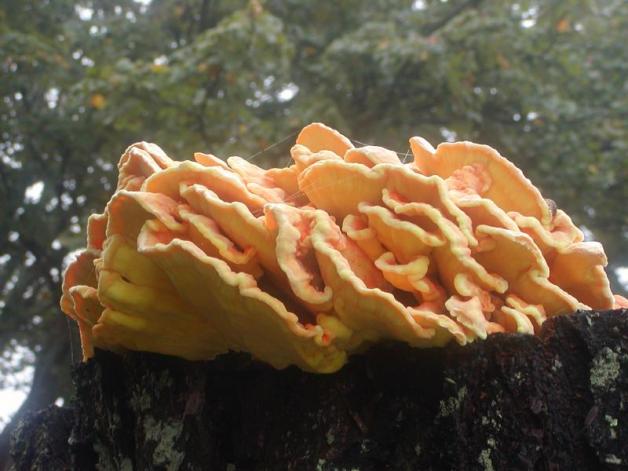 Chicken-of-the-Woods, a shelf or bracket fungus. 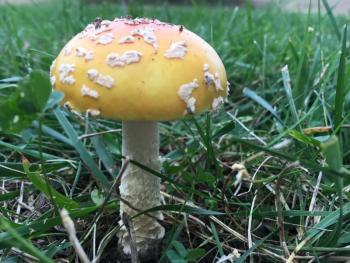 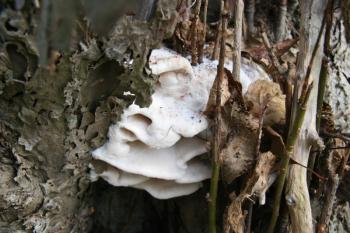 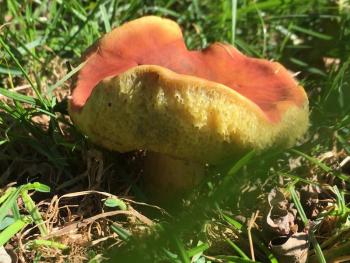 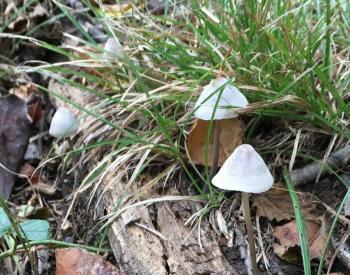 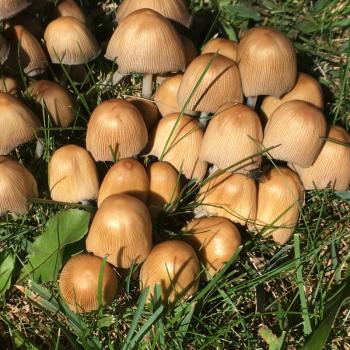 “The sudden appearance of mushrooms after a summer rain is one of the more impressive spectacles of the plant world.”-  John Tyler Bonner*

Late summer through fall is an excellent time to slow down and take note of some of nature’s remarkable phenomena: plump striped monarch caterpillars become elegant butterflies; dry, tawny, summer fields become washed in golden goldenrod; the island’s ubiquitous Gray catbirds are replaced by flocks of migrating warblers; and, suddenly mushrooms appear in predictable spots – and, where they have never been seen before.

Chicken-of-the-woods (Laetiporus sulphureus, formerly Polyporus sulphureus) is a beautiful fungus in both form and color, and in the mystery that it evokes. To come upon this bracket mushroom in late summer or fall and watch it grow, glowing with color, and then fade and dry and crumble at autumn’s end, is to witness the magic of appearance and disappearance.

The particular mushroom photographed here grew on the stump of an old tree on Corn Neck Road. It is a fungus that I had seen on this tree many times over the past thirty-plus years; first brought to my attention by a friend and mentor who taught me that it was edible and delicious, and in subsequent years safeguarded from the skillet by its nearest neighbor - steward of its beauty, and for the opportunity of admiration and conversation.

Mushrooms have mystique: they can be edible, poisonous, and medicinal. And in the case of the Corn Neck beauty, it conjured past memories, catalyzed communion between friends, and alas, was likely the hex on the old tree. Also called chicken mushroom, this species is found throughout eastern North America and is known as a “heart rot” fungus. Usually by the time the mushroom appears – long after an infestation of the minute mycelium of the fungus throughout a tree’s crevices leading to the heart wood – the tree’s health, if living, has already been severely jeopardized.

Mushrooms that we see, are actually just the fruiting body of the organism. A fungi is primarily made up of mycelium, a vast network of fungal threads underground, or within the substrate on which the fungus is growing. The fruiting body, i.e., the temporary part of the funguses life cycle can take many forms. These forms – cap & stalk, puffballs, bracket or shelf fungi – are what we generally see, and refer to as mushrooms.

Unless you are an experienced mushroom hunter you should never eat a wild mushroom. But, admiring them in their many forms and colors as they suddenly appear – seemingly out of nowhere, and in unexpected places – is one of the great joys and surprises of autumn on Block Island.

*John Tyler Bonner, PhD is an ecology and evolutionary biologist based at Princeton University, and is a world renowned expert on cellular slime molds.

Advice from a Mushroom