My Block Island: Novelist and Summer Cottager Writes of Family Tradition and 20 Years of Memories 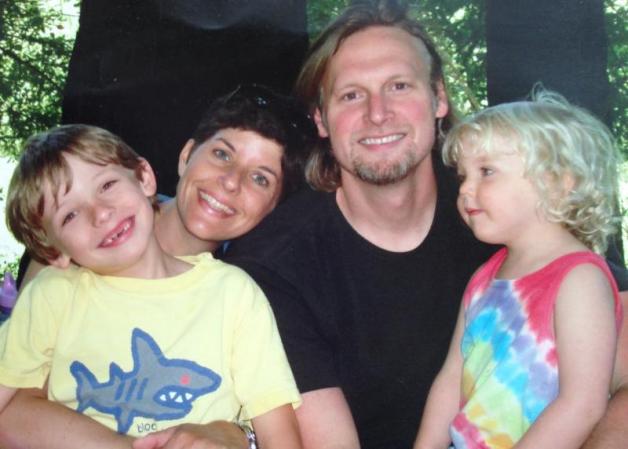 Josh Braff and his wife and kids.

Early morning on the Block and everyone’s asleep.

I jump in the Jeep and the tires spin a bit on our pocked and rocky driveway. Bob Seger’s on the radio, preaching about being a Ramblin’ Man. The morning breeze catches my face and I have to smile. Only one other car is on the road this early. We wave to each other and I think of the comfort of strangers, the island connection.

It is the summer again and time to let go of the grind, the very routine that afforded us such beauty and bliss. I randomly make a right turn and find a pond nearly hidden by the greenest of brush. The lilly pads are cartoonishly Monet, the fog and sun creating an overblown light. I drive further down the road and the view is the Atlantic and its vastness, silhouettes of ships in the far distance, then fishermen returning from the hunt. The foghorn sounds and I get a taste of the day’s heat on my forearm. Today will be magical on the beach.

Our house became my family’s rental back in 1998. My wife’s parents Stephen and Carol Schulte are art dealers from South Orange, NJ. They knew about the lilly pads, the vistas, the intoxicating scents, well before I found them. Their love of Block Island was something they’d instill in all of us, a group that began as seven and somehow, over a twenty year span, doubled in size.

We were first in a smaller home, just before Schulte-grandchild number-one arrived. But not for long. Grandchild two was coming and then soon, grandchild one from daughter two. But wait. Daughter two will have another and guess what? Daughters Alpha and Beta from daughter one have boys they want to invite.

“Let’s go to Ernie’s.” we’d say to escape, to take the little ones out for breakfast and allow late sleepers their rest.

We all know the menu perfectly. “The usual,” I can say.

I’d be so tired, jetlagged, brain-dead, with a Baby Bjorn embedded on my chest.

Somehow it lifted, the never-ending tasks of child rearing.

Recently, my daughter got her first Boogie Board. We put a leash on it and she and I approached the Atlantic together, both wary of its power. I put the Velcro strap around her wrist and she looks up at me, squinting from the sun.

“Alone? I can hold your hand until…”

I watch her walk out and then leap over the waves, my hand no longer required. I was meant to watch her independence heighten in real time, right before my eyes. Nothing is more Block Island than being privy to the actual growth taking place in my kids. My role is to stand back, to allow the ocean to teach her what it offers: that you must respect it, or it will bite you without conscience.

“There’s another wave just behind that one.”

“Yes, Daddy, and a hundred more behind that.”

We’re on Mansion Beach daily and the ebb and flow of the waves is lulling us into a time-warp of long walks and sandy naps that run into lazily read beach books. The family begins to plan dinner, just after we eat lunch on the beach. Often those sandwiches have been made from last night’s dinner, as meals at home are the routine.

A conversation kicks off as Time magazine is passed around. The politics of the day is timely and topical until it gives way to the next summer’s crisis, diluting the previous and so on. This too is a tide that moves in and out, leaving us feeling fortunate that we’re alive, in America, together, here. A truly healthy family.

I hear a plane, a puddle-jumper from Providence, beginning to make its descent. My son asks to take a walk and we end up in the water. From the waves I look back at my wife and see all the members of our group. Some kids, some teens, some boyfriends, twenty-somethings and older.

I imagine this very view the first time we came here, back when my wife and I were dating and I was the visiting boyfriend. We were a much smaller brood, only pontificating about what it might be like for us here in the future, if we married, if we had children.

Well, we did all that and flourished and passed down traditions and formed bonds between cousins and siblings and grandparents alike.

“I’ll see you next time on Block Island,” is how I say goodbye. “I’ll see you right here. When the ferry comes in.”