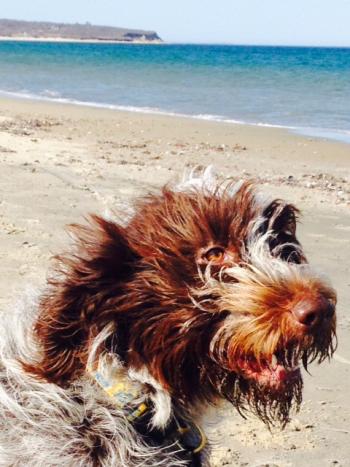 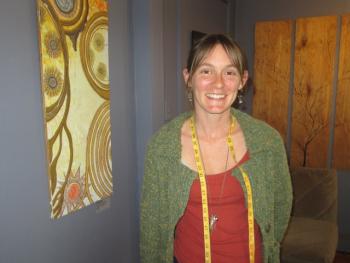 With a year-round population of just over 900 people, Block Island is not just a summer vacation spot. There people — young and old — who call Block Island home for 12 months out of the year. There are also people who come to block Island for the entire summer — to visit family, stay at their summer homes, to work or just relax. Whatever it is — everyone has their own story about Block Island. Here we share a few of them.
Do you have a "My Block Island" story? Send it to Kcurtis@blockislandtimes.com and we may feature your story in one of the Summer Times.

Island Dog: Furgi
An informal interview with a local pup:

Question: What do you dogs do out here all winter?
Furgi: Well, its a pretty social place. I have lots of friends, and get to go lots of places with my mom. I don't think I could do that on the mainland. When we are out walking, lots of people slow down to say hello to me, before saying hi to my mom! I also get biscuits tossed from trucks!

Q: What is your favorite part of the island?
F: Winter: The Hodge Preserve Summer: The fields on the Westside. (But, my mom keeps me out of farms and horse pastures)

Q: What is your favorite activity?
F: I can run and play for hours, and I love swimming in the pristine waters of Scotch Beach, but also enjoy a good mud puddle or swamp. I also take advantage of any opportunity to go boating. I just love the feel of that crisp breeze on my face. I first came here on a boat. The first time I sailed into Great Salt Pond, I somehow knew that it would be my home.

Q: Do you have children?
F: I do! Believe it or not, I have 11. It didn't end up working out with their father, but we are still friends. One of my daughters comes out to visit. She's totally my best friend. Oh boy, can we get into trouble together!

Q: Anything else we should know?
F: Well, not to brag, but I'm pretty smart. I can find birds in the thickest of brush! The sound of pheasants is music to my ears. (But not gun fire; that's why I came to live here with my mom....it's totally awesome that there is so much protected land here for me to explore!)

Q: One last question, what the heck breed are you, anyway?
F: Well, I get that alot. I have kind of a long name, and people make fun of me for it, and think that I want to sound like a fancy pants kind of dog. Not true. I am what I am, a Wire Haired Pointing Griffon. I'm just a regular girl, JOHN LITTLEFIELD!

We started coming to Block Island in 1979 and immediately fell in love with it. Our son, who was 7, was heartbroken when we had to return to New York and our "regular" life. So we promised to return and did. We have been coming ever since, and for many years have lived here full time. Our family has been coming for vacations and occasions and increasingly their friends have visited as well. Lewis' words make a lot of sense and his passion is understandable. Block Island is magical and generously gives us all something to love.
Nomi(Lewis' grandmother)

Block Island holds my family together because we visit a lot of other people in our family there. For instance, Block Island held my family together once when Poppi and Nomi [my grandparents], my dad, my mom, my sister, and I went fishing on my grandparents boat called Pipsi. My grandfather had a lot of trouble getting in and out of the boat, it made all of us very sad. In addition to that we caught two fish so that helped. Also while we're on Block Island we visit my great uncle Peter, my great aunt Patty, and my second cousins Chris and Talia. They don't live on Block Island, but they come in the summer like my mom, dad, sister, and I. They also bring friends named Nina, Johnny, Alba, and Gaby. In addition to that we also visit my grandparents, Poppi Joe, And Nomi, and their dogs Auggie and Schnitzel. They are the essential reason we go to Block Island. That is one reason that Block Island holds my family together.

On Block Island my family has many traditions. Some of them are, playing wiffle ball, playing Catch Phrase and going to the beach. For example once I was playing wiffle ball at mansion beach with my second cousin Chris, we had been playing for a while so Chris said "I'm hungry let's go grab some lunch." I said "ok." And after we had our lunch, I stood up and looked at our field... there were a bunch of people sunbathing on it! That is one of my favorite Block Island memories. Another example that shows this is when we play Catch Phrase. We often go late into the night playing and laughing at my great uncle's jokes. We normally play with up to twelve people. It is really fun! Those are some of my favorite Block Island memories and traditions.

Paige Gaffett’s heart has always been in art

Paige Gaffett spent her childhood happily shuttling between two ocean communities—Block Island and Narragansett.
Outgoing and vivacious, Paige exudes excitement as she describes those formative years and the way they fed her growing passion for art.
In spirit a child of the island, she is the daughter of Nat and Terri Gaffett, and granddaughter of Sandra and Lew Gaffett. Though her parents divorced, they remained friends, she says, each nurturing Paige’s early aptitude for all things artistic. From ages four to 18, Paige spent every weekend and summer on island. The last 18 of those years she says she worked for Finn’s and held many other jobs on island as well. Always doodling and drawing, she says her parents indulged her voracious appetite for art classes. Though attending school in Narragansett, during summers she studied with Teri McCombe, the art teacher at the Block Island School at the time. She also took classes at Rhode Island School of Design. Finding herself surrounded by artistic people, Paige credits McCombe and Emily Reeve, who taught drama to island children, as “creative forces in my life!”
On entering college, she notes, “My parents told me, ‘Make sure you’re doing what you really enjoy!’” She adds, “They always gave me the best advice.”
Paige majored in Textile Design and minored in Fine Arts at the University of Rhode Island, combining her interests in drawing, photography, and textiles. Though originally wishing to teach elementary art, she found education courses less interesting than those in fabrics, merchandising , the history of fashion and weaving. After graduation, Paige travelled and then settled on island in 2009. She met Sven and Laura Risom, as they were creating North Light Fibers and went to work for them. Learning the processes from animal fiber to finished yarn, she says, “It was so cool to learn to run a mini-mill and make yarn.”
In 2014, she and Felicia Cinquecgrana , a jewelry maker, founded HeartSpace, an artists’ collaborative that includes a gallery, shop and studio in which classes are offered. Paige and Felicia also teach a series of classes for children and adults. These include drawing, print-making, felting, ceramics and environmental art. The HeartSpace gallery sponsors rotating exhibits of island artists as well as space for developing artists to do their work. They are particularly interested in teens that draw—whether to use the space or to teach their own classes. Paige notes that the location of HeartSpace is especially meaningful because it is close to galleries in the Post Office building, the Spring Street Gallery, to the Empire Theater. She feels as though she and Felicia are contributing to a kind of arts district, which she finds exciting.
Paige’s enthusiasm and smile are contagious. She is welcoming and immediately greets those dropping into HeartSpace—whether to browse the gallery and shop, take classes or to work in the studio.