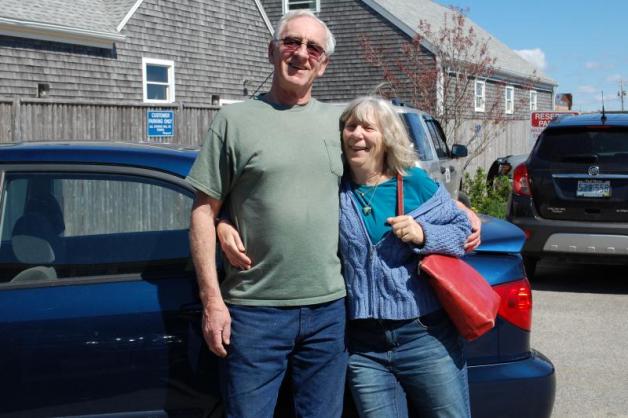 Above: Ron and Judy on the island today Below: Ron with his beloved El Camino in 1977; and mugging on the breakwall and on Crescent Beach on that first trip to the island in June 1977. Photos by Judy Tierney and Kari Curtis

In our house we mark the passage of our lives not just by our jobs or child rearing experiences, but by where we live and what we drive. One of our automobile eras was that of the El Camino, a Chevrolet that was a compromise between a truck and a car. Behind the sleek front seat compartment was a long truck bed instead of a back seat or a trunk, and the whole vehicle was as low to the ground as any car.

Like most people back then, we were a one-vehicle family, and it seemed like the perfect solution for Ron, who wanted a truck, and for me, who wanted the comfort of a car.

Though its body was a compromise, its handling was not. The El Camino drove like a truck. Every time I tried to get into a parking space, I spent up to ten minutes wrestling with the steering wheel. This came to an end one day when, as I was sweating, struggling and swearing on Chapel Street in New Haven, a stranger watching and chuckling on the sidewalk offered to park the green monster for me. I jumped out and turned the job over to him. I did not get his name, nor he mine, but I am sure we both told that story for many years.

The following week, Ron bought the parts for power steering and installed it into the green monster himself. Ever after, I did not get a daily workout with the steering wheel.

It was during our El Camino era that we went to Block Island for the very first time. We took a lot of weekend trips with that car and our tent, including to Rhode Island, where we wanted to see more than Misquamicut Beach, well known among Connecticut college students for its bars but not for its other attributes. So one Saturday morning we set out for a camping trip in our El Camino to Fisherman’s Park in Narragansett.

As we drove around taking in the sights, we passed the wharves and fishing boats at Point Judith, and saw the sign for the Block Island Ferry. Neither of us had ever been to the island  and it sounded like a good place to go. We parked the El Camino and jumped onto the next boat, probably one of the now retired small ones everyone used to complain about.

We went without an overnight bag or any thoughts about returning to the mainland. We just assumed if the ferry went to Block Island, it would also return.

It was a perfect June day, and June days are among the most wonderful times to be on the island. We hiked up the Neck past sand dunes where the roses were in full bloom and filled the air with their soft scent. We passed Scotch Beach Road and the site where our house now sits. As we climbed the hill toward Mitchell Farm, there were more roses. Honeysuckles crept along the stone walls. The air was the sweetest I’d ever breathed.

Later, we headed to Ballard’s Inn for a drink. Even before we walked through the open door, we could hear the sounds of full- throated laughter and choruses of sea shanties. It was race week, and the bar was crowded with sailors letting off some steam after a day battling the sea. It was a magical place, all dark wood with a large bar and those salty men.

We were enchanted, and stayed until after dark. Then we headed to the ferry only to find the last boat had already left. What to do? Back to Ballard’s, which at that time had a motel, but there were no empty rooms at that inn. The host made a phone call. He said everyone else was full, too, except maybe the Spring House could find something for us. He gave us directions, and we walked up the hill.

The Spring House managed to find us a tiny room on the top floor. Though dress for meals was formal then, they let us into the dining room in our jeans and camping grunge. While we ate, a bagpiper slipped in and strolled through, entertaining at all the tables until finally the keeper had had enough of his dirges and asked him to leave.

They could not have been nicer to us.

The next morning we sailed back to the mainland on the ferry, taking with us memories of roses, honeysuckles, sea shanties and bagpipes. We returned occasionally as day trippers over the years. We couldn’t afford the hotels back then and never seemed to call early enough in the season to snag a cottage rental.

Then during the early l990s, Rhode Island experienced a credit union/banking crisis, and the price of real estate dropped drastically. Our own banking had greatly improved and we were searching for a shack on the Rhode Island shore. Recalling that quintessential first day on Block Island, I wrote to Sullivan Realty, asking for a list of houses for sale. They sent at least eight to ten pages of mimeographed listings, and that is how we ended up with a house on Corn Neck Road, right smack in the middle of beach roses, honeysuckle, and sea winds.

Unfortunately, the El Camino didn’t make it to our Block Island era, and every so often, Ron laments its demise. In fact, if he reads this piece, he will probably start up a conversation with one of his buddies about that El Camino, which he treasured as much as any of his motorcycles, and more than any of the subsequent vehicles he owned, even his much-lauded Toyota truck.

Though we no longer have the El Camino, we still have the house on Corn Neck Road, and we still savor the scents of the roses, the honeysuckles and the sea air there. From our small patch of sea-land, we watch all the passersby, tourists strolling, cottagers running, workers bicycling, as they, too, breathe in the enchanted Block Island air and fall under its spell just as we did so very long ago.