The Block Island Yacht Club is as much about spreading the sailing bug as it is about sailing
Margie Bucheit
Sun, 09/01/2013 - 9:15am
Category:
Explore, Family Activities, Boating 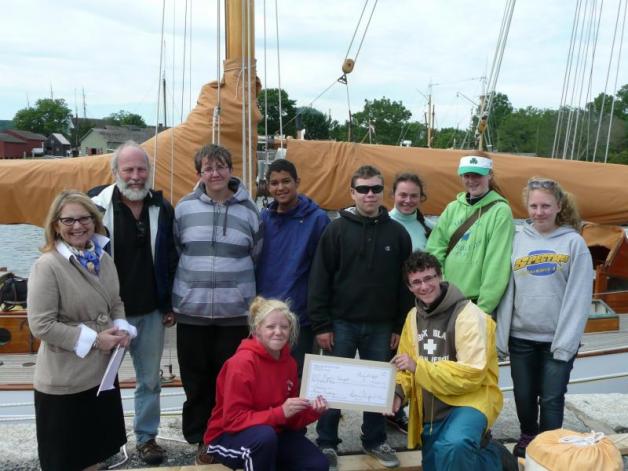 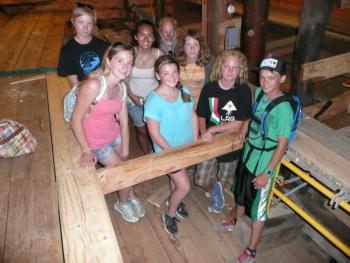 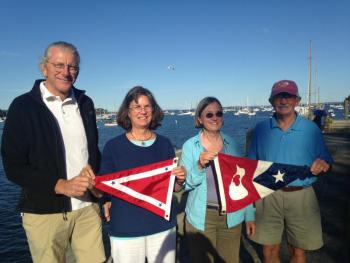 At a home with one of those outrageous Block Island views overlooking the Great Salt Pond, a group of boat lovers and sailors have gathered to celebrate. The sun sets, an American flag is lowered, and a cannon is fired. Welcome to Summer 2013, Block Island Yacht Club style.

One of only a few events the three-year-old club holds each year, the barbecue is a time for members to socialize, to get to know one another and to, well, talk about boats, the subject they love most. This high-summer event is different from the spring commissioning and a decommissioning in September. With the commissioning and decommissioning there is usually business to handle. BIYC members come from near and far and it is important to gather to conduct business as the Club grows. Some members are residents and some are not. Some sail and some do not. Some prefer powerboats and others cannot envision any other means of travel at sea than under a sail.

This, however, is a party, and it is overlooking a party. From this vantage point it is possible to see Sullivan House and Mosquito Beach off of Corn Neck Road. This being one of the most popular vacation weekends of summer, the harbor is packed with boats. It looks as if you could simply walk across the water by hopping from boat to boat. As the sun sets, ribs and chicken cook on the grill, and we watch boats at anchor turn on rigging lights, and the tent at Sullivan House, where another party is in full swing, the large white tent favored for weddings lights up the night.

Fun as a BIYC social event is, the organization is a nonprofit at heart, one that sees as part of its mission, providing maritime education opportunities for Block Islanders, and particularly students from the Block Island School. So it is not surprising that in the middle of barbecue revelries the Commodores call for members’ attention to share a little news, and to brag some about programs the club helped support.

For instance, BIYC has helped to make it possible for young Islanders to participate in sail training aboard the Brilliant, a schooner owned by Mystic Seaport. The Club also helped support a sailing education program for young people through the Town of New Shoreham and the Block Island Club. And members have aided in the restoration of a famous whaler, the Morgan in Mystic Seaport. That vessel, when completely restored, will be the flagship of the Mystic Seaport fleet. It is the sole survivor of a thriving whaling enterprise that once plied the shorelines of New England in the 1840’s. In 2014, the Morgan will be seabound again and hopefully will visit Block Island. For now, students from Block Island School have an opportunity to tour the boat and learn first-hand about boat restoration. At the request of the BIYC, this year’s seventh grade class presented a check to the Seaport from the Club, following a one-week spring sail training adventure aboard the Brilliant.

Still a fledgling organization, BIYC fleet captain Bob Krusewski says the club is exploring other educational opportunities for island young people and for adults as well.

“The point is we are looking to expand our efforts, focus and energies toward marine and maritime activities and education [on the island],” says Krusewski. Some ideas include encouraging members to participate in already established sailing activities on the Block, such as the Hal Madison Memorial Race and the Thursday evening light races.

But Krusewski and Rear Commodore Jim Fiorato see other possibilities. A rowing program, perhaps? Or sail training and navigation classes for adults. Most definitely the club aims to keep its educational focus on boats and their relationship to the sea, whether that education be historic in orientation or leaning more toward the science and mathematics of things.

Here at the barbecue, announcements are wrapped up about the successes of this year’s donations. By the end of 2013 the BIYC will have given about $3,500 to programs that enhance education for Block Island School students and maritime endeavors. The Club, given the cost of island real estate, operates without a clubhouse. There are blessings to not owning a building. There is the maintenance, the paying of a steward, and a host of other amenities that a clubhouse facility might be expected to offer. As it is, Block Island Yacht Club members who have moorings share theirs with yachtsmen from reciprocal clubs along the east coast and elsewhere. At the barbecue, two new burgees, pennant-shaped flags that identify a club by its symbols, are presented. One is from the Shelter Island Yacht Club, a mere five-hour sail from Block Island, and the other from the Camden Yacht Club in Maine, a more demanding four- to five-day sail away. The burgees will hang with 20 others in the club’s unofficial headquarters, a member’s barn over on the southeast side of the island, where the fall decommissioning, the closing of the season, will take place.

Here at the party, about 100 members are assembled to enjoy the cookout. There is talk about boats, moorings, travel to other clubs, and fishing. This house overlooks one of the best beaches on the island for bass fishing. Not all sailors like to fish, but like fishermen they like a good tale — particularly if it involves boats and Block Island. There are stories of waves crashing over the bow as a sailboat tries to enter the harbor on Columbus Day weekend. Why the individual was sailing at all that late in the season is just part of the cachet of the story. Yes, the boat made it in, with two soaked sailors, suitably humbled by the sea. A lesson learned.