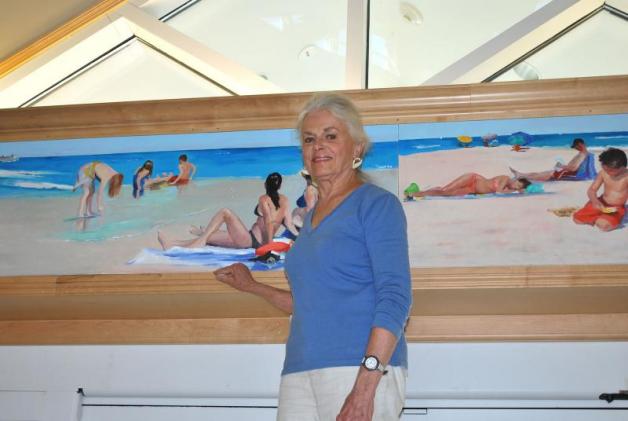 Island artist Marilyn Bogdanffy was chosen from a field of 287 applicants for a State Council on the Arts grant that enabled her to create this mural for the island’s airport. Photos by Kari Curtis

A mural commissioned by The Rhode Island State Council On the Arts and painted by resident artist Marilyn Bogdanffy went up this August at the Block Island Airport.

Titled “Four Seasons On Block Island And Why We Love It,” the mural is 100 linear feet in length and wraps around the bottom of the atrium in the center of Block Island’s new airport terminal. It was commissioned as part of the Council’s Percent for Art program, which acquires artwork for state buildings and facilities.

“I am very pleased and excited that the state-sponsored art project, originally conceived and planned for the airport in 2007, is finally coming to completion,” island resident Ray Torrey, who was also one of the judges for the project, said in an email. “We are blessed with many accomplished artists on our small island and one of our own, Marilyn, was chosen among 287 applicants.”

Torrey is a former member of the Town Council who, when serving, was asked to be the Block Island representative during the planning stage of the new airport terminal.

“I was chosen to be one of the five judges to select and award a substantial commission to an artist who would propose the winning idea,” said Torrey. That commission was $85,000. The recession of 2008 put an end to the idea, Torrey said, but added, “Somehow, as if by magic, the money was found and the project was resurrected in 2011.”

Torrey said the field of 287 artists was narrowed down to three, which also included two other Block Island residents Cindy Kelly and Sven Risom.

Randall Rosenbaum, Executive Director of the Rhode Island State Council on the Arts, welcomed this new addition to the state’s public art collection.

“We’re delighted to have worked with artist Marilyn Bogdanffy to bring this new work to the Block Island Airport, and particularly pleased to have commissioned work from a local Block Island artist,” Rosenbaum said in a press release.

“I have had a passion to paint all my life. I am indebted to the Rhode Island State Council for the Arts and the R.I. Airport Corporation for giving me the opportunity to make this statement of love for Block Island,” Bogdanffy said.

Bogdanffy said the contest presented some unusual challenges. “To begin with, it was a competition held through the internet, which was a new thing for me. Generally, you send files in and they judge your work and let you know,” she said.

Then, the space where the art was going to be placed was long and narrow.

“I had to have the panels cut by Michael Brownell, who was just great. He cut all the wooden panels and I applied canvas to each of them — each panel was made to fit the space,” Bogdanffy said. “I worked on the painting for five-and-a-half to six months, six days a week, because I wanted to make sure it got done.”

Rhode Island’s Percent For Art Law sets aside one percent of the budget for state construction projects for the acquisition of art, according to the press release announcing the project.

Under the process established in the law, a panel was convened to choose an artist for the commission. The following people served on the Block Island Airport selection panel: retired Block Island Second Warden Ray Torrey; Brower Hatcher, a national public artist who lived on the island for 10 years; Kathy Hodge, a painter from East Providence; Ahmed Shihadeh, engineer for the R.I. Airport Corporation; and Luis Torrado, the architect for the new airport building.

The panel specifically indicated a desire to give preference to an artist from Block Island.

Bogdanffy has lived on Block Island year-round for 25 years. Her husband was a pilot who often flew in and out of the airport.