The Not New Boutique 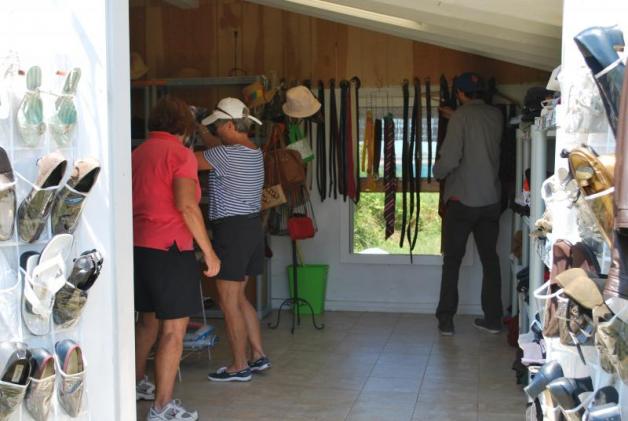 Workers set up shop while visitors perused the gently worn clothes, bags, shoes, and ties at the Not New Boutique behind St. Andrew Parish Center. Photos by Kari Curtis 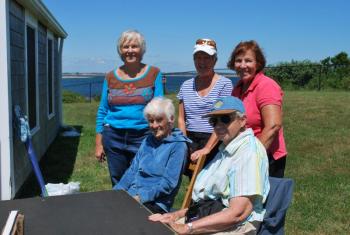 Almost hidden behind St. Andrew Parish Center on Spring Street sits a small cedar-shingled shed-like building bearing a plaque in memory of Joseph and Katherine Tucker, its former owners. The sign calls it the “Cow Barn Property,” but today it is better known as the Not New Boutique. Every Wednesday during July and August, a steady stream of shoppers, young and old, big and little, residents and visitors, made its way toward the balloons at the entrance, eager to find that perfect bargain.

The Not New Boutique came into existence some 20 years ago, the brainchild of Mary Donnelly, Barbara Bebby and Alice Kelly of the Ladies Guild of St. Andrew Church. The purpose: to serve the entire Block Island community and its visitors, not just the church members. It began in the basement of the Parish Center, with clothing laid out on tables. Father Ray Kehew had just arrived. Mary D remembers that he almost immediately bought a tweed jacket at the Boutique that he continued to wear on vacation cruises for many years. Two sales were held annually, at the beginning and at the end of “the season.” Eventually the project outgrew this location and the current building became available.

Today shelf upon shelf of neatly organized shirts, sweaters and pants plus racks of dresses, skirts, coats and jackets – for men, women and children – invite the careful shopper. Islanders are encouraged to leave their donations of “gently used” or sometimes even brand new items in a bin next to the Parish Center. Most clothing – household items are not accepted – is priced at $1; dresses, sweaters and shoes cost $2, while jackets and coats go for $5 or $10.

For the current organizers, Joanne Hutchins, Wendy Northup and Pat Queally, it is a time-consuming but rewarding undertaking. Every Wednesday they can be found, often aided by Janet Merritt, Helen Lynch, and me, helping shoppers to find just the right items. Between Wednesdays, the clothing dropped off at the collection box must be sorted and put on shelves. Particularly for island workers who perhaps couldn’t make the Wednesday opening hours of 10 a.m. to 2 p.m., Joanne has even on occasion opened the boutique for a special request. Wendy’s husband Ed does much of the heavy lifting and repairs around the building.

Of the workers, only Janet Merritt is not a member of St. Andrew Church. So why does Janet volunteer her time there? She says that since the Catholic Church opens its facility to the island’s Jewish congregation, she feels the need to give something back in the form of her time. “Besides,” she says, “I love to shop. What can I say?” She even keeps a constantly growing running tab of her own purchases.

Helen recently brought in a practically new pair of running shoes and a lovely purple and black dressy jacket. She was delighted that both were gone within minutes to a couple of very happy shoppers.

The danger, of course, is buying something and wearing it to a place where the original donor recognizes it. Several years ago I snapped up a navy blue cotton sweater with cats embroidered down the front. I wore it one day to a meeting. The president of the organization took one look and said, “I used to have a sweater just like that.” Indeed she had; but now it was mine!

Stories also abound of clothing being sold by mistake. One day a man took off a sweater he was wearing in order to try something on. When he next turned around to put it back on, the sweater was gone, sold to someone else accidentally. My own hat almost met the same fate one Wednesday in August.

Wendy tells of a man she noticed poking around intently. She asked him if there was something special he was looking for. “I’m looking for my pants,” he replied. “My wife took them from my closet and put them in your collection bin. I want them back.” Luckily the pants had not yet been sold, and he even insisted upon paying the $1 to retrieve them.

Recently two sisters ‘of a certain age and size’ giggled their way through a box of larger size slacks and blouses and jackets. Some of the items still had the original sales tags on them. “It looks perfect on you – and you can even button it!” remarked one. Their final tab: $18 for a wide assortment of clothing. Asked if they had a car to tote home their goodies, one of the sisters quipped, “I think we may need a truck.”

The proceeds from the Not New Boutique, which can amount to several thousand dollars in a season, are used to fund projects decided upon by the members of the Block Island Catholic Ladies Guild of St. Andrew Church. Several years ago, the baby grand piano at the Parish Center was completely taken apart and re-assembled and re-tuned, and paid for by the Not New Boutique. Funds have also been used to refurbish the stained glass windows in the church on Chapel Street, and to purchase new carpeting.

The Not New Boutique will hold its final sale days of the year on Friday, Sept. 6 from 5 to 7 p.m.; Saturday, Sept. 7 from 10 a.m. to 1 p.m., and Saturday, Oct. 12 from 10 a.m. to 1 p.m. There will be no further clothing collection after October 1. The organizers plan to empty the shelves completely to start fresh and new next year on Saturday of Memorial Day Weekend, May 24, 2014.