One Honey of a Day 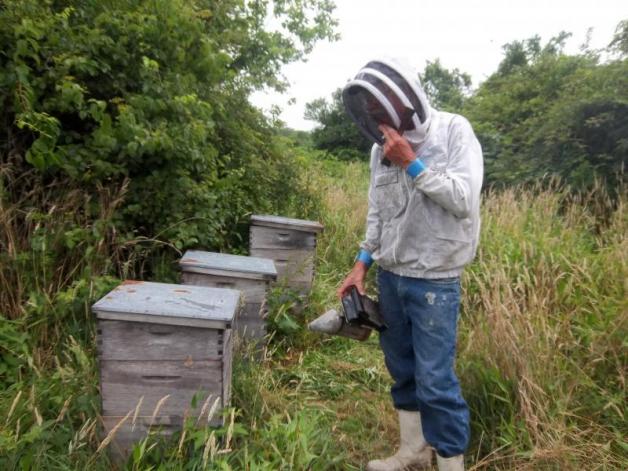 The farm’s hives are stacked wooden boxes. The lowest level is a bottom board with a slit that allows the bees to come and go. Atop that are two brood chambers , in which the queen lays some 3,000 eggs a day for the nurse bees to tend. The top boxes, called supers, hold eight to 10 frames in which the bees store their excess honey.

The day I went with Chris Littlefield of Littlefield Bee Farm to check for honey was slightly overcast, with thin clouds creating a white haze over the sun. It was incredibly hot, and I watched impressed as Chris used tape to bind the cuffs of his bee suit tightly to his wrists and emerged from the truck with his jeans tucked into heavy boots.

This is, of course, typical for a beekeeper, but it certainly wasn’t standard garb for the weather. As we trundled down the overgrown road leading to the hives, and Chris told me, in my summer skirt and top, to just jump in the truck in case the bees got upset, I realized that this was going to be a very unusual morning.

That’s the thing about keeping bees — a beekeeper is working with a creature with different habits from his own, one who will not work well with typical human conventions, such as short sleeves in the summertime. “Well, it’s agriculture,” says Chris. “You’re forcing an animal to work with what humans provide.”

Driving up to the hives off Corn Neck Road, I feel as if I am being shown into someone else’s home. Nothing seems to stir but bees inside this little nook in the Block Island jungle. Dozens of bees swoop in and around the bushes, carrying pollen from nearby wildflowers, while little black dots whiz through the sky. As soon as I get out of the truck, tiny buzzing sounds around my head, softer but more substantial than a fly would make, let me know that I am suddenly in their world.

The bee’s knees
Chris describes caring for bees as a year-long partnership. There’s always something to do, and every season is as important as the next, he says. In late fall, the hives need to be prepared for a long winter. They can’t be too dry, but wet hives are worse. Bees overwinter by forming a tight ball, or a cluster, which keeps them warm, and by letting their metabolisms fall. Typically, they will stay this way until spring, when warm weather signals them to go out and start collecting pollen and nectar.

Years like this year, however, with warm weather coming before there was pollen available, and a wet spring, in which bees can’t fly, meant that the bees were out before the world was ready for them. Chris needed to feed the bees sugar syrup and honey in a special feeding tube contained inside the hive, with wildflower stems sticking out for access.

Before the season starts in force, a beekeeper must clean the hives, and replace any that didn’t survive the winter. In the spring, summer, and even into the fall, bees gather nectar and pollen from around the island, their favorite sources being goldenrod, asters, and blackberry. Pollen is mixed with honey and fed to bee larvae; nectar is consumed by adult bees in small amounts, and is processed with enzymes in bee stomachs to begin honey production.

Once the nectar has been in contact with the enzymes, it is put into combs on the outer edge of the panel walls, and the water is then left to evaporate (with help from the bees, who fan the nectar) to eventually produce honey. Later in the summer or fall, beekeepers check for honey and extract it, leaving enough for the bees to make it happily through the winter.

The process of checking for honey begins this day with Chris lighting a smoker, which is essentially a can that can be used to pipe smoke into the hive and over the bees. The smoke serves to make the bees more docile; thinking that their hive is on fire, they grab honey, which curves their abdomens and makes it harder for them to sting.

After gently piping smoke into the entrance to the hive, Chris pulls off the top panel and then pipes more smoke over the mass of bees that is walking over the honeycomb.

All the buzz
This is what I am most excited to see — what does a hive look like, full of honey? Beneath the top cover, all you can see is a mass of neat panels, lined up side by side, and of course a number of bees. Chris uses a small metal spatula to loosen the wax and propolis (a sticky gray resin bees make from plants), and extracts a top panel. It is covered in surprisingly calm bees — and in combs leaking honey.

“You can taste it,” Chris tells me, wiping a finger along an exposed broken comb. I am slightly shocked that so much honey has simply appeared, and touch a pad of my finger to a drop of honey. The honey itself is pale and golden, a gently flowing liquid; I taste something very different from honey I’ve had before, something like a burst of gentle sweetness. Honestly, the best I can tell you is that it tasted like summer, a pop of sweet, warm like a blackberry is warm when you pull it off a bush in the sun — but also strangely alive.

This is the same honey that’s sold by the farm except it’s not strained, as it is before sale. Chris puts the panel back and checks a few more, all filled with honey. He is pleased; due to the strange winter and hard spring, he’d been uncertain whether the bees would make any at all. He checks the hive next to the first, and the one next to that, and then several across the way — all are put back, dripping, with bees swarming back in and filling the air with the sound of quick flight. On a particularly appealing hive, Chris uses a knife to cut off a piece of exposed comb, and hands me a slice. It is chewy and somewhat sticky, yielding reserves of honey, and doesn’t crumble, like a cross between a Tootsie Roll and hard gum, it is filled with a light, fragrant cream.

Minding our beeswax
The top box of a hive is filled with honey; the deeper ones below, appropriately called “deeps,” contain the brood and the queen bee, and less honey. Straining under the weight of a full top box, probably containing about 60 pounds of honey, Chris uses the metal spatula to show me a panel from a second box. I am surprised by how beautiful it is —like a work of art, with the brood, their pollen, and honey arranged in arcs, like a rainbow. On the bottom are a number of brood, which look simply like combs that have been papered over; on top is an arc of pollen, mixed with honey to feed the developing larvae, dark in color, like the wood of the hives; and on top of that, in the corners of the panel, is honeycomb. Although she wouldn’t show herself, the queen is somewhere among these lower panels, moving up higher as the season progresses.

Feeling quite satisfied with the honey he’s found, Chris replaces the top panel on the hive and straightens up. All the disturbance has created a very large swarm of bees around the hives; the air is thick with them streaking to and fro. We quietly pack up the smoker and Chris’s tools and then sneak into the truck, driving down the road, dodging pricker bushes.

In a few days Chris will come back with his honey extractor, a sharp knife, and a leaf blower to open up the hives, remove the wax and the bees and allow the machine to drain honey from the panels, like a washing machine’s spin cycle.

As we drive away, he talks about the rise in the number of farms, and the renewed interest in beekeeping, just as a horde of diseases threatens to destroy bee populations around the world. Chris himself has been keeping bees on the island for almost 30 years. It reminds me of how ancient the art of keeping bees and collecting honey is, and how important it will be for the future.