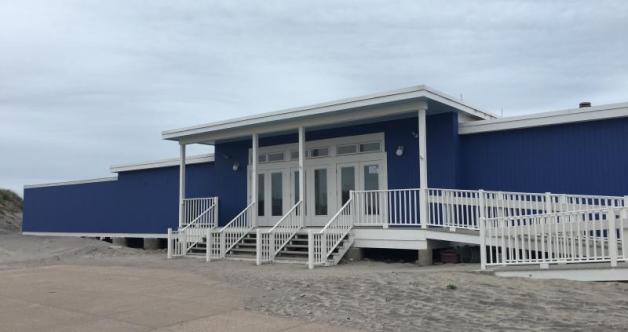 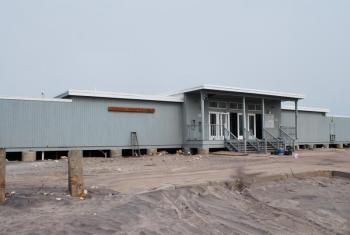 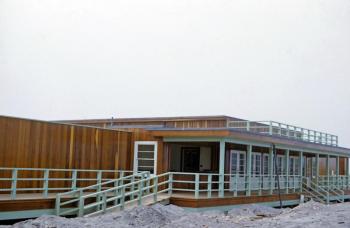 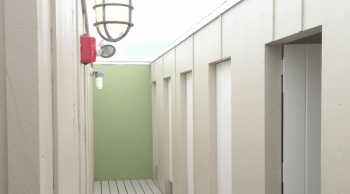 That’s what Recreation Department Assistant Cindy Lemon said when asked her thoughts about the newly renovated Fred Benson Beach Pavilion, which will be opening full-time this Saturday for the summer season. The pavilion has been freshly painted an eye-catching blue on its exterior walls that are framed with white trim.

“I love the color,” Recreation Department Director Dave Sniffen told The Block Island Times. “It was colored Manitou green — (some have called that sea foam, or State Beach Green) — but now it has a nice contrast. Everything looks clean and fresh.”

“We’re excited about it,” said New Shoreham Town Manager Ed Roberge. “There have been positive comments about the quality of the work. People seemed to be pleased.”

Town Councilor Martha Ball posted a photo of the beach pavilion on her Facebook page and received primarily favorable reviews. Some comments included: “Matches the sky!” and “Perfect color!” while others were worried that the color may fade. A few people didn’t approve, and some were undecided.

“They did a good job. We had a fairly tough building to work with,” said Town Facilities Manager Sam Bird, who has been overseeing the project and chose the exterior wall color.

Bird said the project came in under its $940,000 budget, and “the change orders were less than one percent.” The change orders accommodated components that needed to be addressed on the project. He said the design schematic was drafted by Northeast Collaborative Architects.

It’s been a long haul for the beach pavilion, as the town tried unsuccessfully over the past few years to engage a contractor for the work. That changed in August of 2017 when Lincoln-based contractor Mill City Construction, Inc. bid $843,585, and was awarded the project.

Mill City began the light renovation work in the fall, installing new amenities in the women and men’s restrooms and two dormitory-style rooms (three bedrooms) for rental by town-employed lifeguards. Sniffen said the three lifeguards have been hired and are occupying the rooms in the building. He noted that the Town Beach will be staffed with a total of seven lifeguards for the summer season.

“The lifeguards seem to like living there,” said Sniffen. “What’s not to like when you wake up and walk out your front door and you’re at the beach?” Sniffen said the lifeguards have “a microwave and a mini fridge” in their rooms, while also having access to the bathroom and shower facilities.

Lemon said the town is “planning to do a tribute to Fred Benson in the fall on the wall of the beach pavilion with pictures and a bio.” The late Fred Benson has a storied and charitable history, which included winning $500,000 in the Rhode Island State Lottery, providing scholarships for college students, and serving as Chief of Police, President of the Chamber of Commerce, and Fire Chief on Block Island.

“I would like to do something about Fred. It would be a good thing to do,” said Bird, who noted that Providence Painted Signs would be creating a sign that said “Fred Benson Beach Pavilion.” Bird said the sign might be made of aluminum and delivered in the fall, while the old sign will probably adorn the exterior, and later be affixed to a beam inside the building’s interior.

A video of the Fred Benson Beach Pavilion can be found on YouTube: https://bit.ly/2Mmpl4y.