From the Triathlon to the Turkey Trot, there’s an island race for runners of every stripe
Brooke Ortel
Tue, 02/25/2014 - 9:15am
Category:
About BI, Four Seasons, Explore, Family Activities, Recreation 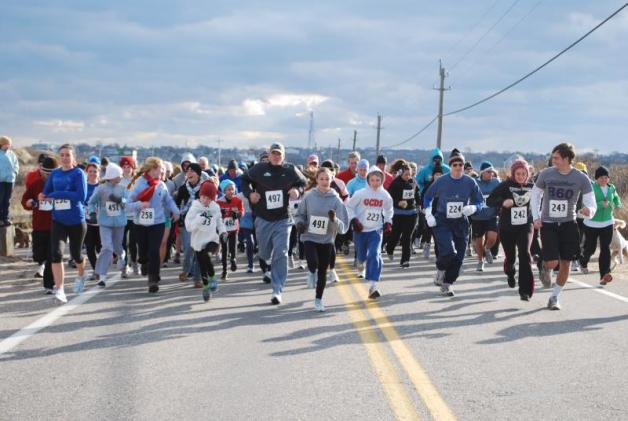 Block Island is a great place to train, whether it’s on the beach, on the roads, or in the water. The island is a small slice of heaven, particularly when viewed from an athlete’s perspective. It offers a respite from crowded city sidewalks and an alternative to doing laps in a pool. For the same reasons, Block Island is the perfect race venue for runners and triathletes; in fact, five races are held annually. As a year-round islander, I’ve had the opportunity to participate in each of the races at least once — and they don’t disappoint.

I think that most athletes who compete in Block Island’s races would agree: these events are celebrations of the island’s character. Whether you travel for hours in order to arrive at the race on time or you live a mile from the start line is immaterial — the joy of running, swimming, and riding in and around Block Island is truly unparalleled. And perhaps just as important is the sense of community that permeates such events. My dad, James Ortel, puts it well: “I love that so many of our community take part in the events, and that they relish the opportunity to relive their adventures later, sharing details with me about the highs and lows of competing…” These races connect people to the island, bringing them back each year to continue what quickly becomes a tradition. After all, there’s nothing quite like crossing a finish line on Block Island.

The island’s largest race is the Block Island Triathlon. It’s typically held during the first weekend of August and attracts about 400 participants. A quarter-mile swim is followed by an approximately 12-mile bike ride around the West Side of the island; the last segment is a four-mile run on Crescent Beach. But this wasn’t always the course.

When my mother, Marion Ortel, first did the “All-the-Way-Around-the-Block Triathlon” in 1988, she was one of 19 participants — one of whom was Peter Wood, the race organizer himself! When he founded the race, he says his intention was to create a race that would take participants around the island’s perimeter, while incorporating a triathlon theme — hence the original course’s unconventional sequence of swimming, riding, and running.

The race began on Charlestown Beach, with a swim around the jetty and across the Channel to Beane Point. Once on land, she and the other racers laced up their shoes — which were ferried across in a boat — and began a long and brutal run that took them below the vegetation line from Beane Point to the North Point to Surf Beach. She says that the toughest section was near the North Point: “That was rough. I think I still have the scar on my knee from wiping out!” At the Surf Hotel, the participants grabbed their bikes from the parking lot and road along Water Street, then up the Southeast Light Hill and around the South Side and West Side of the island. They left their bikes at the entrance to Champlin Road and ran to Charlestown Beach; the finish was at the jetty where they began. That year, my mom told me, “They only had beer and watermelon at the end!” No water.

Today, she says, “I feel like there are still people who do it for fun, but it’s a more serious race. Back then, it was Peter Wood getting a bunch of people together to enjoy the island…I still like the idea of going all the way around the island, but I can’t say I like one [course] better than the other.” Maybe she’s a little nostalgic: 1988 was the year she met my father and the year he won the race. He still does the triathlon every year. “Toeing the line at the Block Island races is always a thrill,” he says, “even some thirty years after my first BI Tri. The crowd support is phenomenal, the course unique and challenging. There are so many great races out there, but where else can I swim in such clear waters, or race barefoot up and down a gorgeous sandy beach?” I, the underachieving daughter, have only done the triathlon once — and it was a great experience, though I’d recommend not wearing shoes during the beach run, especially if the tide is coming in!

On the day after the triathlon is the Medical Center 5K Fun Run, a fundraiser for the Block Island Medical Center. The start line is at the Fred Benson Town Beach Pavilion, with an out-and-back course that takes runners down to Mansion Beach. Organized by Jim Hinthorn, the race was first held in 2011. Its length and location on the beach makes it fun and accessible for runners of all ages. After all, who doesn’t enjoy racing along the water’s edge on a beautiful summer morning?

September’s 15K Run Around the Block

The Run Around the Block is held in early September. The start line is near Fresh Pond, next to the Payne Farm Stand on Lakeside Drive, and participants cover two laps of the West Side of the island, finishing at Champlin’s Marina. It’s a hilly course and the weather is inevitably hot and humid, despite the fact that Block Island is supposed to be pleasantly cool and dry during the fall. I confess, I have the “home-court advantage,” since I run around the West Side of the island frequently. “We know every twist and turn,” my mom (a.k.a my running partner) says. “I never get tired of doing the West Side, so doing a race on the roads I’m so familiar with is awesome. I like that distance because you can settle in…I like it because it is challenging, with the hills and the heat.” We agree that one of the best aspects of the race is rounding the corner near the old West Side Baptist Church. This is traditionally where all of the islanders gather to cheer for the runners and offer them cups of water: it’s a big boost, especially on the second lap.

I first did The Run Around the Block at age 13. My house happens to be at roughly the halfway point — if I hadn’t been so determined to finish my first 15K, I might have just stopped there. Instead, I gulped a couple sips of water and kept running, trying to keep up with my mother, who didn’t seem to be suffering from heat exhaustion the way I was. (She’d promised to run with me, despite my slower pace.) I’ve done the race several times since, and though it hasn’t gotten easier, at least I know what to expect: a challenge!

This year, the race is to be held on September 7. It’s the 38th Annual Run Around the Block, Race Director Dan Cahill tells me proudly. He’s been in charge of the race since 1988. Like the Triathlon, the Run Around the Block has changed in course — and character. When Vin McAloon and Paul and Cathy Riker organized the inaugural Run Around the Block, it was a much shorter race: participants ran from Captain Nick’s down Corn Neck Road to the North Light and back. In 1979, the race was moved from the east side of the island to the west, where it is now. There are generally 300 to 400 participants and all of the proceeds are donated to the Batchelder Scholarship for island students. Cahill and his team of volunteers have raised $56,000 in scholarship money over the years. “Every dollar goes to students on Block Island. The race is really for the students…It’s all about community—and giving Block Island students the best chance to go to school,” Dan explains. And, he says, with characteristic enthusiasm,” There are a lot of people who have to be thanked! There’s no ‘I’ in ‘team!’”

The Turkey Trot, a Thanksgiving 5K

The Block Island Turkey Trot is held in November, typically the Saturday after Thanksgiving. It’s a 5K out-and-back course: participants run down Corn Neck Road from the start at Fred Benson Town Beach to the entrance of Mansion Beach Road, then turn around. The Turkey Trot is a great family race — and the perfect opportunity to run off that overstuffed feeling that often accompanies the holiday. There are generally between 100 and 170 participants, depending on how many islanders can peel themselves off their couches for a chilly November run!

Year-round resident Megan Hennessy says she started the race in 2005 and “every year we walk and run in memory of and tribute to Michael Coords, a member of the Hennessy family.”

The Shadbloom Race, a 10K in May

The island’s springtime race is the Shadbloom, affectionately shortened to “The Shad,” by its fans. It’s a hilly 10K run on Greenway Trails and dirt roads. Steve Brightman, a fixture on the Rhode Island racing scene, has done the race every year since 2001 and has won it multiple times. He says it’s his favorite race. “It’s like a little adventure: you get on a [ferry] boat, you go and do battle against the hardest 10K that I have ever run, against some strong competition… then you reward yourself with a night on B.I. The race is hard, it has something called ‘The Wall’…and it’s beautiful. The race is also very well organized…Robbie [Closter] does a great job!” About 200 participants run the Shadbloom, which Steve thinks is a “good number, not too chaotic.”

The race is, as professional triathlete John Hirsch famously described it, “epic without being silly.” As for Steve? He says, “If you can walk the next day, you didn’t race it right.” Of course, not everyone is as fast, or as competitive as Steve and John! But you don’t have to be an elite athlete to enjoy the scenery. The course is what makes the race: “There is only one Block Island. Every mile is different,” Steve explains. During Mile One, there is inevitably a head wind, while Mile Two covers a dirt road. On Mile Three comes the first big hill. Mile Four? Tough. The trail is “winding, turning up and down. You know the Wall is approaching…Mile 5: Hello Wall!”

What is “The Wall?” A very steep hill ascending from Rodman’s Hollow that manages to feel as though it is completely vertical, yet still has two sections. Mile Six, thankfully, is a beautiful blend of “rock walls, hills, boardwalks, tall grass, and open fields.”

The first year that Steve did the race, he says he struggled, heat and stomach cramps costing him precious time. He was determined to return the following year: “It was beautiful, it was hard, it hurt, and it beat me. There was no way I wasn’t going to run this race again. I had a score to settle!” And he did. As he says, “Every runner has a race that becomes part of their soul…Bill Rodgers had the Boston Marathon, and for me it is the Shad. I love Block Island. It’s one of my favorite places in the world; I was married there; I bring my children there. The Shad Bloom to me is Block Island: great people, extraordinarily beautiful and hilly. If one race defines me as a runner, I sure wouldn’t mind it being this one.”