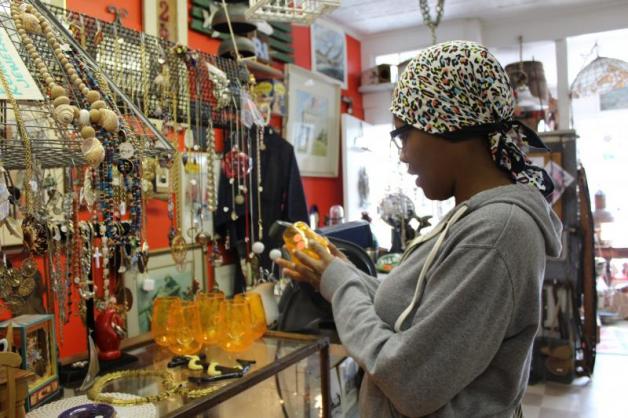 Above: A customer inspects glasses hand blown by Eben Horton (of glass float fame) “Below: Please don’t play dress up with the hats” Bottom: The Westinghouse Oven Roaster sits next to a collection of vintage Pyrex; ; the author says every day starts with the construction of a “tablescape” out front; vintage toys include a Talking View-master and games. Photos by Renée Meyer 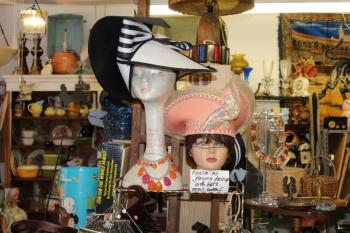 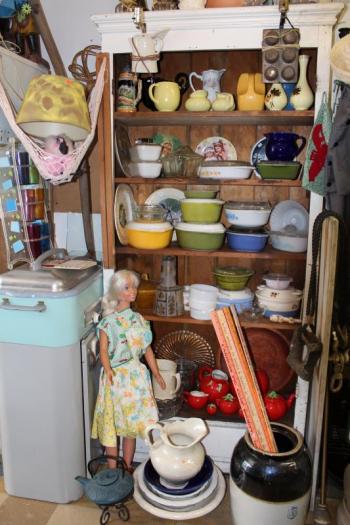 Some say going to Block Island is like stepping back in time. Stepping into Red Right Return on Dodge Street is like taking a second step back. There’s no signage indicating “Antiques Store” but that seems to be how people describe it.

“I’m at the antiques store” is an oft uttered phrase into cell phones by shoppers, or should we say “browsers.” Many people liken it to being at “Grandma’s house.” And then there are the ones who say: “I had this when I was a kid.”

Technically “antiques” should be 100 years-old. So in a way, this is more of a vintage store. Or curiosity shop. What it is not, is a haggler’s paradise. A sign reads: “Please don’t ask. Prices are firm. This isn’t American Pickers or Pawn Stars or Storage Wars.” Still plenty try.

There are beautiful things (vintage jewelry), whimsical things (a Talking View-master) and practical things (Foley food mills). I was in search of something in the latter category when I stopped by one day late in June. Store-owner Judy Clark needed someone to work weekends during the summer and upon being asked if I would be interested, I happily agreed. I do after all eagerly tune into PBS each Sunday at 8:00 p.m. to watch “Antiques Road Show,” no matter how pixilated the picture on the television.

And so my foray into the way-back machine began. Judy warned me that while girls will look, boys will pick up everything. And they do. So do the men, often lingering for a while after their spouses have moved on to the next clothing store. When they come back looking for them I tell them:  “They’re in the toy section.”

It’s not all colored glass and tea pots. There are old, mysterious tools, antique fishing gear, and vintage cameras. Some of these things lend themselves to a little game I like to call “guess that gadget.” Such is the mystery of the old nail-puller and the slate roofing hammer.

Michael Pollan, in his book “Cooked,” although writing about cooking the old-fashioned way says:

“I doubt it’s a coincidence that interest in all kinds of DIY pursuits has intensified at the precise historical moment when we find ourselves spending most of our waking hours in front of screens – senseless, or nearly so.”

Perhaps this explains the surprising number of young people exploring the store. Most have a unique style about them. Many are showing up in straw fedoras or trilby hats. Yes, they’re new, but could they be decked out with a vintage pin?

I’ve noticed a keen interest in old film cameras and accessories. One day there’s a young woman who has just graduated from high school, where she has studied photography for four years. She is moving on to Boston University, where she hopes she can find a darkroom to develop her black and white film. She’s looking for a camera. On another day there’s a young man with a vintage Polaroid camera slung on his hip. Previously someone has told me one can’t get Polaroid film, but this guy says that is not so. Fuji has acquired the rights and sells it. And then there’s the couple on the lookout for cameras for their six year-old nephew. He is autistic and loves photography, however he needs two cameras of the same type: one to take pictures with and one to take apart so he knows how it works.

Speaking of two of the same type, one day a man comes up to the counter with a vintage Foley food mill. “It makes the best mashed potatoes” he says. It’s not for him though — it’s for his grown son who wants to make mashed potatoes as good as he got at home. When I tell him there’s another in the back of the store, in case he wants to compare the condition, he ends up buying both. He has two sons.

In summer there are of course a lot of boaters visiting Block Island. Often they find themselves in need of something or other. One man needs a cheese slicer, because what else could be as pleasant as having cheese and crackers on the deck while enjoying the sunset over the Great Salt Pond? One woman is in search of a small hammock for extra storage on her boat. Yes we have that. Another needs a creamer – just the small metal type one finds in diners. We have that too. In fact we have three.

I have learned that when someone asks “Do you have any…?” to say “I don’t know, but come back in 10 minutes because I’ll probably find one right after you leave.” There is so much in the store, and Judy seems to sneak new old stuff in every morning before my arrival. Plus, things seem to move around. What was that Foley food mill doing in the front of the store when it should have been back in the kitchen gadget section, anyway?

One day it’s: “Do you have any door knockers?” I respond with my spiel about the ten minute thing. I don’t think I have ever considered just what a door knocker might look like when not attached to a door. So, I don’t actually go out looking for one….However, within the ten minute time-frame, a man who overheard my comment finds one — a brass door knocker in the shape of a fish. Turns out, the woman was his wife, and she does come back in ten minutes. Unfortunately, the woman in search of a salt spoon did not. I found several after her departure.

My favorite shopping success story though is that of the young man and the trumpet. The trumpet has sat, in its open case, on a stool where many knock into it, for a few weeks. It’s not that old, rather it’s a used student trumpet. One day about eight male teens enter the store, seemingly all at once. Most are together, and they don’t seem like the type who will stay long. But one, still in that gawky, skinny stage, is the lingering type, and he’s not with the others. I look up and catch his eye. He’s looking at me while testing out the trumpet’s valves. There’s a smile in his eyes, and I smile back. And then he disappears, only to come back a bit later, full of excitement and with his father in tow. The trumpet costs $130, but dad only has $110 and so goes off to find his wife for another $20. While he’s gone, we get to chat. I am of course curious as to why he wants that trumpet so badly. Does he want it to play in the summer? “No” he says. He doesn’t have time in between playing summer sports. He wants it for school. He lives outside of Montreal and must take an hour train ride each day to get there. When he gets off the train, he still has a 20 minute walk to go. Now he doesn’t have to tote his school-issued instrument back and forth every day, truly a score for him!

Personally, my favorite item in the store is the Westinghouse Oven Roaster, circa 1954, complete with manual and baking dishes. It’s a lovely, aquamarine enameled electric oven, with the “door” on top, complete with its three original baking dishes. (And it works.) The idea is that one can cook an entire three course family meal at once. Or, remove the baking dishes and rack and it becomes either a turkey roaster or a cooking vessel that can make a dish to serve 50 people. Of course the manual has recipes included, and this is greatly amusing to peruse on a quiet day. The tuna fish and noodle casserole is particularly fun. It calls for, among other things, eight cans (seven ounces) of “tuna flakes” and eight cans of condensed cream of mushroom soup. Oh, and eight cups of crushed potato chips or corn flakes.

Make sure to make Red Right Return a destination this September. There’s always something fun to discover. Just make sure to follow that old adage: “if you love it, buy it,” because as many have found, it may not be there tomorrow.

Red Right Return will be open weekends and on rainy days this September, from 10 a.m. to 4 p.m.