Restaurant 1879 at the Atlantic Inn: Shout it out! 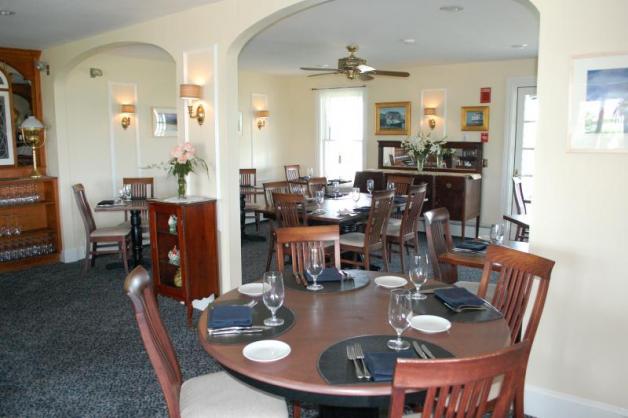 After a winter’s worth of renovations, the dining room is ready for guests with new carpet, lighter wall color, refinished tables, and comfier chairs. Wargo (sitting, right) and his culinary team; Brad and Brad Jr. in front of the bar. A garden table is set with two favorite spring appetizers — the shaved vegetable salad and the seared foie gras; for dessert a coconut panna cotta with macadamia praline, mango-lime sorbet, toasted coconut and passion fruit curd, garnished with basil from the garden. Photos by Kari Curtis 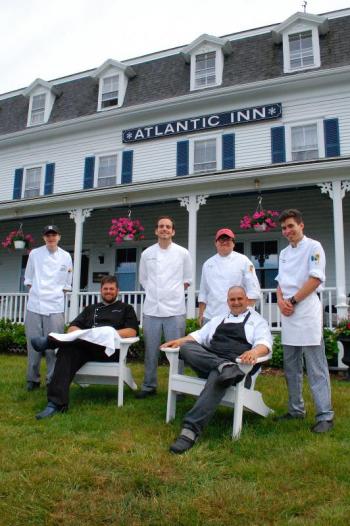 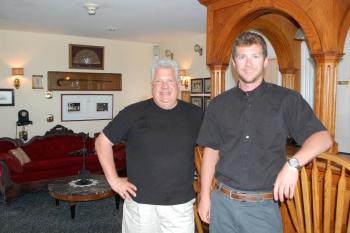 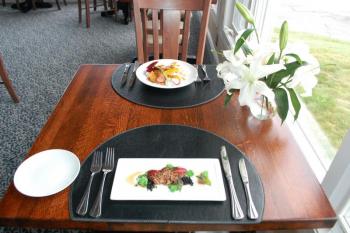 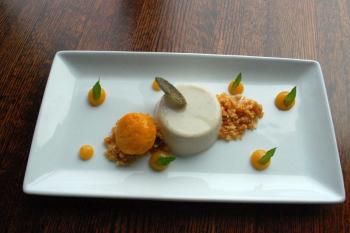 When it comes to special occasion dining on Block Island, the Atlantic Inn is on everyone’s list. But you shouldn’t wait for an anniversary or mortgage payoff to head to the beautiful old Victorian at the highest point on High Street, say the owners. They want their restaurant to be on everyone’s list for any-night dining, too. Even if you are just looking for a few appetizers (tapas) and drinks, they say, come and soak up those ocean views from on the lawn, at the bar, or even in what used to be the formal, full-dinner-only, not so long ago prix-fixe-only dining room.

To prove the point they’ve even given the restaurant a new name, 1879, for the year the inn was built, and a new look — one that’s stripped down literally and figuratively. For as long as most people can remember the dining room has looked the same: regal furniture, crisp white tablecloths, menu books taller than some of the guests. Beautiful and decidedly formal. “Everyone felt the need to whisper,” says Brad Marthens who owns the inn with his wife Anne. “When I ate here on my nights off, even I would find myself whispering,” chimes in Executive Chef Evan Wargo.

Last fall the trio, along with the Marthens’ son Brad Jr., began talking about making some changes. Wargo says he recalls asking what was under the multiple layers of paint on the tabletops beneath those white tablecloths. “The next day Brad Jr had a room blocked off for sanding,” says Wargo. The sanding revealed gorgeous quartersawn oak. The team, especially Brad Jr., spent all winter sanding, stripping, and staining the tables, pulling up carpet, and re-painting walls. New chairs were purchased, ones with cushioning and broad backs you can really settle into. The overall result is a room that’s still beautiful and elegant, but cozier and more inviting. “Ann and I have had the place for twenty years,” said Marthens of the changes. “It was time.”

They also felt it was time to promote Wargo. Wargo has been executive chef at sister restaurant, Eli’s, on Chapel St., for some five seasons. This is the first year he will hold the position at both restaurants. Wargo promises that the food will be “the same caliber, if not better, but not as complicated.” Then he corrects himself to say it will be complicated to make, but you won’t know it until you taste it. So no “foam” will appear on the menu, but there may be a little surprise flavorful foam garnishing an order.

Molecular gastronomy is popular right now, says Wargo, and if it improves a dish he’ll use it. “We want your expectations to be exceeded,” he says. When asked to describe a few favorite dishes, Wargo starts with the seared foie gras. It’s served with a pistachio sponge, pickled strawberries, oil-cured black olives, and black pepper sauce. “You get it all: sweet, sour, bitter, salty and spicy,” he says. People are loving the spring vegetable salad, too, he says in which he foregoes mixed greens in favor of shaved beets, carrots, radishes, fennel, and asparagus that’s served with whipped goat cheese. The roasted fluke has been popular as well; it’s prepared with braised leeks, Meyer lemon sauce, forbidden black rice, and capers. Among the fromscratch desserts popular right now is the strawberry and rhubarb crumble with an almond crumb topping and honey gelato.

Wargo says he’ll offer daily specials and change the menu every few weeks. He’s also offering a chef’s tasting menu, as well as a complete vegetarian menu on request, similar to Eli’s. It’s all about being accommodating, he says. “We want people to feel welcome, to feel comfortable, to come often.”