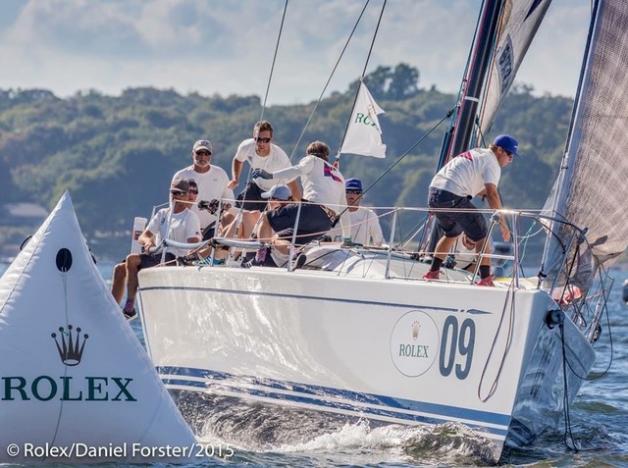 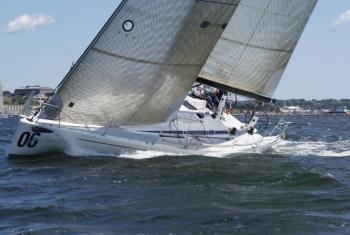 That’s the motto of the newly revamped Block Island Race Week, which is being hosted jointly by the Block Island and Duck Island Yacht Clubs in waters two miles to the west of the Great Salt Pond.

About 40 sailboats sporting a variety of colors, shapes and sizes, from regional yacht clubs will hoist their mainsails and cruise on a breeze out of New Harbor to do battle on the high seas. The navigable enjoyment of the competitors participating in the event is due to restorative efforts by a group of committed Block Island sailing enthusiasts who were intent on revamping an old Block Island-sponsored sailing race. Race Week is scheduled for Sunday, June 17 to Friday, June 22.

The Block Island and Duck Island Yacht Clubs decided to team up and form a joint partnership in order to restore the Block Island Race Week tradition. Fiorato said he and Berman began discussions about potentially hosting the event in 2016, but those discussions didn’t bear fruit until last year. That’s when, he said, “We kicked things into gear,” and began efforts designed to host the event.

“The combination of the two clubs is a good fit,” said Gallacher, who was key in organizing the event, and will be part of the on-water logistics committee.

“The two yacht clubs contribute different and complementary backgrounds and experiences,” said Fiorato. “The Block Island Yacht Club, founded in 2010 with the mission of ‘The Club That Gives Back to the Community,’ brings a knowledge of Block Island's business and community interests to the event along with the knowledge of the wonders and challenges of island living. The Duck Island Yacht Club, founded in 1932, brings much experience and knowledge of organizing and running races. Many of their members enjoy visiting the island for significant periods of time during the summer season. Together we complement each others strengths.”

As for who will be racing in the event, Fiorato said, “The off year Race Week tends to draw a more localized fleet from Long Island Sound up to Buzzards Bay. The fleet is comprised of generally smaller vessels due to the fact that many of the larger boats are participating in the Newport to Bermuda races. Our goal is to give those not competing in the Bermuda race an alternative adventure and to attract sailors that may feel slightly boxed out of the more traditional Grand Prix size event.”

Sailing crews competing in Race Week will be gunning for the coveted first-place prize from among a diverse field of vessels. Sue Reilly will be the Principal Race Officer and sailing aficionado Henry duPont will be Chair of on-water logistics. There will be two races per day for the majority of the fleet, starting at 11 a.m. and concluding no later than 4 p.m., to allow participants time to indulge in what Block Island has to offer.

The group’s inaugural event will be housed in a tent on Payne‘s Dock to accommodate race registration and the sale of merchandise and tickets. The week-long itinerary (Sunday through Friday) includes daily post race gatherings at the Block Island Maritime Institute, and Champlin’s Marina. Race Week will also feature the New England Multihull Association (NEMA) and Classic Yachts racing on Thursday and Friday, as well as daily trophy presentations.

Fiorato said the main reason for restoring the event is to have “people enjoy the island, while sailing in the race,” and give an “economic boost to the island.” He said the organizers benefitted greatly from consulting with the local island businesses in getting the event off the ground. “We didn’t have the expertise,” he said, noting that, “Local knowledge from the Block Island business community was key.”

“The level of sponsorship in support of this new event has been incredible,” said Fiorato. “Without the extremely positive response to our request for assistance for BIRW 2018, this event would not be possible. The support of so many business owners demonstrates their strong love for Block Island and a strong desire to contribute to the community.  We will be forever grateful to them for their generous participation.”

“The Block Island business community stepped up with its sponsorships,” said Torrey, noting that Race Week will “jump start” the summer season, and the July 4th weekend. “They’ve been very generous.” Torrey added that, “Jim Fiorato deserves the lion’s share of credit for the work he has done. He’s the super organizer.”

Torrey said he was excited about the Block Island and Duck Island Yacht Club-sponsored event. “We’re going to have a really good time,” he said. “We’re restoring a tradition.”

The organizers said they are looking for volunteers to help run the event. For more information about Block Island Race Week go to: www.BIRW2018.com.