In Search of a Snowy Owl 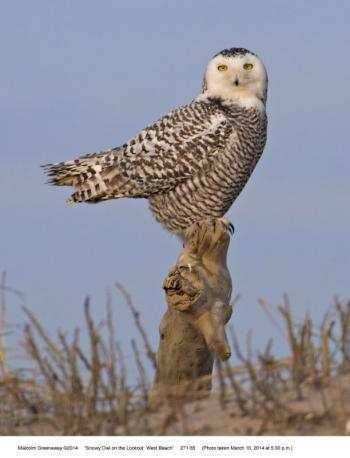 The snowy that Greenaway found along West Beach late one March afternoon. 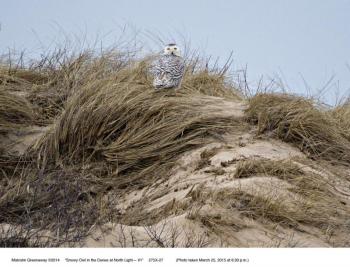 The winter has seen the explosion of snowy owls in the Arctic and a subsequent migration to the lower 48 states in search of food. Snowy owls have been showing up in places that have never seen a snowy owl before.

These magnificent birds started to appear all over the United States right around Thanksgiving — in Nebraska, in Kentucky — even as far south as Georgia. Dave Brinker, a biologist with the Maryland Department of Natural Resources, was shocked when he saw not one but two snowy owls on a small stretch of Maryland beach. “Something huge is going on,” Brinker told his colleagues. “We won’t see something like this for a long time — probably for the rest of our lifetimes.” This rapid population boom — called an “irruption” by ecologists — is the largest the East Coast has seen in 40 or 50 years (according to npr.org).

There have been articles in The New York Times and a snowy owl graces the cover of the current Audubon Magazine. Of course, snowy owls have been spotted on Block Island as well.

The Arctic is home to the snowy owl. It builds its nests on the treeless Arctic tundra, where it has an unobstructed view of its surroundings for miles out. And, with its telescopic eyes, it is able to spot virtually anything that moves over that expanse — in particular, the 3- to 6-inch-long lemming, a rodent that makes up 90% of its diet.

Interestingly, when snowy owls migrate south in the winter (and many do), they tend to seek out spots where the topography resembles that of their home. (As a result, for example, Logan Airport in Boston has had a major problem with snowy owls who find the open space and unobstructed view there appealing.)

With that in mind, I thought I might have my best chance of photographing a snowy here on Block Island if I walked along the shore, looking up at the dunes for one that might be gazing out at the ocean (no obstructions there).

And so, at the end of March, I ventured out to the end of the dump road, where I began walking north on West Beach in search of my snowy. Much to my disappointment, after walking a mile and a half, all I had seen were two swans swimming in the ocean and some sandpipers scurrying along the water’s edge. As I approached the North Light, I was prepared to give up and turn back.

But then, just ahead and protruding above some bushes in the dunes, was a white head. Could it be? I kept going to get beyond the bushes and there it was— a magnificent snowy owl sitting on the branch of a large piece of driftwood, peering out at the ocean. I raised the camera and started taking pictures, fearful that it would take off before I could get the shot. But it remained perched there. Quickly, disappointment turned into elation!