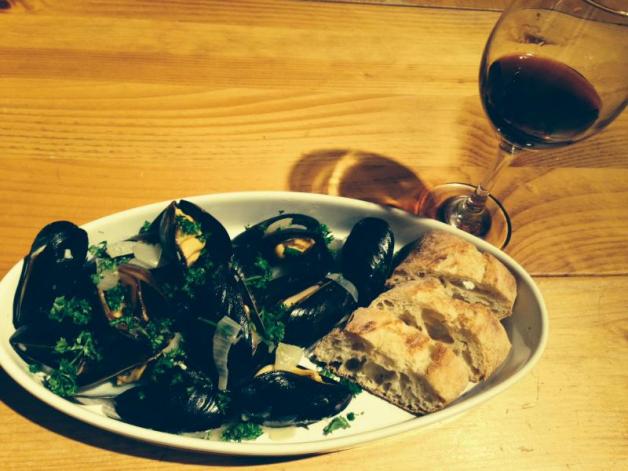 Above, dinner with lots of bread to soak up the sauce. My brother, Billy Middeleer aged 7-8, on the Block in the late 50s or early 60s usng a cast net to hold the shellfish under water until he put them in the bucket at Andy's Way (this was summer and there were no other people clamming!!!). 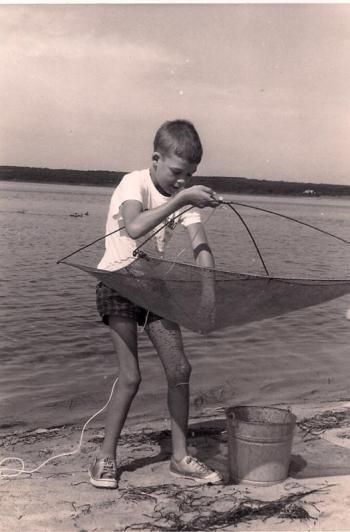 I first came to the island as a small girl in the 1950s. I loved its history, it beauty and its quiet simplicity. It captured my heart as a child and still does to this day. I feel especially blessed to have known the island before it was ‘rediscovered’ in the 1980s.

We stayed at Cuttings Cottages and life on the island was perhaps a bit simpler then but just as much fun. One of the things that we often did together as a family was to go clamming and ‘mouleing’ as my father called it, which, translated from his Americanized ‘Belgian-French,’ meant to go ‘musseling.’

We were fortunate because, back then, most Americans had no idea what a mussel even was, let alone about the delectable morsel the shiny black shells hid inside. We did, however, thanks to my father’s Belgian upbringing and as a result, we feasted as often we liked on that much-maligned mollusk, (Mytilus edulis) without any competition from all the clammers. In fact, Cormorant Cove was so full of the things that we often complained how difficult it was to wade out into the water because of all the mussels that were scattered about clumped together and attached to rocks — they could be very hard on the feet!

Evidently, prior to our recent discovery (and depletion) of wild mussel beds, the New England coastline was teeming with them. The mussel spawns a number of times a year between April and October. Triggered by a signal perceptible only to the female mussel population, each female mussel releases as many as fifteen million ova at a single spawning! As Euell Gibbons said in “Stalking the Blue-Eyed Scallop”: All this mad, molluscan love life naturally results in plenty of mussels. Sadly, not so true any more, due to pollution and their sudden popularity as a culinary treasure trove. However, the good news is that they are easily and sustainably farmed now.

If the mussel bounty on the island isn’t quite what it was when I was young, the good news is a trip to Finn’s Fish Market can certainly remedy that. (I should note, however, that if you do find some on your own, you should scrub them well before cooking them to avoid bits of sand or barnacle shells in your hard-won meal and pull out or cut off the beard that a mussel uses to attach itself to rocks. It’s harmless but not very tasty. Also, do not take mussels that are exposed at low tide. Take only those that are continuously submerged in seawater.)

I would like to share one recipe that can conveniently be transformed into several different meals from the original — handy if you have leftovers and hungry houseguests or even a cocktail party planned. I like recipes that are versatile and give one options to use up those pesky leftovers and this one is a winner on that score.

You start with, ‘Moules Mariniere,’ a French classic, which basically is steamed mussels in white wine, onions and herbs, which can be served over pasta and/or with a loaf of crusty French bread. Add to that a simple salad and you have yourself a gourmet meal! It’s quick, it’s easy and, magically, leftovers can be transformed into ‘Moules Ravigot,’ excellent as a cold salad or my own creation that I call Moules Canapés which are nothing more than mussels broiled on the half-shell with the Ravigot sauce on top.

One final, but important, note: Do not overcook the mussels! Overcooked mussels turn into rubber in the blink of an eye. You must watch your mussels carefully in the last stage of cooking. As soon as they start to open, they are done! It only takes a few minutes.

In a large pot with a cover (enough to hold all the mussels easily) add the wine, butter, onions, lemon peel and bouquet garni. Bring the wine to a boil and let it simmer for about 10 minutes.

Turn up the heat and when the liquid is boiling briskly, add your mussels. You might want to give the mussels a stir with a large spoon or give the pot a shake with the top firmly held tight (be careful not to spill hot liquid on yourself!) after about 2-3 minutes of cooking to make sure the heat in the pan is evenly distributed around the mussels.

Depending on the size of your pot, the mussels should be done in about 3-5 minutes. Watch them carefully!

Discard the bouquet garni and garnish mussels with the broth and onions and chopped parsley.

If you have any leftover mussels, make sure that you reserve some of the mussel shells to be used later for Moules Canapes or, you can make a lovely cold salad out of the remainder that can be served with a tossed salad or tomatoes.

Here’s where the improvisation comes in. How much sauce you need will depend on how many mussels you have left over. Only you can determine that, but the consistency of the ravigote sauce should be about the same as, say, for chicken salad:

Chopped (drained) capers (to taste, take care as they impart a strong flavor)

Combine ingredients to taste, add to mussels a little at a time, until they are the right consistency for your taste.

Serve with salad of your choice.

These little canapés are always a hit. They could also be served as a first course.  To broil the mussels, I would place the shells either on a wire rack that is placed in a baking pan (to help stabilize them) or on a thin bed of rock or course salt.

Enough mussel shells (half) for each mussel

Ravigote sauce (as above – making enough to put a generous dollop -- a teaspoon or more depending on the size -- on each mussel.)

Place oven rack in upper position in oven and turn on broiler.

Put one mussel into each shell and top with a dollop of ravigote sauce. Arrange mussels in baking pan on a rack or bed of rock or course salt. Place under broiler for a minute or two until just beginning to brown. Watch carefully!