Spring Street Gallery: Hoisting Itself into the 21st Century 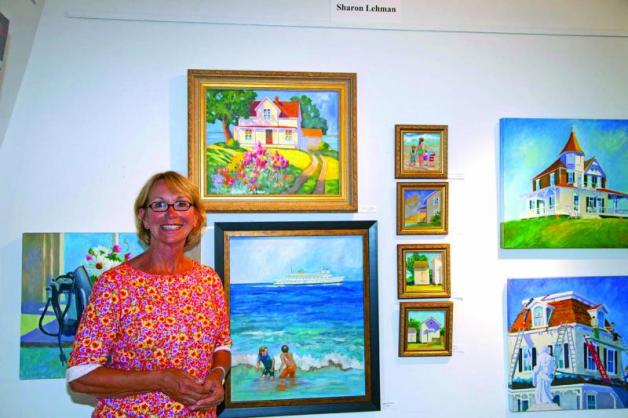 Sharon Lehman with some of her paintings. 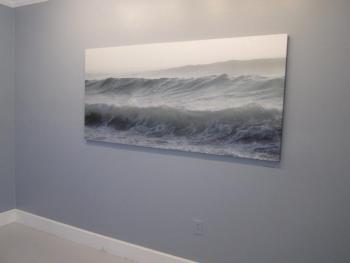 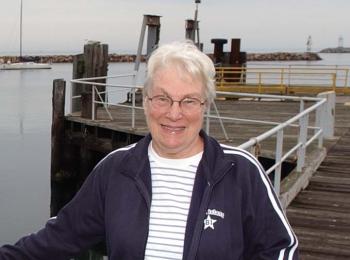 In a flurry of last minute sprucing and in the midst of mounting artists’ work, excitement builds among the artist-members of Block Island’s iconic Spring Street Gallery (SSG), as they prepare to open the doors to its thirty-second season. Having set up a Facebook page and with a website under construction, President Sharon Lehman says, “The SSG is busy trying to haul itself into the twenty-first century.”

Notwithstanding its outreach through social media, the gallery operates in an idyllic rural setting on the island. Sitting on the rise just above the Harbor Church, the historic carriage-house-turned-gallery welcomes hundreds of visitors each summer. A cooperative of local artists, “the Spring Street Gallery brings together those who make art with those who love art,” Lehman says.

The longest running gallery on island, the SSG was originally launched in 1982 under the auspices of Block Island Economic Development (BIED) and is folded into its non-profit status. The Harbor Church, the building’s owner, has allowed the SSG to occupy it in exchange for maintenance and a percentage of revenues. In an earlier configuration, the barn-like structure was a carriage house belonging to the Adrian Hotel, which formerly occupied the space now housed by the church.

The SSG mission is “dedicated to the professional and financial encouragement of Block Island artists.” In addition, Lehman says the SSG Handbook defines the following as prominent goals: to provide its members with “opportunities … to extend their art experience, increase their skills, share their understanding of art techniques and presentation to the public, represent themselves credibly in art exhibitions, secure fair and constructive evaluation and criticism of their efforts toward self-improvement and to promote good fellowship among artists and the general public.”

Lehman points out that in addition to the artists who share in all the operations of the gallery, Connie LaRue “has oversight of the day-to-day operations, acts as our manager, keeps us organized, unified and very happy.”

Each fall, artists apply for membership by submitting their work to be juried by a committee of members. Applicants must be full-time residents living on island for not less than three months and must commit to working a minimum of 30 hours a summer. During this time, artists must also serve on one of several committees that divide the work of gallery business, including building and grounds maintenance.

Lehman says, “We are pretty flexible,” indicating that one of the artists takes care of the gardens on gallery grounds, which “counts toward his required work time.” Artists must also agree to put in hours working in the gallery, which makes it possible to keep it open all day. Lehman adds, “Doing so also allows each artist to meet art lovers and gives them an opportunity to sell their own art.”

She says it also is part of an “educational process to meet customers, interact with them and talk about their own and other artists’ work.” The intention is “to have each artist learn something from belonging to the gallery,” Lehman notes. New members go through an orientation process that exposes them to all areas of the operation. This year, she says, they will each “have a mentor who will guide them in getting acquainted with the gallery and the operation.”

Photographer Grace Luddy, the former president of the SSG, believes that it has “risen to the challenge” of a community that serves artists within two populations. She feels the gallery has “become the creative home for both year-round artists and those who live here for the summer.” Both she and Lehman point out that many island artists beginning at the SSG have gone on to start their own galleries.

The collaborative of artists is “a very compatible group,” Lehman says, “interested in each other and supportive of each other’s efforts.” She says they make decisions as a group and the majority rules. If difficulties arise, there is a mechanism for resolving them.

The artists represent a variety of media: ceramics, jewelry-making, painting, photography and sculpture. In the past, many of the shows have been themed, and the first show of this year is no exception.Opening on Saturday, May 25, it is entitled “Red Theme.”

As long-time artist-member Jerry Powers says, “What that means is that we decided we were going to do a ‘red theme,’ and then [just waited for] the artists’ responses.” They will interpret the theme from their own perspectives, he explains. The second show, which is organized under a “Maritime Theme,” is scheduled to open on June 23 to coincide with Race Week. Again, artists will present their own interpretations.

Though the shows are rehung every two weeks, there is some overlap among featured artists during the second week when art is moved around to different walls within the gallery.

Having been with the gallery since 2000, Powers finds each year newly engaging. He adds, “I’m particularly excited about the variety of artists. It will be really exciting to walk in and see the art changing.” Powers, who experiments with different approaches, feels “there is never just one particular kind of art and only one way to make it.” He attributes this attitude to his years as a teacher. Though he’s been told his work is often reminiscent of Edward Hopper’s, Powers says he hasn’t set out to imitate him. Rather, he thinks they may share an outlook.

Lehman says each season the gallery schedules a New Members Show, to give the new artists “their first taste of public focus.” This year new members as a group will be featured during the third show, beginning June 30. Individual artists will then be highlighted throughout the rest of the summer.

The shows, Lehman says, “bring people in the door and let them look at art in a relaxed and non-intimidating atmosphere that they enjoy.” She adds that there will be food, wine and music at the openings.

The gallery has also developed educational programs that have “done well in the past,” says Lehman, among them a series of talks, lectures and demonstrations. Speaking of the latter reminds Lehman of “the time I did a painting demo on the gallery porch. Only two women showed up and I was disappointed; however, they turned out to be absolutely lovely and we all became dear friends—all from that demo.”

New member Merritt has suggested, and helped plan, cruises across the Great Salt Pond to be led by photographers Luddy, Langsdorf and others. The launch will go out at sunset on Wednesdays, he explains, with the professionals providing tips on how best to take photos that feature the play of sunlight on the water at end of day. To make reservations, those interested should sign up at the Block Island Maritime Institute earlier in the day.

Lehman says that Merritt, a painter, and “one of our new members, wants to give a painting demonstration on a regular basis during the summer.” She adds that gallery members want to do “outreach to the community, and [we] hope to get involved in events like student art shows in the future.”

The gallery has sponsored some of these in the past, and Jean Valentine has given painting lessons during the winter, using gallery space. Though Valentine has retired, Lehman hopes she may continue to offer those classes in the future.

This spring the gallery also hosted the Poetry Project, stressing the natural link between poetry, music and art within the community. Eileen Miller, a member artist of SSG for two years, was part of a drumming workshop at the gallery given by the Block Island Drummers, in which she and her husband Steve perform.

Of the gallery, Eileen Miller says, “As the oldest gallery and co-op, it has been very welcoming and helps developing artists.” She says she “loves that the gallery continues to bring in new artists.”

Lehman points out with the retirements of both Valentine and Eleanor Garrett last year, the gallery was left for the first time to operate without a founding member. Gratefully, she adds that Garrett has agreed to assist with opening receptions and act as an advisor.

Valentine speaks of the many years she’s been associated with the SSG as wonderful. “ It’s been a great experience—meeting different people and experimenting with new techniques,” she says of her time with the gallery. Though she will continue to paint, Valentine will do so “without the pressures of a show upon me.” She hopes the freeing up of time will help her get some work done on her home as well.

Looking back with nostalgia on her long affiliation with the SSG, Garrett says that in addition to showing her paintings she values the time she put into the gallery. “It was a wonderful opportunity and experience to interact with people from far-away lands and from close by.”

She remarks that there was great camaraderie among the artists, adding “We all worked together very well and, put ourselves heart and soul” into it. The most exciting moment at the gallery for Garrett happened a few years ago, when a customer walked in, looked at her paintings and said, “I’ll take all of them.” There were twelve and Garrett says, “I almost fainted.”

Now she’s looking forward to having more time “for doing stuff around the house.”

Of the turn-over in membership, Lehman observes that while there is regret over long-time members leaving, there is excitement “about the ideas that our newer members have brought to us and we’re eager to see how they work out.”

She adds, “There is a great history here, and we intend to respect it and go forward with a business that has been successful for over 30 years.”