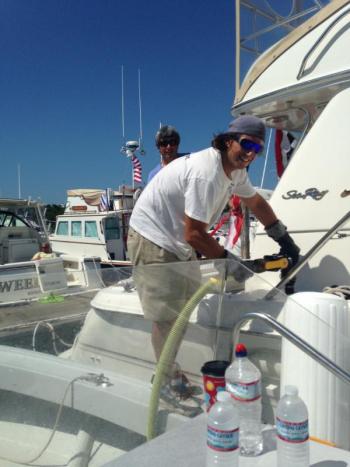 Ryan Koehler helps out a boat owner at Boat Basin docks near The Oar.

This job is not for the faint-hearted. It requires courage, stamina when dealing with unpleasant aromas, people skills, boat piloting abilities and fast reflexes. If the equipment fails, it may be necessary to jump quickly into the water.

Welcome to Ryan Koehler’s world of pumpout. On the Great Salt Pond, he is both captain and crew of the newest of four vessels equipped to empty the holding tanks of fishing boats, sailing yachts, and cabin cruisers that are anchored, moored or docked around the Great Salt Pond. In July and August, Koehler is in high demand.

To ride along as a guest on a pumpout boat is a leap of faith. This is after all a craft with a 420-gallon holding tank of its own, and a lengthy blue hose that looks like it should attach to a central vacuum cleaner. It doesn’t. The hose in question attaches to a guest boat’s holding tank and pumps raw waste into a tank on the pumpout captain’s vessel. Then the waste is schlepped to another site for disposal into the greater New Shoreham sewage system.

“You better wear a raincoat,” the harbormaster warns.

There are stories on Block Island of pumpout captains past, who did indeed make the ultimate sacrifice for the benefit of the Great Salt Pond. Just last summer a former captain was emptying a holding tank on a vessel when the hose detached. Spray from the tank covered her, and into the water she jumped. How long she stayed under is now the stuff of legend on the docks. Some say a good 10 minutes. All agree on the two words uttered when the former captain finally came up for air: “I quit.”

Koehler picks me up near The Oar restaurant docks in his spotless, white fiberglass craft. Coiled in the bow is the blue hose. A pair of hefty rubber gloves rests next to it. He steers the vessel slowly down a line of docked boats, checking the names. People know him and wave.

“You need to hose down if anything gets on you,” the harbormaster yells as we pull away from the landing. Koehler looks competent enough and I am not too worried. Perhaps I should be?

He maneuvers alongside a mid-sized cabin cruiser, ties up and boards. Greetings are exchanged with the visiting guest. Koehler wields his blue hose in one hand and the industrial strength gloves in another. He is dressed in shorts and a T-shirt, no raincoat, which must be a sign that he is good at his job. Finding the guest’s holding tank outlet, he opens it, puts on the gloves and gets down to business. With the flip of a switch the hose suctions stuff from one boat to the other. The mechanics definitely work, for the sea air takes on a decidedly aromatic smell that is not marine in origin. Finished, he carefully detaches the hose, dunks it in seawater to rinse it and then coils it back on the bow of the pumpout craft. He carefully takes off the gloves and places them next to it. It is important on this job to be both careful and methodical.

When training the pumpout captains, the harbormasters remind their team that they must be unfailingly polite. This is a nasty job but one of few on-boat jobs, so it’s also one of the most popular and sought after on the island. Three of the four boats are on the pond on a busy summer’s day to handle all of the needs of visitors. One boat regularly works the rafts of boats docked on a busy summer weekend. That boat is busy all day and barely travels more than 100 feet.

Sometimes it can take an hour or two for a pumpout boat to reach a yacht, depending on the queue of vessels waiting for service. The mornings are a busy time. When your boat is serviced depends on who called first, a concept not easily grasped by all. Consider the story of the woman who last summer called repeatedly over the marine radio for a pumpout. Her calls increased in rudeness, even though the pumpout captain told her it would simply be a while until he could help.

“Go home, lady,” other boaters told her, by radio. In other words, be kind to the pumpout crew. And the yachtsmen and fishermen who know the pumpout team will defend them when necessary. The lady and her boat left without a pumpout. The captains had been unable to get to her that day because one of the three boats was down for servicing.

On Koehler’s beat, the docks, there are mostly cabin cruisers both small and large — the sailboats tend to prefer moorings. The pumpout crew begins work at 7 in the morning and goes until 7 at night. The number of boats each can service before it needs to be pumped itself depends on the sizes of the holding tanks emptied. The first three assisted today are mid-sized cruisers, probably with tanks that are 30 to 50 gallons. The last, before I leave for the shore, appears double that size. Sure enough, the owner tells me it’s a 100-gallon tank.

This is impressive. As part owner of an old Catalina 30, our holding tank is 15 gallons. Koehler, however, is nonplussed and hooks up his hose. The owner and his wife are on vacation from Paxton, Mass. The husband helps Koehler get the hose fixed to his vessel and the pumping begins. Given the size of the tank, it is going to take a while. Mark and Linda Berube, owners of their cruiser Americana, bravely pose with Koehler for a photo. Big fans of Block Island, they know Koehler by name. He has helped them out before. In all cases, the person assisting the pumpout captain on their boat is male. Such is the case on our Catalina 30. We women seem for the most part to have an aversion to this one particular task.

The job done, Koehler cleans and wraps up the hose and reboards his craft. He pulls into the dock so I can disembark before heading out again. I carefully circumnavigate both hose and gloves before jumping off the bow. One of the boat owners lends a helping hand in the leap from boat to dock. With a wave, the pumpout captain is off again. This is the Fourth of July weekend and he is really busy. I walk back toward The Oar and encounter the harbormaster.

“You get anything on you?” he asks. This question, I think, is too good an opportunity to let pass by.

“You’d better wash that right away with bleach,” he says, as I leave.

By such interactions Great Salt Pond tales begin. And sure enough, the next day someone says they heard I had to wash my foot off after a ride in the pumpout boat.

Just to keep the record straight, Koehler did his job flawlessly, and my feet, sandals and the rest of me stayed clean and dry. But don’t tell the harbormaster.