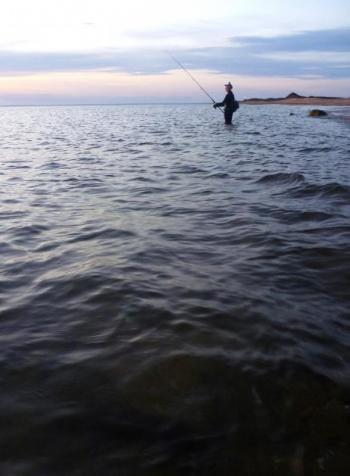 The author casting at sunset at the end of West Beach Road. 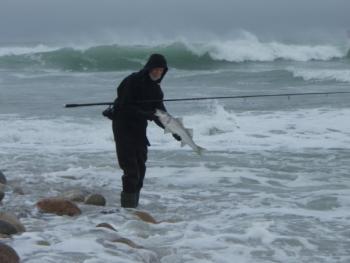 I’ll always remember the first striped bass I caught while surfcasting on Block Island. It took place in 1985 when my wife Karolyn and I visited the island together. I had gone into Twin Maples Bait & Tackle to seek advice on where to fish. Shop proprietor, the late Mac Swienton, gave me sound advice and told me to fish from Ballard’s Beach near the Old Harbor jetty at dusk.

I did what he said and caught my first Block Island striper, a fine 25-pound specimen, on only my second cast on the island. Little did I know that within moments of catching my first island bass I had contracted a severe case of “Block Island Fever,” a very desirable sickness for which there is no cure… and only future trips to the island would ease my symptoms. Having surfcasted on the island now for over 20 years, I’ve taken many of my largest striped bass here, two of which were over 50 pounds.

Surfcasting for striped bass on Block Island is a pastime practiced by islanders and visitors alike. Generally the bass start to arrive in island waters when the shad bushes bloom, say early to mid-May. Peak summer fishing occurs mid-June through July and then again during the autumn migration from mid-September to Thanksgiving.

Striped bass range in size from 16 inch “schoolies” to the legendary Block Island “cows” that can weigh 50 pounds or more. Generally 5- to 15-pound fish are the average size caught from the Block Island surf, and 28 inches is the minimum legal length for keeping one for the table. Many island surfcasters practice “catch and release” when fishing for striped bass. For these anglers the motivation is not in the kill, but the sport of catching the bass, then letting them go unharmed.

Block Island has 17 miles of coastline, which makes it a perfect size for surfcasters — large enough to find solitude but small enough to fish much of it in one tide cycle. Tides can play a major role in island surfcasting but other variables exist such as wind speed, wind direction, current, and surf conditions. A good general rule that I like to follow is to fish the southern and eastern sides of the island during incoming (flood) tide and the west side and north end during outgoing (ebb) tide. Of course striped bass do not read my general rules so surfcasters should be flexible in their approach to island locations.

As mentioned, wind and surf conditions should also be taken into consideration as they can play a major role in whether you’re successful. I tend to fish the windy side of the island (within reason) as wind will push warmer surface water into an island shoreline. This warmer water will start the food chain as small baitfish will gather near shore to feed on zooplankton in this warmer water, the baitfish in turn attract the striped bass.

Current (the lateral movement of water) is the last factor to mention. Some island locations have noticeable current that striped bass and other game fish use as feeding stations. Strong currents sweep baitfish into areas where striped bass wait to feed. Some of the more popular island locations with current include the New Harbor channel, the cobble bar at Southwest Point (where I took my two largest island stripers) and the North Rip at Sandy Point. These areas are prime striped bass habitat but surfcasters should use extreme caution while fishing them as the swift currents can easily sweep away an unsuspecting caster. Striped bass can be caught at any time of day but dusk, dawn, and especially after dark, are the prime times for success. As striped bass are often wary during mid-day, they will prowl the shallows to feed during these low light conditions.

Ballard’s Beach just outside the east seawall of Old Harbor is a popular and fairly easy location to fish. Mostly sand, it offers a fairly safe location to cast your lines, especially if fishing with children. Prime time in this location is when beachgoers have gone home, last light, first light, and hours of darkness. The small jetty (locally known as “the chute”) off of Spring Street can also be productive. Caution is advised here as the jetty stones are very slippery and the surf can be dangerous. Because of this it’s not a place to bring younger children. Wearing spiked footware is highly recommended to prevent falls here and at other rocky locations.

The shoreline under the famed Southeast Lighthouse can also be very productive. Access is down the long staircase at Mohegan Bluffs. Moving further west are areas named Snake Hole and Black Rock, classic striper water. Paths lead to the shoreline here but caution is advised due to bluff erosion.

On the west side of the island are four roads that lead to the water and in turn to striped bass. The ends of Cooneymus, Dorie’s Cove, Grace’s Cove and Coast Guard (Champlin’s) roads offer access to the more protected west side surfcasting locations. These protected shorelines are better suited for children and offer great locations to catch striped bass while enjoying an incredible Block Island sunset. The end of Coast Guard Road also provides access to the New Harbor Channel of the Great Salt Pond, which is probably the most popular and “family friendly” island location to cast a line, not only for striped bass, but bluefish, summer flounder, scup, and false albacore.

Further north on the island’s “Neck” there is surfcasting access to West Beach via West Beach Road off of Corn Neck Road. Locally referred to as “the Dump,” this access point is adjacent to the island’s transfer station. A great location to catch a sunset, this area consists of a long cobble shoreline that gets sandier as you go right or north. Striped bass can be anywhere from the Dump all the way to Sandy Point and the North Rip. (Caution!!! Novice surfcasters should not wade or swim at Sandy Point as strong and dangerous rip tides exist here.)

The very northern end of Corn Neck Road also provides walking access to Sandy Point and adjacent Cow Cove as well as the rocky structure of Grove Point and areas south to Ball’s Point. This rocky stretch is more difficult to fish but can be very productive. Also off of Corn Neck Road is Mansion Road, which provides access to surfcast the east-facing Mansion Beach, a beautiful and productive location where you can also enjoy a sunrise while you catch stripers.

Many of the easier locations on Block Island can be fished in a pair of shorts and sneakers. Serious surfcasters will use chest-high wading boots or even wetsuits and equip them with spiked footware to prevent slipping and falling in the slick rocky areas. These enterprising anglers can be seen wading (or swimming in wetsuits) to offshore rock perches in search of large bass.

Many surfcasters will use artificial lures to fool island bass. Perhaps the most popular lures are called needlefish plugs; I’ve taken a majority of my island stripers using them. They range from 6 to 9 inches long and weigh 1 to 3 ounces. Needlefish are slim profile lures that imitate sand eels, the most prevalent baitfish in Block Island waters that striped bass feed on. Pick up a few needlefish lures in a light green or yellow pattern and maybe a dark color shade like black or purple. They are a simple lure to use; just cast them out and reel in slowly. Expect strikes at any time as bass can be in as little as 2 feet of water and only a rod length away from shore.

Other popular lures are 1- to 2-ounce poppers that splash when retrieved, attracting interest from nearby bass. Poppers are mostly used during daylight. Swimming lures such as Bombers, Rebels and Redfins, have a realistic wiggle when retrieved and they fool many island stripers. One-half to 1-ounce lead head bucktail jigs in white, and 1- to 2-ounce metal lures like Kastmasters or Hopkins round out a good selection.

Another popular item to use is a soft plastic lure called a “Sluggo,” a great imitator of the abundant sand eels. This is generally weighted with a half-ounce lead head and is extremely popular in the Pond. One of the most popular methods of catching really large striped bass is using live eels for bait. Use them the same way you would fish lures: Hook them with a 7/0 size single hook in the head, cast them out, and reel them in slowly. Other natural baits such as squid, mackerel, and pogy can be used on a sliding sinker rig or with egg sinkers rigged on a 7/0 hook. Most of the above-mentioned baits and lures can be purchased at Twin Maples Bait & Tackle off of Beach Avenue. Twin Maples owner John Swienton is also in touch with the latest surfcasting reports and can tell you where the latest hot bite is.

There you have an overview of Block Island surfcasting. Enjoy your time surfcasting on Block Island and please remember to be respectful of local property owners where you access the shore. Litter should be carried out with you. Leave only your footprints. Tight lines!

Dennis Zambrotta of Newport is a veteran surfcaster who has pursued striped bass for most of his life. He has visited and surf fished Block Island for more than 25 years and recently authored his first book, “Surfcasting Around the Block,” available on Block Island at Island Bound Bookstore and Twin Maples Bait & Tackle.