Taking a Walk Around the Block — Literally

The author joins a group of women who circumnavigate the island once every summer
Brooke Hammarskjold
Sun, 09/01/2013 - 8:45am
Category:
About BI, Nature, Four Seasons, Explore, Family Activities, Recreation 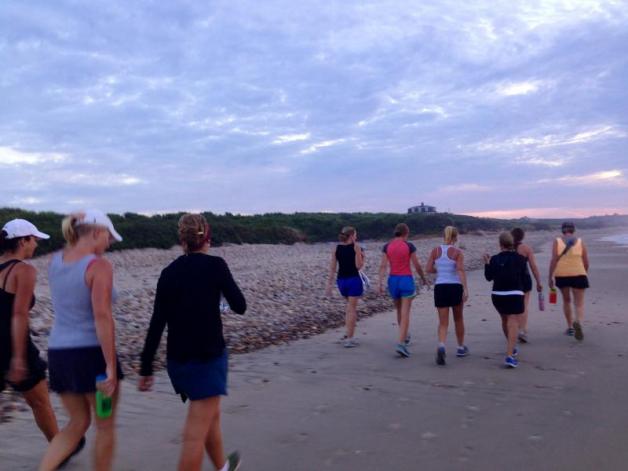 The group leaves Scotch Beach at 5:30 a.m. as the sky begins to lighten. Photos by Brooke Hammarskjold 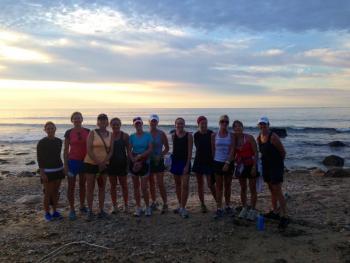 For the past three summers, I have watched as a dozen or so women, my mother among them, embarked on the challenge of walking the entire perimeter of the island. So this summer, when I was encouraged to join them in their “adventure,” as they call it, I agreed without thinking much about what exactly it would entail. All these women are dedicated walkers and runners, but as a frequent runner myself, I was not too nervous about the physical toll it might take. It was not until the night before, when my mother explained to me that they planned to do it in around seven hours, that I realized how challenging a feat this 17-mile adventure would be.

My walking companions have known one another for more than a decade. Most are summer residents on the island, with winter homes everywhere from California to Brooklyn.

They got the idea for the walk when a number of the women’s husbands decided to see how fast they could walk the perimeter of the island. Later that summer, several of the women proposed the idea of trying to beat the men’s time. They soon gathered a group of 15 mothers and organized the event as a fundraiser for the Block Island Club. Although they did not beat the men’s time, they did raise around $500 for the Club, and consider themselves the winners as they have continued to walk every year while the men have not. As Alicia Hammarskjold put it, “The men may have beaten us three years ago in time, but we are the ones still plugging away.”

Since then they’ve preferred to just walk for fun, so they are able to enjoy the vistas and each other without having to worry as much about keeping to a pace.

“The first year it was less appreciation and more of a race,” says Beth Beinkampen.

Since that first summer, though, little else has changed about the walk. Different people have come in and out, there’s always three or four new people… and it’s always nice to see the new faces,” says Hammarskjold. “Each year it’s such an open, welcome event and I have a chance to talk with old friends, but also to reconnect with people I don’t know as well,” adds Beinkampen.

This summer, we all met at Scotch Beach at 5:30 a.m. on the first day of August, a Thursday, and promptly headed north past Mansion Beach toward the North Light. In previous years they’d walked in the opposite direction, but wanted to change it up a bit. Walking only on beaches was a challenge as we had to clamber over the many rocks that make up the northernmost shore. We took a three-minute water break at the lighthouse as the sun began to rise.

Continuing south on the western side of the island, we soon made it to the channel of the Great Salt Pond — it had been about two-and-a-half hours since we set out. This part of the walk is a favorite of many in the group as each summer they have decided to swim across the channel in order to completely circumnavigate the island on their own. However, two men did meet us with a dingy to transport our shoes, cameras and such across. This year the swim was especially enjoyable, says Susan Stover from Simsbury, Conn., because “not only was it refreshing, but there was not a lot of boat traffic,” since it was earlier in the day.

Although the journey was long, conversations were never lacking, with topics ranging from food to sports to books. Walking south, the women chatted about the varying levels of damage across their towns from Hurricane Sandy, shared advice on how to make the best crisps using the island’s blackberries and argued over which characters they liked best in “Mad Men.” This walk was no dawdle, though, and I was surprised to see how fast we were walking as we continued south. Eventually, the group ended up spreading out over about an eighth of a mile, yet all maintained a steady, quick pace throughout.

Once we reached the southwestern beaches, many of the walkers noted that they seemed much sandier than in years past, making them more enjoyable to walk on. “I saw a lot more this year, and I think that was because of all the sand there was this year, so I wasn’t focusing on my footing on the rocks the whole time,” said Stover.

That soon changed once we passed the Mohegan Bluffs. The beaches on the southeastern side of the island were extremely rocky due to the boulders used to protect Spring Street from hurricanes. The rocks forced us onto the paved road from St. Andrew Parish Center to the Spring House. From there, we remained on beaches as we closed in on hour seven, feeling exhausted and ready to be done. A quick drink shared among all at Ballard’s got the crew through that last half-hour push to a finish at Scotch Beach.

Although physically exacting and at times downright unenjoyable, a majority of this group say they will continue to walk every summer. Stover admits one reason is to “be able to say we did it again, because honestly I didn’t enjoy every minute of it!” However, she continues, it is “a great way to spend a day with your friends and to see parts of the island you’ve never seen.” Beinkampen agrees, noting that, “You get caught up in the day-to-day here, and it’s a great way to remember what a spectacular place this is… you get to see parts of the island that you don’t see during your daily routine… and beyond that, it’s this wonderful seven hours with no cell phones or outside commitments getting in the way and, again, just a great way to spend the day with friends.”

Looking back, there were parts of the walk that did make me want to quit, such as the tedious toll of scaling over rocky beaches and the final stretch along the sand in the 80-plus-degree weather. However, what made the walk worthwhile to me was the stunning scenery, such as the beautiful sunrise.

For that reason, I definitely plan to walk in the years to come and encourage others to do so either with their own group, or with this group of women who, I can attest, are always welcoming to newcomers.