Tasting the Colors of Block Island with Peter Gish 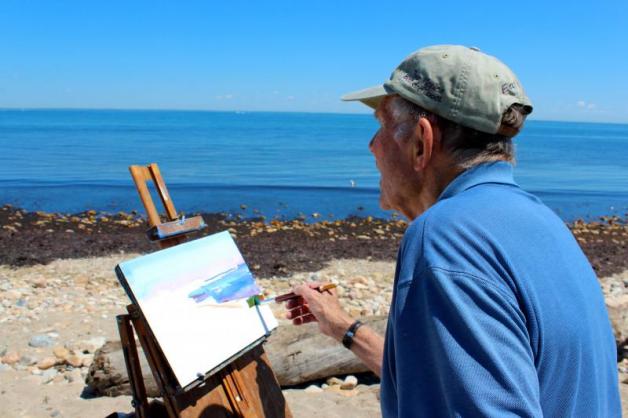 Gish cranes over his beloved French easel, filling in details of the beach before him on a hot July afternoon. 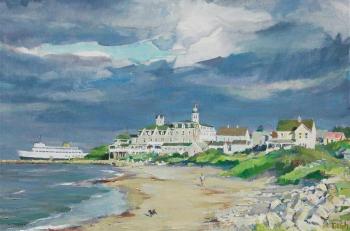 “I like to think of painting like cooking, you have to taste the colors,” Peter Gish tells me as he tears off another “tasting sheet” of watercolor paper. The paper falls into place in the center of his palette, and he sloshes orange and maroon together, attempting to find the perfect combination to capture dark shadows of iron-rich sand. Gish is a retired professor of painting at Fairfield University, a post he left in 1992, after 21 years, so he could “get to work.” Today, at 86, Gish has the time to paint, a calling he couldn’t devote ample time to during his years as a full-time professor. Since 2002 he has resided in Saunderstown, just a few blocks from the Jamestown Bridge, where an abundance of seascapes confront him, and he has a full studio to muse in. Still, he says, nothing compares to Block Island.

Gish was drawn to the island in 1979 and has been returning ever since, armed with a Jullian easel and an Eat Fish hat to ensure he can work through the afternoon sun.

On the day we set out together, the island is buzzing in preparation for July 4th. After discovering there is no parking left in the Mansion Beach lot, we let go of those hopes and continue on to Peter’s most frequented spot, what he refers to as the “walking path” at the North Light.  Gish certainly has the procedure down to a science. There was a time when he could effortlessly cart his easel, as well as three or four bags of supplies down any beach. Although that’s no longer the case, this Marine Corps colonel who has two knee replacements under his belt, has hardly let that stop him. The newest addition to the parade is a cart with huge gray beach wheels on it. We pile everything onto the cart in the parking lot, which is swarming with thirsty bikers, then strap it down and start our trek.

The right place
We are about halfway to the lighthouse when Peter feels he has found the spot, complete with a massive driftwood log that will serve us well should we need a place to chat. Dabbling in acrylics and oil, Gish works primarily with watercolors, and this day is no exception. He opens up his French easel, which although heavy to carry, folds in a practical way for travel. It’s the only kind Gish uses, and he’s had more than he can count, somewhere in the 20s he guesses. Aside from “Mr. Jullian’s easel,” Gish can’t work without a tuna fish can. If he plans to be out through mealtime, he packs one for lunch that later serves as an ideal water dish.

The first thing he notices is a sailboat rounding the point. He deems it “a nice touch of white against the sky,” and pencils it in immediately. The first step is sketching with a pencil. He doesn’t want to draw too much, but stresses the importance of placement. “Even with a portrait, you can do the most beautiful nose but if it’s in the wrong place...,” explains the man who at one point thought he would make his living as a portrait painter.

Out here Gish sticks to landscapes. He enjoys painting similar scenes on the mainland, namely at Beavertail Lighthouse in Jamestown, but the island has been such an important part of his life since he discovered it because he is “really inspired by the light; the blue is so luminous.”

The North Light is high on his list of destinations because there is no chance of asphalt getting in the way. His other favorites include the stretch of beach in front of the Surf Hotel, many of the buildings along Pilot Hill Road, and the Mohegan Bluffs. As he momentarily inverts the piece in front of him to avoid the purple lining of the sky from running into the crisp dunes, Gish tells me that en plein air painting is “more like a Rothko,” meaning the artist’s task is to “sit down and let it fill your spirit.”

During this process Peter fails to notice the passage of time. He calls three hours a solid day, “which is fortunate since I get tired, but I don’t know that until I’m done.” Once the light changes he can’t work on the same piece, so is forced to return to the studio and be patient until the right kind of day comes around again. He tells me about just such a painting, of the North Light, waiting to be touched up in his home studio. It’s not a preferable method but he has to stop once the light shifts, which happens in the short hour we’ve spent on the beach.

Art during wartime
The trigger to pursue art was the untimely death of his barely older brother, whom he was very close to, early on in WWII. After the war, Gish finished his degree at Dartmouth in 1945, where he had been sent for fighter pilot training. After stints in Paris, Madrid, and Salzburg, he continued his education at Yale, receiving his MFA in 1965. He tells me that his hearing loss has nothing to do with age, but is a result of the short time he spent as a helicopter pilot. Watching him load up his gear and pull it down the beach, and realizing that he normally does this alone, I don’t doubt him for a moment. He speaks proudly of his career with the armed forces, thrilled to have served his country in WWII, and to have had the privilege of returning for limited tours in Vietnam, Iraq, and Somalia. His work as a combat artist won him the Marine Corps Award for Best Art in 1972.

In the nearly seven decades Gish has been a presence in the art world, he has seen tremendous changes. It’s “too conceptual” now, he says, schools seem to teach how to think, rather than how to do. Gish explains that he didn’t think about what he was going to paint today before it was in front of him. “Vincent van Gogh said something about painting what he sees; so essentially what I do as a painter, when I’m behaving and not imagining an audience, is respond, I respond to what I see.”

Being a painter who likes paint, and using it in response to the world around him, is the simple truth for Gish, whose creations are far from simple. His greatest influences come from Winslow Homer, whom he feels a particular affinity with as a fellow military artist; Goya; Matisse; Rembrandt; and Mondrian. “Anyone who paints today is a post-impressionist, because we’re all responding to what we see,” he says.

Gish will share what he sees with the island Aug. 17 through Sept. 16 in Jessie Edwards Studio above the Post Office. An opening reception will be held on Saturday Aug. 18, from 5 to 7 p.m. This will be Gish’s third solo show in the smaller room of the gallery and he hopes to continue having one once every two years. As the message on his easel reads, for the times he abandons it to seek out some lunch: “I shall return.”